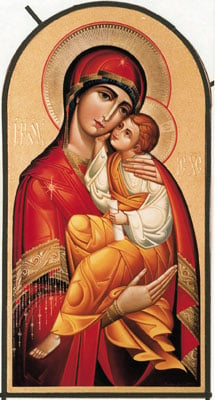 (RNS) This month, as Christians set up their creches and assemble in churches to hear the story of the Nativity, one line, from Luke 2:19, speaks particularly to women: "But Mary treasured all these things, and pondered them in her heart."

This Mary -- silent, obedient, observant -- has echoed down two millennia, cementing a potent ideal in the Western imagination. Now the masterful Irish writer Colm Toibin puts a jackhammer to the cozy, safe, Christmas-card version in "The Testament of Mary." He imagines the mother of Jesus many years after the Crucifixion, living alone in the ancient Asia Minor town of Ephesus, where two of the Gospel writers supply her with food and shelter. They come to her with regularity. She is not cooperating.

"They appear more often now, both of them, and on every visit they seem more impatient with me and with the world," Toibin writes in Mary's voice to open his story. "They think I do not know the elaborate nature of their desires. But nothing escapes me now except sleep. Sleep escapes me."

For those brought up among statuary of the Virgin Mother, this opening is nearly irresistible. Toibin's temerity is a shock, of course, but it pairs with an avidness to imagine a Mary who speaks, and to hear what she might have kept locked away in her heart.

Just as the historical record indicates a physical Jesus existed, so must he have had a mother, a woman who ate figs and oranges, pulled water from a well and sweated in the Mediterranean sun.

Toibin's Mary is long widowed, illiterate, handy with a knife. She doesn't think Jesus' death was "worth it." She dwells with "the remnants of a terror we all felt then." Like other traumatized people, she "has forgotten how to smile," and also, how to weep.

But she remains keen, and cool to the disciples, whom she dismissed from the first day as misfits. When Jesus was arrested, she remembers, they were useless: "fools, twitchers, malcontents, stammerers, all of them hysterical now and almost out of breath with excitement before they spoke."

In a few phrases, then, Toibin hints at the fanaticism that roiled around Jesus. The writer is brilliant at suggesting the ratcheting political dangers that squeezed Mary's son -- from the Romans, from the rabbinate. Word of this peril reaches the reader as it reaches Mary: via an untrustworthy "cousin" who arrives at her remote, country doorstep during Jesus' final year.

This man, Marcus, has news of Jesus healing the sick, but that's not what causes Mary's fear to quicken. She, who has loved the Sabbath all her life, is focused on Marcus' report that Jesus and his unruly friends "caused a fuss and made a crowd gather" on the holy day. This breach, not the lame walking, rouses her to intercept Jesus at Cana.

So Mary does what mothers of countless wayward sons have done: She tries to talk him into averting disaster. She hasn't much interest in wine. In "The Testament of Mary," Toibin's radical shift in perspective is thrilling, defamiliarizing the familiar tale. Mary gives us a very disturbed Lazarus, his sisters Mary and Martha -- and they rivet us anew.

This novella, which was staged last year as a lauded play in Dublin, contains a couple of florid notes -- Mary, at her life's end, for instance, won't say Jesus' name. Toibin writes beautifully, but he doesn't truly cross the frontier of her body. He gives us no purchase, interestingly, on knowing her as a character with a uterus.

Yet the writer does chisel away at centuries of plaster-of-Paris Marys. He succeeds in dissolving some of the oil on canvas that encases a historical figure.

Very early in the book, Mary takes stock of herself: "I realized from the way my breath came and the sudden slowness of my heartbeat that it would not be long before all the life in me, the little left, would go, as a flame goes out on a mild day, easily, needing only the smallest hint of wind."

This is not the Mary ascending on a cloud, escorted by angels. But this is a Mary wholly worth attending. In his hammy, page-turning way, Dan Brown intuited that "the sacred feminine" was a hole in the Christian story, one that millions of readers relished filling with a conspiracy.

"The Da Vinci Code" was entertaining, and completely foolish. "The Testament of Mary" is something better, a reminder that Jesus indeed had a mother, and she was nobody's fool.

(Karen Long writes for The Plain Dealer in Cleveland.)