(RNS) In a classic 1960 children's book, a baby bird toddles up to one critter after another asking, “Are you my mother?”

For some babies today, there's no simple answer — biologically or legally. 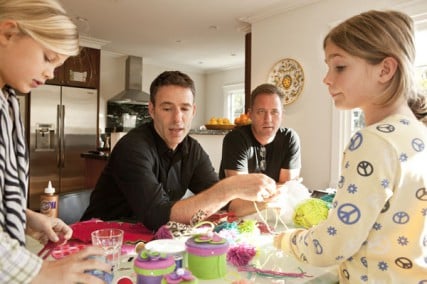 Doug Okun, 47, (L) and Eric Ethington, 46, spend a Sunday afternoon crafting Christmas presents with their twin daughters Sophia Ethington (L), 9, and Elizabeth Ethington, 9, at the dining room table of their Piedmont, CA home on Sunday, December 2, 2012. Okun and Ethington, had to work with four lawyers in two states before the California couple could ensure that their twin daughters are legally theirs. This is a potential cover or centerpiece looking at the complex legal world of gay families, artificial reproductive technologies like IVF and gestational surrogacy, and family law. Laws and court rulings on who is mom, who is dad, vary from state to state, even county to county.

Advances in artificial reproductive technologies mean a baby could have three “mothers” — the genetic mother, the birth mother and the intended parent, who may be a woman or a man.

In the complex cases of 21st-century family formation, challenges abound. Courts are struggling to sort through these complications. Examples:

— The U.S. Supreme Court will hear challenges to the federal Defense of Marriage Act and California's Proposition 8 ban next year. Rulings in those cases, likely by late June, could decide whether same-sex married couples are entitled to the same federal benefits and protections as opposite-sex married couples and whether a state can ban gay marriage.

If the U.S. Supreme Court redefines legal marriage, that will affect the legal rights of parents as well.

— The Michigan Supreme Court is considering whether children conceived through in vitro fertilization after a parent's death can receive Social Security benefits. That case involves a father who banked his sperm before undertaking chemotherapy and then died from cancer before the babies were conceived and born.

The latest technology — egg banking — could make this a legal issue for mothers as well. Freezing eggs allows a woman to stash her eggs while she's healthy and young and then, years later, have her baby. Maybe. If she dies or divorces in the interim, there's a potential legal duel over who controls the eggs.

— The Florida Supreme Court recently heard arguments in the case of a lesbian couple where one woman's eggs, fertilized with donor sperm and nurtured in vitro, were implanted in the birth mother/partner. The egg donor parent could not adopt their baby because Florida does not recognize same-sex marriages or permit same-sex adoption.

Nine years later, the birth mother took off with their daughter. The original judge in their custody battle granted custody to the birth mother. An appeals court overturned that, granting parental rights to both women. If the donor mom's rights are upheld by the state Supreme Court, the decision could redefine Florida law.

“We are making families we never dreamed of 20 years ago. Doctors laughed at me then, but if we don't create a legal and ethical framework, we will have babies born into courtrooms, not into families,” says reproductive law specialist Susan Crockin.

Crockin, who teaches at Georgetown University Law Center, tells her clients, “Everything you can do to secure your family in this new world of baby-making, you should do.”

It took four lawyers in two states to finally make Doug Okun and Eric Ethington the legal parents of their 9-year-old twins.

The Piedmont, Calif., married couple built their family using their sperm, eggs from an anonymous donor, in vitro fertilization, then embryo transfer to a gestational surrogate. “We were determined all along to avoid any legal battles about genetic parenthood,” Okun said.

Lawyer No. 1 arranged for the legal agreements with the egg donor and the surrogate, a married woman who would deliver the twins in Ohio.

Lawyer No. 2 was an estate-planning specialist who spelled out all inheritance rights and guardianship agreements — before there was any pregnancy.

Lawyer No. 3, in Ohio, worked to get the couple's names on the birth certificate so they could take their children home. The surrogate's “husband still had to renounce his rights as the legally presumed father. Then we had to have DNA testing done to establish our paternity,” Okun said.

Back in California, lawyer No. 4 arranged for a domestic partner adoption for the couple who were not yet legally wed. After their 2008 wedding — during the brief window when same-sex marriage was legal in California — they redid the adoption orders.

“The girls know how they were made, how they were born. When the mother stuff comes up, I let them answer. They matter-of-factly say, 'Oh, we have two dads,'” said Okun.

John Yeast, a doctor specializing in high-risk pregnancies and head of medical affairs for Saint Luke's Hospital in Kansas City, Mo., is just as matter-of-fact about the question of motherhood.

“I care for the actual pregnancy. I see the woman bearing the child, consenting to delivery and dealing with any complications,” he said. “State law requires her name on the birth certificate.”

Russell Moore, dean of the Southern Baptist Theological Seminary, knows about the pain of infertility. He and his wife dealt with it for years before adopting two children and then having three more “in the typical way,” he said.

Even so, Moore strongly opposes artificial reproductive technologies and same-sex couples' reliance on them to create families.

“Treatments that seek to correct the causes of infertility are praiseworthy, but once science and technology re-engineer the meaning of procreation itself, it's gone too far,” he said. “I'm concerned about the confusion and lack of well-being of a child, who from the beginning, has no father or no mother.”

The complexities of reproductive technologies, questions about who are Mom and Dad, and the multitude of laws and regulations do have a benefit, said Deborah Wald, a San Francisco family law specialist.

“All this litigation is making us think hard: What do we mean when we say parent?”

Faith
Pope Francis’ support for civil unions is a call to justice — and nothing new
News
Pope Francis voices support of civil unions for LGBTQ couples in new documentary
News
2 justices slam court’s 2015 decision in gay marriage case
Christianity
Jen Hatmaker, Christian author and former reality TV star, files for divorce
Opinion
What good is faith when your fertility treatments aren’t working?
© Copyright 2020, Religion News Service. All rights reserved. Use of and/or registration on any portion of this site constitutes acceptance of our User Agreement and Privacy Policy, Privacy Statement and Cookie Notice. The material on this site may not be reproduced, distributed, transmitted, cached or otherwise used, except with the prior written permission of Religion News Service.