STOVER, Mo. (RNS) The Rev. Travis Smith paced First Baptist Church’s sanctuary, decorated for the holidays with poinsettias and a Christmas tree. He addressed his congregation about forgiveness. 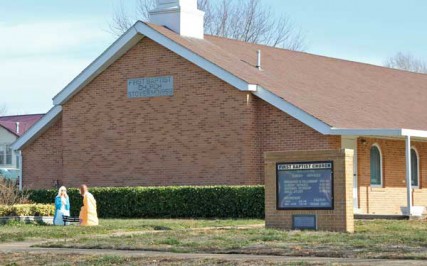 The First Baptist Church of Stover, Mo., is home to about 100 congregants led by the Rev. Travis Smith, who has been charged with statutory rape by the Moniteau County prosecutor’s office.

“For if you forgive other people when they sin against you, your heavenly Father will also forgive you,” he read from the Gospel of Matthew.

Since Smith’s arrest in October on sexual abuse and statutory rape charges, which follow similar allegations from 2010, forgiveness from his congregation has become critical to his survival as its pastor. It is this group of about 100 souls — not a bishop, nor a disciplinary committee nor national church leaders — who will decide Smith’s future in the Southern Baptist Convention.

Unlike members of many denominations — such as Catholics, Lutherans, Methodists, Episcopalian and Presbyterians — Southern Baptists don’t conform to a centralized, hierarchical structure.

Instead, authority resides at the local church level. And that’s true even amid allegations of clergy misconduct.

So while Catholic bishops have the authority to remove abusive clergy throughout their dioceses, among Southern Baptists that task falls to individual congregations.

In any denomination, Christians confronted with the shocking news that a pastor has been accused of sexual misconduct, many congregations circle the wagons, some experts say.

“When a church rallies around its pastor, there’s disbelief that someone they trust could do something like this,” said Diana Garland, dean of the school of social work at Baylor University, which was founded by Baptists. “It often feels so much safer to blame the victims for causing his downfall, rather than accept that the power of a religious leader has been abused.”

But what happens when those circling the wagons around their pastor are also those who have to make the ultimate decision about his fate — his career, his paycheck, his reputation?

Phil Marriott, a deacon at First Baptist, said no one from the congregation has put forward a motion to dismiss Smith, the first step in a longer process to remove the pastor.

“These are old charges, and if they’re true, why weren’t they brought up when they occurred?” he said. “We’ll wait for the court system to address them and let justice take its course.”

The most recent accusations against Smith, 42, by two different women, stem from alleged incidents in 1998, 1999 and 2005, when the women were minors. Those allegations led to what the Missouri Highway Patrol called a “lengthy investigation.” Prosecutors charged Smith with six felonies, including sexual abuse, second-degree statutory rape and forcible rape.

Both Smith and his lawyer declined a request to speak with a reporter.

Smith “was rough around the edges when he was younger, and that’s where all this comes from,” Marriott said. “But he has a good heart, and he’s good for our church.”

In 2010, according to news reports and law enforcement officials, Smith was arrested after a 14-year-old girl, a friend of his daughter, accused him of molesting her during a fishing trip. Another girl then came forward and said Smith began having sex with her, in 2005, when she was 15. Both girls were members of his congregation.

Last year, Smith was acquitted in one case and the other was dropped. A year later, he was arrested on the current charges, which involve different girls.

Leaders of the 16 million-member Southern Baptist Convention prefer to say that the denomination is a network of autonomous churches. The denomination’s constitution claims that each church is “independent and sovereign in its own sphere,” and that the Nashville-based Convention “does not claim and will never attempt to exercise any authority over any other Baptist body.”

According to church leaders, that means the denomination holds no power over mandating background checks for prospective clergy, ordaining pastors or removing pastors accused of sexual abuse of minors.

In a statement, Rob Phillips, a spokesman for the Missouri Baptist Convention, said the state body has “no direct authority over” First Baptist Church, but that it was “deeply grieved by the allegations,” and prays that “the church members will have the wisdom, grace and courage to act biblically in their dealings with their pastor.”

Citing verses from the New Testament, Phillips said that a church’s pastor “must be above reproach — and even above suspicion.” (RNS1-JAN27) Christa Brown runs the Baptist division of the Survivors Network of those Abused by Priests. For use with RNS-BROWN-COLUMN, transmitted Jan. 27, 2009. Religion News Service photo courtesy Christa Brown.

“There’s nothing about autonomy that precludes denominational structures,” said Christa Brown, author of “This Little Light: Beyond a Baptist Preacher Predator and His Gang,” and the founder of a website, www.stopbaptistpredators.org. “Other large congregational faith groups have regional bodies that assess a minister’s fitness to continue ministry.”

David Roozen, director of the Hartford Institute for Religion Research at Hartford Seminary, said denominations have to weigh responsibility and liability issues when it comes to clergy sexual misconduct.

“If a clergyperson holds standing in the conference or denomination, if there’s a supervisory role, there are liability issues,” Roozen said. “Usually a national office has much deeper pockets than an individual church, and if you’re going to sue, you’re going to sue everyone who has a stake in supervising the clergy.”

If the organizing body of a denomination claims no responsibility for supervising, or even ordaining clergy, it may be harder to hold it responsible when a pastor molests a child.

In 2002 and 2007, SBC delegates passed resolutions that encouraged churches confronted with clergy sexual misconduct “to rid their ranks of predatory ministers.”

The Convention provides a link to a U.S. Department of Justice sex offender database on its website, and encourages churches to perform background checks on prospective pastors, offering discounted rates to perform those checks at its headquarters.

“While we have no authority to tell any church what it should or should not do, we do have the power of influence,” said Roger Oldham, vice president for Convention communications and relations with the Southern Baptist Convention’s executive committee.

“We do have the right to identify churches that are rightly associated with the Convention, and if a church knowingly keeps employing a sexual predator, the Convention reserves right to disassociate them.”

But critics say the Convention could do more. At its 2008 national meeting, the Convention rejected a proposal that would have created a database of clergy that had admitted to, been convicted of, or had been credibly accused of sexually abusing minors. The reason: it had no authority to impel local churches to report instances of abuse.

“When a Southern Baptist church faces a crisis like this, the easiest thing to do is just let the guy go — he moves to a different state, gets a job at another church and there’s no record of his actions,” Brown said. “If a minister is not literally sitting in prison, he can find a Southern Baptist pulpit to stand in.”

The Missouri Baptist Convention’s Rob Phillips said of the Stover case: “God is gracious to forgive all sins — even grievous sins — and we should be forgiving as well if and when our leaders suffer moral failures.

“At the same time,” he continued, “we should understand the Lord holds leaders in the church to a higher standard that, when violated, disqualifies them from continuing in their leadership role.”

That theological tension between God’s invitation to forgive and his expectations of his servants has hung a burden on the congregants of First Baptist.

“This is a delicate situation for our church,” said Marriott, the church deacon. “We could jump to conclusions and dismiss him, but what if we’re wrong? We’re just a bunch of average people trying our best to live by God’s word.”

Smith’s Sunday sermon resonated with that struggle. Just as the Gospel of Matthew promises heavenly forgiveness to those who forgive, so, too, does it spell out consequences for those who refuse.

(Tim Townsend writes for The Post-Dispatch in St. Louis)