Located midway between Tulsa and Siloam Springs, Ark., the town of approximately 8,500 sits in the heart of Oklahoma’s greenbelt. Hunting and fishing are simply part of everyday life in Pryor, as it is known to locals.

Derek Melton is the assistant chief of police in Pryor, as well as senior pastor at Pryor Creek Community Church, a congregation he describes as Baptist, but not Southern Baptist.

“We follow the 1833 Baptist Confession,” Melton said. “We are an historically evangelical church.”

The confession is better known as the New Hampshire Baptist Confession of 1833, and there are very few churches around the country that subscribe to it. They answer to no denominational headquarters, no bishop, no overarching authority, except the Holy Spirit as mediated through the congregation. 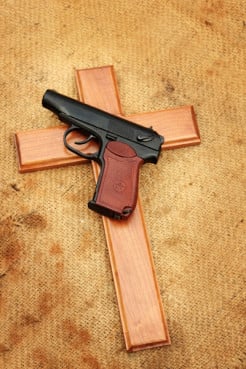 Pryor Creek Community Church is one of a few dozen churches around the country that are offering concealed carry certification classes. RNS photo courtesy iStockPhoto.

Pryor Creek Community Church is also one of a few dozen churches around the country that are offering concealed carry certification classes as a way to reach out to non-Christians and attract new members. Melton sees no conflict between being a Christian and possessing weapons.

“The disciples carried weapons,” Melton said. “Peter cut a man’s ear off. I believe if more honest citizens were armed, the safer our communities would be.”

Melton’s position is shared by pastors in churches all over the country, including congregations in North Carolina, Ohio, and Texas.

But in the wake of the massacre at Sandy Hook Elementary School in Newtown, Conn., in which a gunman killed 20 first-graders and six adults, such sentiments are coming under sharp criticism from fellow Christians.

“I understand where the people who disagree with me are coming from,” said Richard Cizik of the  New Evangelical Partnership for the Common Good. “But what these churches are proposing compromises the essential message of the gospel, that Jesus was first of all a peacemaker.”

Ryan Bennett is the senior pastor of Faith Baptist Church in Lexington, N.C. His Southern Baptist congregation has offered concealed carry training classes in the past, and he said they will offer them again.

Bennett is frank in describing the classes as outreach. “Outreach is the only reason we do it,” he said. “We’ve had two classes of 80 people each, and we have a waiting list and calls coming in all the time.”

Both churches have been the subject of local criticism, but both pastors shrug it off.

“The church can’t really do anything without being criticized,” Bennett said. “Our local paper ran letters to the editor with negative reactions. Our people knew it wasn’t about bringing pistols to church, though; it was about outreach.”

Cizik, who was a top official at the National Association of Evangelicals before leaving it and helping form his new group, said he is concerned about churches using weapons training as a means to reach non-Christians.

Cizik said he believes it’s difficult to make a hard and fast judgment about the method, though. He believes gun ownership and even concealed carry permits are matters of personal judgment.

“The church has always used a variety of methods for drawing people in,” he said. “However, I do think that there are plenty of organizations more suitable that could be doing the training.”

Duane Shank, a senior policy adviser at the Washington-based group Sojourners, said he is more concerned about weapons actually being in the church.

“A church is a place where we gather for worship and prayer in the name of the Prince of Peace,” he said. “Carrying a weapon, openly or concealed, into a place of worship is counter to that spirit.”

Both Bennett and Melton allow concealed carry in their churches, but said they don’t actively encourage it.

“I don’t consider myself a right-wing extremist,” Melton said. “I’m also sure there are plenty of people who disagree with me, but we see this as a service to our community, not a way of encouraging concealed carry in churches.”