It’s like Mother’s Day, in that to engage it with someone less than total reverence is to wander into a cultural minefield of the usual inane accusations:

So at the risk of those insults, I’d like to raise two simpler points about Christmas:   Jesus was Jewish, and Jesus was Palestinian.   Both of these aspects are missing from today’s Christmas celebration. 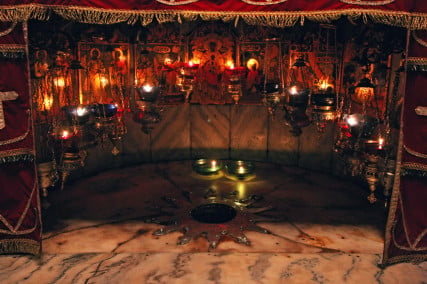 Both are obvious, yet oddly they seem to be missing from our common celebrations of Christmas.    Jesus was Jewish, but all the Jewish components of this season are banished to the Hanukkah realm.    Christmas is kept safely un-Jewish, unencumbered from anything that might suggest that Jesus was in fact, you know, well, kind of, 100% Jewish.   All the details of his birth, the topography of Christmas seems more suited “timeless”/ “eternal” than the unmistakably 1st century landscape of Jewish Palestine.  And as for the real star of Christmas, that 3rd century Roman saint St. Niklaus from today’s Turkey, well he seems like a jolly ole Dutch fella, recast through the lens of American consumerism.     [Here we go, here comes the hate mail!]

Alas, the tendency to hide Jesus’s Jewishness, his Aramaic language (a Semitic language which is far closer to today’s Arabic and Hebrew than to the Queen’s English) also smacks of lingering anti-Semitic tendencies in today Christianity. The connection between Jesus and Palestine is certainly not lost on Palestinian Christians, one of the oldest indigenous Christian communities in the world:   Latin Patriarch Fouad Twal said this Christmas would be a celebration of “the birth of Christ our lord and the birth of the state of Palestine”.

Leading the Mass at Church of Nativity, the Patriarch went on to say:
“From this holy place, I invite politicians and men of good will to work with determination for peace and reconciliation that encompasses Palestine and Israel in the midst of all the sufferings in the Middle East.”

The landscape that Jesus was born in, today’s Palestine, is almost entirely being choked out by illegal Jews-only settlements.  The Guardian reports:  “”For the first time in 2,000 years of Christianity in our homeland, the Holy Cities of Bethlehem and Jerusalem have been completely separated by Israeli settlements, racist walls and checkpoints.”   Yet as most Americans go on celebrating Christmas, we do so without any real connection to the present day reality of what is happening in Jesus’s birthplace, in today’s Palestine, and the harsh realities of occupation there.   Not only is Jesus disconnected from his Jewish roots, he is also disconnected from the atrocities in Palestine. In fact, had Mary and Joseph tried to make their way from Bethlehem to Jerusalem (and other Palestinian sites),

they would encounter many Israeli checkpoints,
Israeli settlements,
and Israeli roads.

Recently the Palestinian city of Bethlehem, which contained the Church of Nativity, was given the status of a UNESCO World Heritage Status.    The Church is believed to mark the spot where Jesus was born.

If Jesus can reconcile in his own being the twin identities of the Jew and the Palestinian, maybe there is hope for Palestine/Israel in our own age. There is hope for a state where the Jew, the Muslim, and the Christian can be reconciled in a state which would recognize equal and identical rights for all the citizens there.    A state in which all the children of Abraham would be free to worship, to live in freedom, and to live side by side.