(RNS) Christian institutions hoping to win a free campus in western Massachusetts might soon face competition from others who are willing to pay for it, according to terms of a year-end donation from the property’s billionaire owners.

NCF now plans to do what Hobby Lobby has tried in vain to do since acquiring the property in 2009: give it to a Christian institution that will honor the legacy of its founder, 19th-century evangelist D.L. Moody. 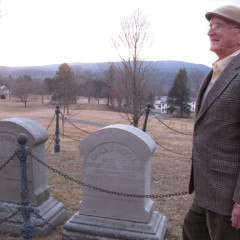 “We’re committed to maintaining the spirit with which the campus was founded,” said Aimee Minnich, president of NCF’s office in Olathe, Kansas, in an email. “So our first intent would be to find an educational institution as the final owner of the property.”

NCF received no requirements from Oklahoma’s Green family, which owns the Hobby Lobby craft stores chain, according to Hobby Lobby real estate analyst Les Miller. Although the Greens have long hoped someone would get the campus free of charge, it’s now possible NCF could sell it.

“Our intent is to find a permanent owner for the property and turn it over to them, either by sale, or by donation, or by some combination of those two,” said NCF spokesman Steve Chapman.

The gift to NCF marks the latest chapter in a saga that began just over three years ago, when Northfield Mount Hermon School consolidated onto one campus and sold its 43-building Northfield campus to Hobby Lobby for $100,000. The Green family poured $5 million into repairs and renovations with hopes of seeing a new C.S. Lewis College operating on the site by 2012.

But finding a recipient with sufficient means to run the facilities has proven difficult. First the California-based C.S. Lewis Foundation fell short of fundraising targets to launch a C.S. Lewis College on the site. Then an eight-month search process turned up a new recipient, Arizona’s for-profit Grand Canyon University, in September. But GCU pulled out when projected costs for maintenance and upgrades climbed from $150 million to more than $180 million.

“We had hoped to be able to find a qualified recipient of this property ourselves and made great efforts to do so,” Miller said in an email. “When we were unable, we decided to enlist the help of NCF.”

By giving the real estate to an NCF donor-advised fund, the Greens remain involved and may make recommendations on who ultimately receives the property. They also receive new benefits, notably a big 2012 tax write-off for the fair-market value of the Northfield campus. Hobby Lobby declined to comment on the campus’ appraised value.

The donation comes as Hobby Lobby faces whopping new federal fines — $1.3 million per day, starting Jan. 1 — for noncompliance with a federal mandate to provide birth control coverage to employees. Miller said these new financial pressures, which are the subject of a federal lawsuit, did not factor into the decision to unload the Northfield property.

Giving the property to NCF seems to help Hobby Lobby pursue its original goal for the property, observers say, while lightening burdens associated with doing so.

“It was a smart move for Hobby Lobby to give it to the foundation,” said Lisa Featherngill, managing director of planning for Abbot Downing, a Wells Fargo company that advises ultra-high-net-worth families. “They can leverage the foundation’s network of charities (to find a recipient), they can get the write-off … and they don’t have to be as involved in the transaction as they have been” up to this point.

And if NCF is unable to give or sell the campus to an educational institution, the new arrangement allows for additional options.

“Sometimes people will give an appreciated asset to a charity so that the asset can be sold within the donor-advised fund and basically avoid capital gains on the sale,” said Featherngill, who’s based in Winston-Salem, N.C. All proceeds in that case, she said, would be available for NCF to distribute to other charities.

News
Study: Biden still leads among Latino Christian voters, but Trump’s support has grown
Opinion
How a Sean Feucht worship service convinced me I am no longer an evangelical
Christianity
Jen Hatmaker, Christian author and former reality TV star, files for divorce
News
5 faith facts about Biden’s VP choice Kamala Harris — a Black Baptist with Hindu family
News
John MacArthur believes the Bible trumps COVID-19 public health orders. Legal scholars say no
© Copyright 2020, Religion News Service. All rights reserved. Use of and/or registration on any portion of this site constitutes acceptance of our User Agreement and Privacy Policy, Privacy Statement and Cookie Notice. The material on this site may not be reproduced, distributed, transmitted, cached or otherwise used, except with the prior written permission of Religion News Service.