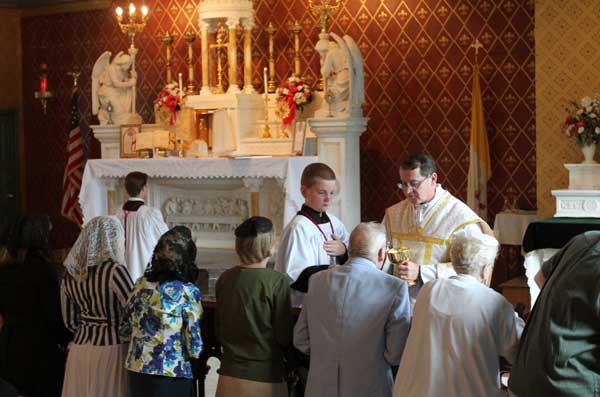 Father Kevin Robinson distributes Communion during a traditional Latin Mass at St. Michael the Archangel Chapel in Farmingville, N.Y., June 17. The chapel is administered by the Society of St. Pius X. RNS photo by Gregory A. Shemitz
January 22, 2013
Alessandro Speciale

VATICAN CITY (RNS) A senior Vatican official admitted that years of talks between the Vatican and a breakaway group of ultra-traditionalist Catholics have led to a “stalemate,” and urged a new “spiritual” approach to dialogue. 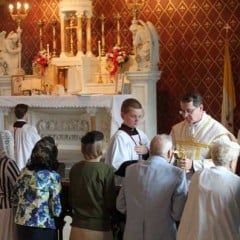 Father Kevin Robinson distributes Communion during a traditional Latin Mass at St. Michael the Archangel Chapel in Farmingville, N.Y., June 17. The chapel is administered by the Society of St. Pius X. RNS photo by Gregory A. Shemitz

Archbishop J. Augustine Di Noia, the American vice president of the Vatican's “Ecclesia Dei” Commission that oversees relations with traditionalist groups, sent a letter to all members of the Society of St. Pius X before Christmas; Vatican Radio ran an overview of the letter on Sunday (Jan. 20) and published links to its text.

The Vatican's chief spokesman, the Rev. Federico Lombardi, told the French Catholic newspaper “La Croix” that the letter was not an official document but a “personal appeal” by Di Noia.

The archbishop wrote that “while hope” for full reconciliation “remains strong,” the Vatican engagement with the SSPX is at risk of becoming a “well-meaning but unending and fruitless exchange.”

Pope Benedict XVI has actively sought reconciliation with the SSPX. The group split from the Catholic Church in disagreement with the modernizing reforms of the Second Vatican Council (1962-1965), which include acceptance of religious freedom, interfaith dialogue and ecumenism.

In 2009, Benedict lifted the excommunication of four SSPX bishops and opened doctrinal talks aimed at overcoming the theological differences over the interpretation of the council.

With talks essentially stalled, Di Noia called for a new dialogue focusing on “spiritual and theological” themes rather than on the “intractable disagreements over the authority and interpretation of Vatican Council II that now divide us.”

Di Noia admitted that the group's disagreements with the Vatican have remained “unchanged” over the decades.

“Our souls need first to be healed, to be cleansed of the bitterness and resentment that comes from 30 years of suspicion and anguish,” he wrote.

And while theological dissent has its place in the church, he said, it should never become a sort of “parallel” counter-doctrine that defines a group, and should not be aired publicly through the media.

In his letter, Di Noia also called on the group to abandon their “divisive tone or imprudent statements,” as well as their “harsh and counterproductive rhetoric.”

At a recent conference in Canada, SSPX leader Bishop Bernard Fellay blamed “Jews” and other “enemies of the church” for the stalemate in talks with the Vatican.

His remarks reignited widespread suspicion about anti-Semitism within SSPX, especially after one of the readmitted bishops, Richard Williamson, emerged as a vocal denier of the Holocaust. He was expelled by SSPX last year.