COLUMBIA, Mo. (RNS) Evangelical theologian David Lamb tackles some of the Bible’s most troubling passages in his book, “God Behaving Badly: Is the God of the Old Testament Angry, Sexist and Racist?” His answer: yes and no. 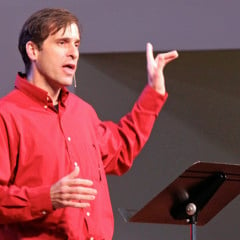 David Lamb is an Associate Professor of Old Testament at Biblical Seminary in Pennsylvania. He is the author of the 2011 book “God Behaving Badly: Is the God of the Old Testament Angry, Sexist and Racist?” He preached on Jan. 13, 2013 at Memorial Baptist Church in Columbia, Mo., to help launch a sermon series the church is doing. RNS photo by Kellie Kotraba/Columbia Faith and Values.

The book has received mixed reviews in the Christian blogosphere, but Lamb was well received when he recently spoke at a church here.  Religion News Service sat down with Lamb, an Old Testament scholar at Biblical Seminary in Hatfield, Pa., to find out how believers’ long-held views of a wrathful Old Testament God might waver with his findings.

Answers have been edited for length and clarity.

Q: You write about how God “strikes, smites, slays and slaughters.” Why is it important to understand why God is angry?

A: I think the biggest thing that God gets angry about is injustice: when poor people are being oppressed, when widows are not being cared for, when orphans are not being provided for. And those are really good things to get angry about. And let’s face it: When people are angry, it gets our attention.

Q: You write that while God “may seem sexist, He is affirming of women.” What is one example to sum it all up?

A: The very first thing we learn in the Bible is that women are divine – they are God-like. Now, men are too, but I think most men think this already. The man and the woman, when God creates them in Genesis 1, they are made in his image. And there’s nothing more positive you could say.

Q: You also write that while God “may seem racist, he is hospitable.” What do you think is key for people to know about cultural context in trying to understand this?

A: We need to go to Genesis 12, where we encounter God first talking to Abraham. He is calling the father of the nations. He wants to bless them, but he wants to bless them to be a blessing to all nations. God gets angry when foreigners are not being cared for. God wants his people to be concerned about people that are different from them.

Q: You give several examples of negative depictions of God. What are some of the biggest cultural contributions to people’s perceptions of God?

A: The classic I look at is this “Far Side” cartoon where God is at his keyboard, and there’s an innocent-looking guy walking down the street, and God’s got his finger over one key – the “smite” key.

I talk to a lot of college students, and a lot of people read, or are at least familiar with, books by Richard Dawkins and Christopher Hitchens, the so-called New Atheists. So, you’ve got these New Atheists out there writing about some of the most problematic texts in the Bible and the Old Testament, and it shapes culture.

Q: You respond in the book to the New Atheist movement and to atheist writers such as Dawkins and Hitchens. What kind of responses have you received from atheists?

A: I sent an email to Richard Dawkins and got no response, which is perhaps not surprising. I’ve had some great interactions with atheists, and they love to talk about this. Some of them feel very strongly about it, which I think has been fantastic.

(Kellie Kotraba is the editor of Columbia Faith & Values.)