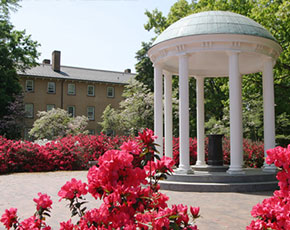 While the nation occupies itself with two Harbaugh brothers coaching in the Super Bowl,
the Manti Te’o dead-girlfriend-that-wasn’t scandal, and Beyonce’s lip-syncing, there is a much more quiet and pernicious assault on one of the foundational institutions of American civic life:  our higher education.

We may be in the process of losing the global economic lead to China, but America’s finest universities are still the global leaders.   The best and brightest students from all over the world seek to come to the United States to receive the best education the world has to offer.  And yet, there is a direct, organized, well-funded assault on American universities from right-wing Republicans and big-business interests.

Let’s take a look at one site in which this assault is taking place in a methodical fashion:  North Carolina, home to the oldest public university in America: The University of North Carolina, ranked every year as the best buy in higher education.

For decades, there has been an acrimonious relationship between the University of North Carolina, which serves as the educational heart of the state, and right-wing Republicans who resent what they perceive as the University’s liberalizing mission. 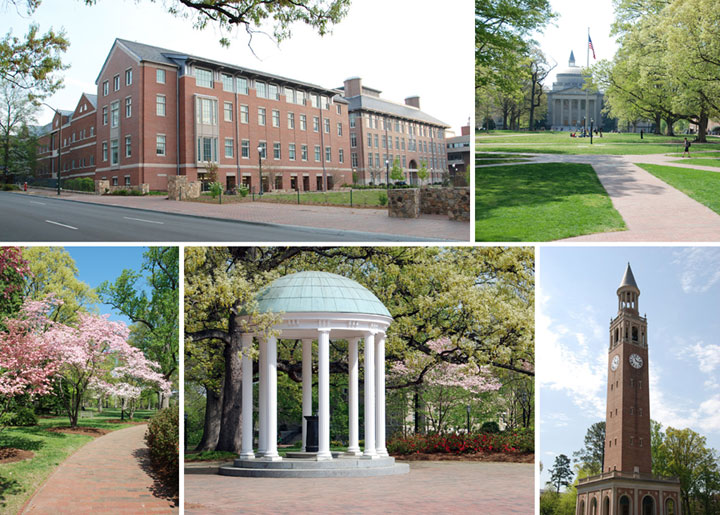 Now with the Republicans holding the governor position and controlling the state legislature, they are ready to undermine the very foundation of the university by turning it away from its current commitment to a global vision and liberal arts studies and into a place for “vocational training.”

Here is the newly elected Republican governor Pat McCrory, indicated that he would like to see North Carolina universities move away from liberal arts, and only towards vocational schools:

Riiiiight.  And just in: Trained heart surgeons have taken over performing heart surgery; trained teachers are teaching our children, concert pianists are performing in concert halls, and your trained mechanic is fixing your car.   Damn these elite experts…doing exactly what they are trained to do.

What we have here is a continuation of an anti-intellectual, pseudo-populist campaign.  In this campaign, pro-big business leaders who are in bed with the largest and wealthiest of Americans engage in political warfare against educators and media members who point out the very privileged status of the 1% by labeling those educators as “elite.”   It is pseudo-populist because the policies of the governor reinforce the special interests of the 1% at the very expense of producing a globally educated and aware citizenry that our democracy depends on.  It is precisely the vision, energy, and commitment of young people with a commitment to justice at a global level that poses a threat to the status quo favored by these big-business leaders.  Their positions of privilege necessitate large number of low-skilled workers who lack the larger perspective needed to expose and critique wealth and unearned privilege. The governor singled out courses in women’s studies as the type of course that should be targeted for de-funding in a public university:

“That’s a subsidized course, and frankly, if you want to take gender studies, that’s fine.
Go to a private school and take it, but I don’t want to subsidize.”

Apparently, UNC students do not need to learn about gender issues, sexuality, challenges faced by women all over the world, etc.    Joanna Hershfield, the chair of the Gender Studies program at UNC offered a firm rebuttal of McCrory’s assertions:

Contrary to Governor McCrory’s assertion about the lack of job-skills training in programs such as ours, because of our solid and rigorous interdisciplinary program our graduates are well-prepared to work in many fields and indeed, according to feedback from our alumni, find jobs in public health, education, law, public policy, business, social work, NGO work, and banking.

Other conservatives have extended McCrory’s defunding threat to “ethnic studies” courses as well, and repeated the right-wing mantra that these programs are mired in a mindset of “victimhood.”   Apparently they have missed the importance of historical context, struggle and resistance, anti-colonial movements, and liberation in many such departments.

McCrory himself highlighted Swahili that some UNC athletes had taken as example of courses that he would target for de-funding:

“What are we teaching these courses for if they’re not going to help get a job?”

Why would UNC students, and in this case African-Americans be interested in learning Swahili?  Could it be because it is a major African language, spoken on the Eastern coastal regions of Africa?  That African-American students would be interested in learning the language, culture, and heritage of their ancestors, as well as the region that stands to emerge as a global power in the decades to come?

This Republican assault comes in the aftermath of a massive plan to allow business interests to indicate the future growth of the university.   Recently we have seen the appointment of a 27-member “Blue-ribbon panel” which holds unprecedented powers over the university.   This unelected panel minimizes the voice of students and faculty members, instead bringing to the table big-business leaders with an eye towards changing universities into vocational schools.   The business leaders include:

These business leaders now have extraordinary powers over the university system, including:  “current and future priorities, resource planning and allocation, program planning, review and refinement of academic missions.”  That’s right, Big Business now has powers over the resources, facilities, and curriculum of the University.

The most staunchly conservative of these business leaders, Art Pope, has been trying for years to use his considerable wealth to reorient the university’s curriculum along his conservative vision.

Art Pope’s various think tanks have led the charge against studying the effects of Global Warming, and helped pay for the Republican takeover of the state in 2010.    Pope’s family has supplied 90% of the funding for conservative organizations in North Carolina.  And this is the person now with a privileged position to shape the future of NC education. 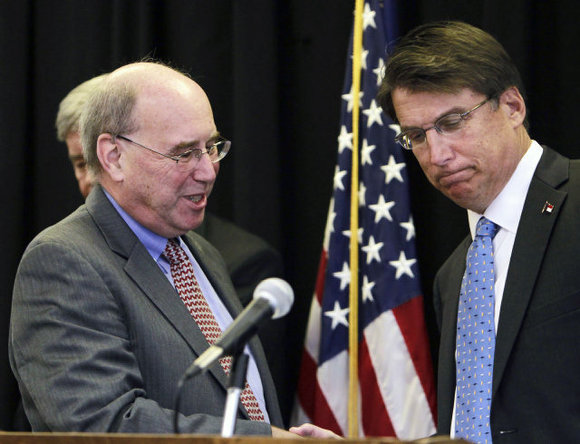 “The thinking behind it, which was very ingenious, was that state legislative races are cheap, and if you can just put a bit of money into them and flip the statehouse, then you can control the redistricting process, which in turn gives the Republican Party a great advantage in putting members of Congress in the House of Representatives. And most people don’t pay a lot of attention to what’s going on in the states. … But it’s kind of ground zero for where politics is playing out.”

The New Yorker also has an extensive on Art Pope here.  Pope was personally chosen by McCrory to be his chief budget writer.   The relationship between the two goes back a long way as part of the Republican takeover of North Carolina.

The response to McCrory has been swift from many educators.
Professor Meg Morgan of Charlotte, an award-winning educator who has been teaching for 40 years, says:

“If we want to create a society of non-thinkers, follow McCrory’s line.
If we want critical thinkers and world changers,
we need to make them look at new ideas and change their lives (and others’ lives) based on them.”

History Professor Lisa Levenstein of UNCG even took on McCrory based on his claim that undermining liberal arts would help job creation:

“McCrory’s assumption that a college liberal arts education will not prepare students for employment reflects a profound misunderstanding of the 21st century labor market. Today’s eighteen year olds can no longer predict their long-range career trajectories. Most of them will switch jobs every 4 to 6 years, assuming 5-7 positions over their lifetimes. A liberal arts education with its emphasis on highly-transferable critical thinking skills and effective writing and speaking is ideal preparation for this rapidly-changing workforce.”

The most emphatic response came from Gene Nichol, UNC law professor and former dean of the School of Law at UNC and former president of the College of William & Mary.  Professor Nichol offers a devasting critique of McCrory as jumping on the “know nothing” bandwagon:

“It is hugely disappointing to see
Governor McCrory jump on the ‘know nothing’ bandwagon to try to please Bill Bennett.
He does Glenn Beck proud.
McCrory’s not the first, nor, sadly, the last politician we’ll see demagogue about higher education.
All he really proved is that he has no clue what liberal arts education is.
It’s thrilling to think he’s out to set our curriculum.”  [Sarcasm intended]

Ultimately, the goal of McCrory and Co. is to turn universities into strictly for-profit ventures.    Thom Tillis, Speaker, North Carolina House of Representatives, a close ally of the McCrory, has brags about his “dream” to “fire all the chancellors and replace them with general managers.”

There is no question that universities are facing hard economic times, but they are not factories, they are not “businesses” in the ordinary sense of the word.    Universities, schools, and hospitals should not be for-profit ventures where the mission is defined by their ability to produce profit.   No, these are institutions that our society invests in, because we remain committed to the notion that education and health are vital to a vibrant democracy.  They are the very backbone of our civic contract, and without them our democratic experiment is bound for demise.

So what’s behind all of this assault on our educational institutions?

A goal of any liberal arts education is to train critical thinkers, with ability to assess the validity of statements, think globally, recognize the assumptions and agendas behind truth claims, and write concisely and analytically.    The real issue is not job creation, something that all of us would like to see for our students.    It comes down with to the fact that vocational training would not offer any of the skills needed to see through layers of propaganda and unmerited privilege.     That is part of why the venom of these big-business voices is saved for women’s studies, African-American studies, Global studies—fields that precisely identify and critique the price that underprivileged communities pay for rampant capitalism, unjust distribution of wealth, globalism, sexism, war, and violence.

The very same people who are speaking out now against programs in women’s studies and ethnic studies also have other commitments that leave out large blocks of humanity.    Art Pope has a commitment to a particular notion of “Western Civilization” that excludes strands such as Islam (as part of Biblical prophecy, contribution to philosophy and sciences, historical presence in Europe, etc.), as well as African-American experiences, etc.   The agenda of these conservative forces would prevent the students at our university from having an intellectually honest grappling with the full spectrum of human experience.

The students of North Carolina, the citizens of the State, and Americans deserve much better than the assault on our educational system.     The fate of our democratic experiment is measured by the health of our civic institutions and the extent of our care for the most marginalized of our society.

Our democracy is best served by sending a strong message to those behind the assault on our universities:    We are not for sale.