CHICAGO (RNS)  Religious affiliation may be on the wane in America, a recent Pew study asserts, but you wouldn’t know it walking into the storefront near the corner of West 63rd Street and South Fairfield Avenue.

Inside a former bank in a neighborhood afflicted with gang violence, failed businesses and empty lots, a team of volunteers drawn by their religious faith is working to make life better for Chicago’s poorest residents.

The free medical clinic has expanded its hours; 20-something college graduates are clamoring to get into its internship program; rap stars swing by its alcohol-free poetry slams; and the budget has increased tenfold in the past decade. 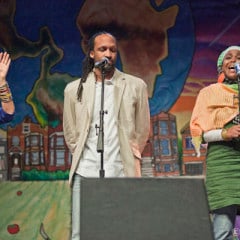 The storefront belongs to Chicago’s Inner-City Muslim Action Network (IMAN) and it is part of a wave of new Muslim institutions emerging at an unprecedented pace. More than a quarter of the nation’s 2,106 mosques were founded in the last decade, according to a recent University of Kentucky study, and new social service organizations, many of them run by 20- and 30-something American-born Muslims, are thriving as never before.

This surge in new Muslim institutions, led by a nationwide network of young activists, “is the most important story in Islam in America right now,” said Eboo Patel, founder of the college campus-based Interfaith Youth Core.

Young Muslims “are going about the process of institution building in concretely American ways,” said Kambiz GhaneaBassiri of Reed College, author of “A History of Islam in America,” adding that the 9/11 terrorist attacks shaped a generation of young Muslim activists.

Chicago may be ground zero of this trend: The city’s 15-year-old IMAN is one of several young Muslim organizations inspiring young Muslims to connect with their faith.

“Charity is an important part of our religion,” said Dr. Adiba Khan, an IMAN staff member. 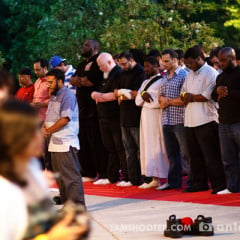 Other organizations include CAMP, the Council for the Advancement of Muslim Professionals; the Council of Islamic Organizations of Greater Chicago, the city’s umbrella Muslim federation, which organizes the nation’s largest political gathering of young Muslims at the Illinois State Capitol each spring; and the Webb Foundation, a five-year-old organization dedicated to shaping a new model of diverse, indigenous American Islam.

A new campaign known as #MyJihad, in which American Muslims describe their personal faith struggles in advertisements on buses and in transit stations got its start in Chicago before expanding to San Francisco and Washington, D.C.

“There are good things happening in many places, but Chicago seems to me to kind of have it all,” said Jane I. Smith, who recently retired as a dean at Harvard Divinity School. “It’s got all different backgrounds represented, and different ways of approaching Islam.”

Chicago’s Muslim community is among the nation’s largest and most diverse. About 400,000 Muslims live here, and the 15 new mosques built in the last decade are just one indication of wealth, growth and political connectedness. Smith sees signs of a kind of Muslim reformation here, not in any single watershed moment but in myriad significant movements that are utterly new. 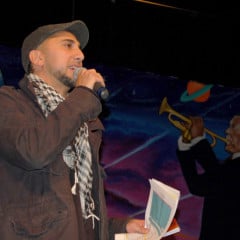 Rami Nashashibi founded IMAN in 1997 with a group of friends eager to convince Muslim suburbanites that not only could they transform Chicago’s worst neighborhoods, their faith demanded they try. RNS photo by Monique Parsons.

IMAN is run by Rami Nashashibi, a boyish-faced 40-year-old with a small black skullcap, a closely-cropped beard and a gentle charisma. Nashashibi founded IMAN in 1997 with a group of friends eager to convince Muslim suburbanites that not only could they transform Chicago’s worst neighborhoods, their faith demanded they try.

Setting down roots in a Southwest Side neighborhood that saw 70 percent of its white population flee in the 1990s, the organization he founded helped ex-convicts find jobs and housing and hosted a series of poetry slams and urban street fairs aimed at connecting Muslims to the arts and social justice work.

Nashashibi – known as Rami to nearly everyone – grew up in Chicago and has a doctorate in sociology from the University of Chicago. His dissertation focused on urban hip-hop culture, and he has the ability to connect with Hyde Park intellectuals, middle-aged suburban doctors, rabbis and neighborhood kids with just about equal ease.

Nashashibi enjoys near celebrity status among ethnically diverse cadres of young Muslims from California to London. IMAN’s budget topped $2.1 million last year, 10 times what it was a decade ago.

“I think Rami is the most impressive Muslim of my generation,” said Interfaith Youth Core founder Patel.

U.S. Rep. Keith Ellison – a Democratic congressman from Minnesota and an African-American convert to Islam – is a Rami fan.

“Quite honestly, the Muslims are very fragmented,” Ellison said. “Rami doesn’t care what color you are or what cultures you are from. He wants to work with you.”

But it may be outside Muslim circles where IMAN’s impact may be most pronounced.

Yolanda Voss sat in the clinic’s modest waiting room on a recent morning, waiting to see a doctor for a follow-up visit about her high blood pressure. A member of an evangelical Christian church, Voss said she has been impressed by the clinic’s services.

“The quality of the care is excellent,” she said, adding, “the doctor is very understanding.”