(UNDATED) Following are brief explanations of the process used in a conclave to elect a new pope. In a symbolic moment during the two-hour Mass officially installing Pope Benedict XVI, Cardinal Jorge Medina Estevez of Chile places a pallium around Benedict’s neck. The pallium, a woolen stole, is a symbol of the mission of the pastor, who like the good shepherd, must lead the lost sheep of humanity out of the desert, the new pope said. Photo by Grzegorz Galazka.

Q: Who governs the church until a new pope is elected?

A: Day-to-day operations are handled by the Vatican Curia, the central bureaucracy. All prelates who head Vatican agencies resign after the death or resignation of a pope. Provisions are made to oversee the papal household, the spiritual needs of Romans and to grant absolutions.

Q: What does the word “conclave” mean?

A: The word comes from the Latin, “with a key,” referring to the tradition of locking the doors until cardinals elect a winner.

Q: Who is eligible to be elected pope?

A: Technically, any baptized male Catholic is eligible, provided he is not married and in good standing with the church. Since 1378, however, new popes have come from within the College of Cardinals.

Q: Who sets the rules for how a pope is elected?

A: A 1996 document by Pope John Paul II, “Universi Dominici Gregis,” lays out the framework for the conclave. Pope Benedict XVI amended it in 2007, abolishing a norm that allowed a pope to be elected with just an absolute majority instead of a two-thirds majority in case of an impasse. Other details and traditions have evolved over time.

Q: What language is used in a conclave?

A: Traditionally, Latin has been the lingua franca of the church. However, with a global church, Latin has fallen away. While some details already call for Latin — “extra omnes!” (all out!) is used to shoo everyone out of the Sistine Chapel — others will likely be replaced by Italian, Spanish and English or any of those languages.

Q: Does a conclave ever convene for any other reason? 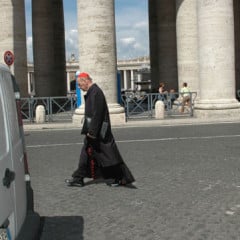 An unidentified cardinal walking toward the Casa Santa Marta, the hotel where the cardinals live during the Conclave. Many cardinals cruise the streets of Rome by chauffeured car; but some prefer the old-fashioned method of transportation. Photo by Rene Shaw.er reason?

A: No. Any pope can call together cardinals for advice or any other purpose, but a conclave is only used to elect a pope.

Q: Who may participate in a conclave?

A: Outside of cooks or housekeepers, no. Only cardinals — who by definition are male priests — may participate.

Q: Who are the Americans who will participate?

A: There are 11 American cardinals who are eligible to participate. Five of the cardinals head archdioceses — New York, Washington, Chicago, Boston, Houston; three hold positions in Rome and three are retired. Eight other American cardinals are too old to vote.

Q: When does the conclave begin?

A: The 1996 guidelines call for the conclave to begin between 15 and 20 days after the pope’s death, or when the papal throne is decreed as vacant. Benedict has said he will resign on Feb. 28. 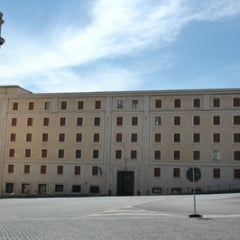 To ensure electors in the papal conclave are sequestered from any outside influence, all voting cardinals will be housed in the Casa Santa Marta (St. Martha’s House), a plain but capable $20 million hotel built just for this purpose by Pope John Paul II in 1996. The conclave’s task is to choose the next pope. Photo by Rene Shaw.

Q: Is the conclave open to the public?

A: Absolutely not. The voting is conducted behind closed doors under the tightest security. The conclave is closed to allow the cardinals to cast their votes without outside influence or pressure. Anyone associated with the conclave must take a vow of secrecy.

Q: Where is the conclave held?

A: Voting is held inside the Sistine Chapel, under Michelangelo’s famous ceiling. Cardinals will stay in the Casa Santa Marta, a $20 million hotel-style residence inside the Vatican walls built by Pope John Paul II. Cardinals may not leave the Vatican grounds until a conclave concludes.

Q: What are the factors likely to influence the voting?

A: Officially, the church says only the Holy Spirit will influence the results. But church watchers say a new pope will win based on several criteria: age, nationality, life experience, personality, and positions on major issues facing the church.

Q: Who are the front-runners?

A: It’s difficult to tell. The turmoil in the Vatican Curia under Benedict might lead cardinals to look for a younger pope who has shown administrative capacity as well as theological acumen; they might also look for someone with an easier touch with the masses and the media, and who is able to speak for the majority of Catholics who are based in Latin America and Africa. 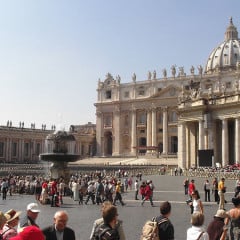 St. Peter’s Square – Rome. During the process to elect a new pope, cardinals will stay in the Casa Santa Marta, a $20 million hotel-style residence inside the Vatican walls built by Pope John Paul II. Cardinals may not leave the Vatican grounds until a conclave concludes. RNS photo courtesy Wikimedia Commons (http://bit.ly/XqMJiW) / Public Domain.

But a large part of the voting cardinals have a long experience at the Vatican and might look for one of their own to lead the church. As in the case of Benedict’s election, traditional liberal/conservative labels are not useful. The old maxim usually applies: “He who goes in papabile (a candidate for pope) comes out as a cardinal.”

Q: Could an American be elected pope?

A: Technically, yes, and for probably the first time in history, an American — New York Cardinal Timothy Dolan — is considered a strong candidate. But it remains to be seen if cardinals will want to overcome an old taboo and pick the world’s most visible religious leader from the world’s lone superpower.

Q: Are overt campaigning or backroom deals allowed?

A: After the death or resignation of a pope, discussions prior to the conclave are expected, but campaigning is discouraged. Paper ballots are cast in silence, leaving discussions and arguments to be held outside the Sistine Chapel. Alliances are natural, but cardinals are forbidden to buy votes or make deals.

Q: When does the voting occur?

Q: How long does the voting continue?

A: Ballots are cast until a winner receives the necessary two-thirds majority. After three days of unsuccessful balloting, cardinals take a break and resume after a short spiritual talk. Voting then continues for another seven votes, followed by another break, and an additional round of seven votes. After about 30 ballots or about 12 days, cardinals will have to vote between the two candidates who have received the most votes in the last ballot.

Q: Who counts the ballots?

A: The conclave features elaborate voting and vote-counting procedures to prevent fraud. Cardinals are selected by lot to count and double-count the ballots and collect votes from sick cardinals.

Q: How does a cardinal become pope once he is elected?

A: Simply by answering “I accept” to the question, “Do you accept your canonical election as supreme pontiff?” (In the unlikely event that the new pope is not already a bishop, he must first be consecrated a bishop by the cardinals.)

Q: Can a pope refuse his election?

A: Technically, yes, although it has been centuries since any cardinal has done so. In 1271, St. Philip Benizi fled the conclave and hid until another man was elected. St. Charles Borromeo declined election in the 16th  century, and Cardinal Robert Bellarmine did the same in the 17th century.

Q: How does a pope choose his papal name? 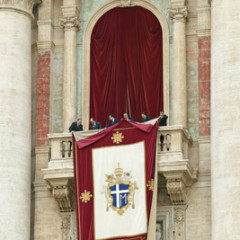 Workers hang out a papal banner from the balcony on St. Peter’s Basilica in the Vatican before new Pope Benedict XVI waved to the crowd. Photo by Grzegorz Galazka.

A: Simply put, he takes whatever name he chooses. There is no law that mandates a new name, but the practice has been standard for about the last 1,000 years. Some honor a favorite saint or a beloved pope. Others honor their predecessors — John Paul II followed John Paul I, who succeeded Paul VI and John XXIII, while Benedict drew on a long church tradition: the last pope to choose this name, Benedict XV, reigned from 1914 to 1922. The only name that is sacrosanct is Peter, the first pope.

Q: What does the white smoke mean?

A: Ballots are burned in a special stove, whose chimney is visible to onlookers in St. Peter’s Square. Black smoke means there is no winner; white smoke means a new pope has been elected. The only record of the voting is a document prepared at the end of the election. It is given to the new pope and placed in a sealed envelope in the archives, only to be opened with papal permission.

Q: How does the world know a new pope is elected?

A: After white smoke swirls up for the chimney, a senior cardinal will announce from the balcony of St. Peter’s Basilica, “Annuntio vobis gaudium magnum. Habemus papam” — “I announce to you news of great joy. We have a pope.”

Q: What is the new pope’s first official act?

A: By tradition, after changing into his white papal vestments, the pope delivers his first “urbi et orbi” blessing to the city of Rome and the world.

Q: What are the official ceremonies following the election?

A: About a week after his election, the new pope will celebrate his installation Mass inside St. Peter’s. The new pope will also take possession of his cathedral, St. John Lateran, as bishop of Rome.