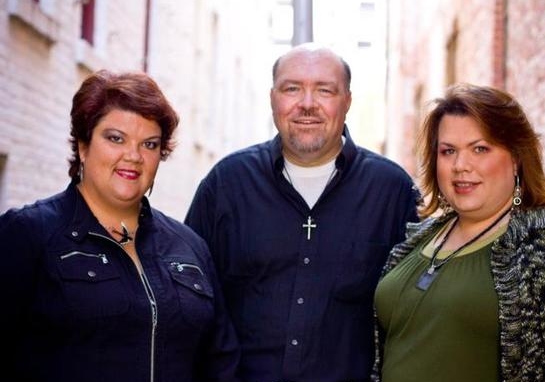 WILMINGTON, N.C. (RNS)  The bios of the musicians who make up the band Micah’s Rule read like many Christian artists.

Grew up singing in the church. Preacher’s son. Then became a preacher. In many bands. Degrees in music and ministry. Recorded some albums. Toured with Christian music legends. Even struggled with their faith along the way.

What their bios don’t mention outright might make them one of the rarest recent talents to record in Nashville, Tenn. The three musicians of Micah’s Rule are an openly gay man, transgender woman and a lesbian.

But Greg McCaw, Chasity Scott and Mary Anne Hewett don’t want their sexuality to define them. They want their music to be the centerpiece of their life and ministry.

“There are many people who are gay in the music industry in Nashville, but they’re so far in the closet,” McCaw said.

“It’s just our back story, plain and simple, but we’re not using that as a marketing tool for our music, positively or negatively. We want to be a musical group like any other, but we realize our back story will get out.”

After returning from their recording session in Nashville with famous producer Mark Moseley, Micah’s Rule is ready for their turn in the spotlight, having released their first CD with a party in Wilmington, N.C., their home base.

Though the trio performs a lot of gospel music together in their parish, Wilmington’s St. Jude Metropolitan Community Church, their CD is a mix of Southern gospel, classic country, blues and a medley of 1960s peace songs — all with a Christian message.

Their band name refers to the passage their church adopted — Micah 6:8 — “He has shown you, O mortal, what is good. And what does the Lord require of you? To act justly and to love mercy and to walk humbly with your God.”

Their songs reflect their life struggles as well as their praise of God.

In “Walk the Road,” they sing: “Sometimes you just have to be the one to set your own self free … what matters isn’t what you’re told. But how you walk the road.”

Scott wrote the slide guitar ballad “Can You Hear Me?” as a prayer for her father: “I want him to see, Jesus in me, like I see Jesus in him. Can you hear me? Father, can you hear me?”

There are less serious songs on the CD like the medley of John Lennon’s “Imagine,” The O’Jays “Love Train” and Bob Marley’s “One Love.” There’s also a reprisal of “Thank You For Being a Friend,” the theme song to the TV show “The Golden Girls.”

Even before its release, the CD was already in demand at St. Jude’s. Church member Marcia Morgan believes their music has attracted more people to the church. Another St. Jude’s member Sherry Tucker Henderson bought copies for everyone in her family for Christmas.

“I listen to it day and night,” she said as she was driving to Florida on a trip. Henderson packed 35 more Micah’s Rule CDs to take to churches there. “It’s a message I think everyone needs to hear.”

And all of this has happened in just one year. The three sang together for the first time at Hewett’s brother’s funeral, and knew they’d discovered something special, the way their voices blended.

In January 2012, they began rehearsing and writing together. Scott has a doctorate in music education from Harvard, Hewett has been singing all of her life, and McCaw was the bass singer for many popular Christian musicians including Sandi Patty, Bill and Gloria Gaither and the Gatlin Brothers for 22 years. He also served as a Church of God pastor for more than 25 years in five states.

“When we got together, we got to talking about our own philosophy on religion to see if we melded that way as well,” Scott said. “The way Mary Anne and I write, it’s more of a storytelling with our faith being the force that drives us forward.”

“Well, I thought they sounded really good live, they’d probably sound just as good in the studio. They have a really good blend,” he said from his Sound Control Studio, where he’s recorded albums for Dolly Parton, George Jones, Vince Gill, Patty Loveless and Willie Nelson. “If they focus on what they do and who they are, I think they’ll be really successful.”

McCaw met Moseley through some of his previous Nashville contacts.

“There’s a lot of country music and gospel people who won’t accept them for who they are,” Moseley said. “That’s never been an issue for me because I record based on talent, not on what you believe.”

Micah’s Rule wants their music to speak to everyone, that “in life, it’s how you walk your road, not listening to people who say you’re not worthy of God’s love,” Hewett said.

“And we’ve all had that experience,” McCaw added.