VATICAN CITY (RNS) As of 8 p.m. Thursday, Pope Benedict XVI is no longer be pope and the Vatican will go into “sede vacante” mode — a Latin expression that means that the seat of St. Peter is vacant. 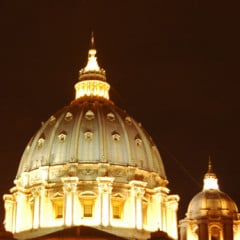 So who’s in charge until a new pope is chosen? The “interregnum” between two popes is governed by ancient rituals and by institutions half forgotten even within the Vatican.

But it is also the only time that the Catholic Church comes close to vaguely resembling a democracy, with the College of Cardinals acting somewhat like a Parliament with limited powers as it prepares to choose the new pontiff in a closed-doors conclave.

According to Universi Dominici Gregis — a 1996 document by John Paul II that regulates what happens between the death or resignation of a pope and the election of his successor — during the “sede vacante” period all the heads of Vatican departments “cease to exercise their office,” with few exceptions.

The only officials to remain in their posts are the vicar of Rome, who continues to provide for the pastoral needs of Romans, and the major penitentiary, the official who grants absolutions and dispensations.

This means that as of 8:01 p.m., the Vatican’s secretary of state, Cardinal Tarcisio Bertone, will also lose the post that’s the rough equivalent of a prime minister.

But Bertone holds another post that plays a key role during the the interregnum: camerlengo of the Holy Roman Church.

The camerlengo, together with the Apostolic Chamber (an office dating back to the Middle Ages that once acted as the papacy’s treasury), runs the Vatican state and is in charge of the church’s property and money in the absence of the pope.

In preparation for his resignation, Benedict on Feb. 13 appointed Archbishop Giuseppe Sciacca, the deputy governor of the Vatican City State, as auditor general of the Apostolic Chamber, a position that had been vacant since 2010.

Sciacca will act as a sort of legal adviser to the camerlengo and to the vice camerlengo, retired Italian Archbishop Pier Luigi Celata. 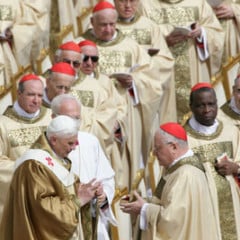 During the period between popes, the dean of the College of Cardinals (currently Cardinal Angelo Sodano, a former secretary of state under Pope John Paul II) presides at the daily meetings, or congregations, of the cardinals that effectively run the church on an interim basis.

But because Sodano is over 80, and so won’t have the right to vote in the conclave, when only cardinal electors meet his place will be taken by the most senior member of the College of Cardinals who’s still eligible to vote, Giovanni Battista Re, a former head of the Vatican’s department for bishops.

Bertone, the camerlengo, presides at smaller meetings of a select group of cardinals, chosen by lot every three days, that deal with lesser issues.

The power of the assembly of cardinals is limited. According to John Paul’s 1996 instructions, it “has no power or jurisdiction in matters which pertain to the Supreme Pontiff during his lifetime or in the exercise of his office.”

Its sole task, in fact, is to “dispatch of ordinary business and of matters which cannot be postponed” and to prepare the conclave that will elect the next pope.

In the daily congregations, which must be attended by all cardinals of voting age (under 80) who have already arrived in Rome, cardinals decide by majority vote.

Once the conclave elects the new pope and he accepts, governance of the Vatican returns to the pope’s hands.