(RNS) I got home from a church event on Sunday evening, in time to watch the season three finale of “Downton Abbey” on PBS, but I stuck to my guns about catching up on previous episodes first. 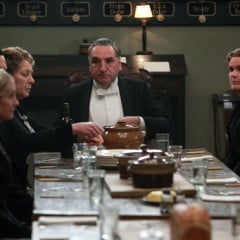 But on Monday morning, The New York Times had two articles about the finale and I couldn't stop myself from reading them.

So now I know that two key characters get killed off — because the actors playing them wanted to move on from the show. Does that mean watching the older season three episodes is pointless? Not at all. As any Christian can tell you, knowing how the story ends doesn't take away its meaning or mystery. If anything, you become even more alert to character development.

Killing off characters can work wonders for a television series, but it rarely works for the actors who overestimated what they uniquely brought to the program.

Ask any executive, pastor or educator about moving on and then bombing in the next job: their success wasn't about them in the first place. It was circumstance, luck or an “alignment of the planets,” if you will, that existed only for an instant.

Maybe this reality explains why Christianity has been such a flawed enterprise. Think about it. Virtually nothing of what Jesus intended has come to pass. His followers aren't one, they aren't even nice. Humankind has neither learned to love God or neighbor, to make peace, or to proclaim the good news of salvation in any way deeper than institutional arrogance. Nor have we learned to be bold in justice, magnanimous in healing, generous with wealth, or welcoming of outcasts.

Every now and then, people who know the end of Jesus' story, go back and discover how the end came about. They read what Jesus actually did and what he actually said. They see themselves, not as the keepers of a proud institution, but as pilgrims and disciples walking with the Jesus who was.

That way is both terrifying and exhilarating, both humbling and joyful. The journey takes one profoundly out of step, often into the wilderness that Jesus experienced, away from the known and into villages where the needs of this world come pressing around one's door.

Pilgrims and disciples look especially at what Jesus' debut season was intended to produce as the story unfolded. They don't look for the proud and prickly institutions our ancestors created and we perpetuate, not the more than 40,000 denominations that joust for attention and funds, each one convinced of its superiority. But they look for a transformed humanity that's capable of resisting evil, speaking truth to power, treasuring humankind in all its forms and making daily life a better reflection of God's life.

Those discoveries or awakenings can become amazing moments. They can change the world. But they always require that there be a new season, not a continuous replication of earlier seasons.

It's time for a new script, written and directed by an author who knows more and loves more than we do.