The Levitt family of Silver Spring, Md., dressed in Harry Potter costumes for Purim in 2011; the family does not celebrate Halloween, preferring instead to celebrate the Jewish holiday of Purim. Photo courtesy of the Levitt family.
February 19, 2013
Lauren Markoe

WASHINGTON (RNS) Debby Levitt's four children are dressing up big time for Purim, one of the more raucous of Jewish holidays, which begins on Saturday (Feb. 23) this year. 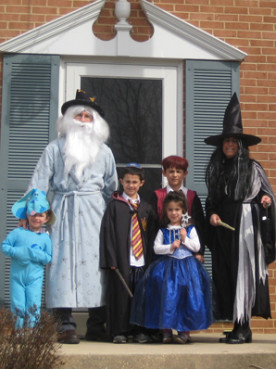 The Levitt family of Silver Spring, Md., dressed in Harry Potter costumes for Purim in 2011; the family does not celebrate Halloween, preferring instead to celebrate the Jewish holiday of Purim. Photo courtesy of the Levitt family.

Commemorating Queen Esther's brave and successful efforts to save the Jews of Persia from extermination, Purim calls on Jews to rejoice in costume and to give goodies to neighbors and friends.

Girls often dress up as the beautiful queen, and boys as her valiant cousin Mordecai, who refused to bow down to the evil Haman, who aimed to extinguish all vestiges of Judaism from the kingdom.

The goody baskets -- mishloach manot, in Hebrew, or the "sending of portions"  -- are meant to contradict Haman, who asserts in the biblical book of Esther that Jews were a people riven by strife.

They and many other Jewish families abstain from trick-or-treating on Oct. 31, which traces its roots to pagan festivals and the Christian celebration of All Hallows' Eve. For them, Halloween is just another day.

Among Orthodox families, their stance is common, while less observant Jews typically embrace Halloween. But each year, Purim raises the question, even for some rabbis: Should Jews dress up and give out treats only on this holiday, and leave Halloween alone?

It's one of those "how much should we assimilate" issues, made all the more tricky since it involves children, princess dresses and candy.

"It's not in our tradition and it's not an option for our family," said Levitt, who lives just outside Washington, D.C., in Silver Spring, Md. "I want them to celebrate holidays which are part of our tradition."

Dressing up and cavorting on Purim is meaningful and grounded in Judaism, she continued. Purim marks a time when the Jews' fate turned from death to life. "It's about everything turned upside down. ... We're celebrating that triumph of justice over injustice."

And though Levitt doesn't make the connection between Halloween and Purim, she said her children -- ranging in age from 4 to 10 -- do. They've matter-of-factly noted on Halloween that their dress-up day comes about four months later, on Purim.

But Katy Gingles, another Jewish mother who lives a few miles from Levitt in Bethesda, Md., has enjoyed watching her 5-year-old twins revel in both Purim and Halloween.

She understands the pagan and Christian roots of Halloween, and knows that historically, Halloween has been a time when Gentiles once tormented Jews. And she has explained to her daughters why some of their Jewish friends don't dress up or trick-or-treat on Halloween.

Yet "we live in a secular society and Halloween, whatever its origins, has become very secularized," she said.

And while Levitt's children, who attend a Jewish day school, don't see much Halloween up close, the Gingles twins go to a public school where Halloween is a big deal with a schoolwide costume parade.

"It's a pagan and Christian holiday but it's one of those weird holidays that has virtually lost its Christian meaning," he said.  "It's hard for me to object as a rabbi."

One thing he does object to, however: Jewish families who skip Purim, and go all out on Halloween.

But to Rabbi Joshua Maroof, focusing on the Jewish meaning of Purim also means forgoing Halloween. He's said as much to his synagogue, Magen David Sephardic Congregation in Rockville, Md., though he knows some families ignore his advice.

Yes, trick-or-treaters dress up on Halloween and so do Jews on Purim, he said. And yes, both holidays involve giving out treats. But only on the surface are the holidays alike, Maroof said.

"The real lesson of Purim is that appearances are not everything and that God oftentimes operates behind the scenes and we can't always directly perceive the intervention in our lives," he said.

Maroof, who is part of the Orthodox tradition, reports little pushback from congregants or from his five children. But on Halloween, like Debby Levitt, Maroof lets his kids hand out candy at the door.

"Just because you're not participating yourself doesn't mean you need to be a bad neighbor," he said.

[Editor's note: an earlier version of this story appeared in 2012]

September 21, 2020
Related Posts
By Jeffrey Salkin
The most Jewish thing that Ruth Bader Ginsburg ever did
By Yonat Shimron
Ruth Bader Ginsburg, who died Friday, was shaped by her minority faith
By Jeffrey Salkin
COVID has led us all into sin
By Alejandra Molina
600 faith leaders sign letter urging California governor to stop transfer of incarcerated people to ICE
By Adelle M. Banks
Brenda Salter McNeil on racial justice: ‘Silence is violence’