(RNS) When aging religious leaders reach the top echelons of temporal and spiritual power, their followers have a certain expectation: Till death us do part.

But Pope Benedict XVI’s surprise resignation has shifted that calculus, prompting introspection about traditional understandings of religions’ senior management and when, if and how to let them go. While many rank-and-file pastors and priests retire in their 60s, their superiors maintain their posts far longer: Benedict is resigning at 85, the same age as Mormon President Thomas Monson. The Dalai Lama is 77 and Ecumenical Patriarch Bartholomew, the world leader of Eastern Orthodoxy, is the youngest of the lot at 72.

Some religious leaders prefer to step aside before they die in the job. Former Archbishop of Canterbury Rowan Williams retired last year at the relatively young age of 62. Others are term-limited and ease themselves into retirement and fade from the public scene.

Evangelist Billy Graham, now 94, turned the reins of his evangelistic association over to his son Franklin in 2000 but continues to comment on the political scene.

The Rev. Robert H. Schuller, 86, resigned as the Crystal Cathedral empire he built crumbled and declared bankruptcy amid a nasty family battle. He resurfaced in January at his daughter’s Hope Center of Christ congregation in Orange County, Calif., and “is looking forward to joining us once a month,” Pastor Sheila Schuller Coleman said. 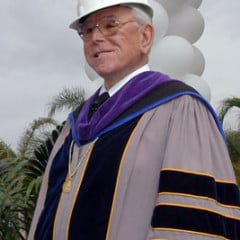 Members of Monson’s Church of Jesus Christ of Latter-day Saints consider him a divinely chosen “prophet, seer and revelator” who is part of the church’s First Presidency that includes two top counselors that can assist when he is healthy or ill.

“They function as a presidency, unlike the pope, who I think pretty much functions and exists in a kind of singularity,” said Terryl L. Givens, author of “The Book of Mormon: A Very Short Introduction.”

“It’s kind of a fail-safe: It ensures that the business can continue to be conducted in an effective manner even if one of the three, including the president, suffers growing incapacity.”

Benedict’s pending retirement has drawn admiration from some religious leaders who hope non-Catholic officials may follow his lead.

“This is an historic moment that alters expectations for sacrificial leadership in all communions,” said National Council of Churches President Kathryn Lohre, in a statement after the pope’s announcement. “He is bravely facing up to the realities we all confront: the fragility of the human body and the inevitability of the time when we can no longer shoulder the burdens placed upon us.”

The pontiff said he was resigning “for the good of the church’’ — and some large church pastors are taking comparable steps, said megachurch expert Scott Thumma.

“I think that’s what megachurch pastors have come to say, too: ‘This is bigger than me and if I don’t have a responsible plan to move the congregation beyond me, then I’m not doing my task of ministering to this community,'” said Thumma, a sociologist at the Hartford Institute for Religion Research.

Age and health have long determined when religious leaders hang up their zuchettos, yarmulkes and kufis, but there’s another looming factor.

“Ministers have big egos, so they don’t like to be as candid as the pope has in assessing his weaknesses,” said E. Glenn Hinson, professor emeritus of spirituality and church history at Baptist Theological Seminary at Richmond. “Now, though, he has set a persuasive example in putting the concerns of the church above the traditional way of holding office until death.”

While average Americans are intrigued by discussions of white smoke and possible popes, in places like Bartholomew’s home base of Turkey or the Dalai Lama’s Tibet, successions are shaped by “a very, very different kind of situation,” notes Harvard University scholar Elizabeth Prodromou.

“The kinds of decisions that get made for the good of the church and thinking about succession in the church have to take into account the fact that those churches exist under siege and at risk,” said Prodromou, a Greek Orthodox Christian and former vice chair of the U.S. Commission on International Religious Freedom. Syracuse University requested the special seating for the Dalai Lama, spiritual leader of Tibet, who spoke on campus Monday (Oct. 8), and it’s obvious he enjoyed the spacious accommodations. As he should. The red leather and wood Stickley chair was made especially for him — three times. Credit: RNS photo courtesy The Post-Standard, Syracuse, N.Y.

The Dalai Lama, long in conflict with China and leading from exile in India, has sought to address the tangled web of succession and religious oppression in recent years. In a “unique historical moment” in 2011, the Buddhist leader handed over his political leadership to a secular prime minister, said Robert Barnett, director of the Modern Tibet Studies Program at Columbia University.

“He doesn’t want the dispute over succession of the Dalai Lama, which is still to be worked out, to damage the survival capacity of his government,” said Barnett. “He instructed the government to set itself up as a secular body.”

The Dalai Lama also issued a statement in 2011 about his eventual reincarnation, suggesting a possible change from tradition. Usually other lamas identify a new leader after the Dalai Lama’s death through factors such as signs, dreams and visions. But the Dalai Lama mentioned the possible appointment of a successor before he dies.

He plans, when he is “about 90,” to consult with top lamas to determine a successor or a succession process.

Barnett wonders if the Dalai Lama’s considerations might be a teachable moment for the Catholic Church — where, like the Dalai Lama, the pope is both spiritual leader and political head (of the Vatican City State).

“He still remains by far the most important person because of his charismatic role,” Barnett said. “It would be very, very interesting if the pope would do something like that.”