(RNS) One of the first acts of the new pope will be to chose a new name. The choice is entirely up to him, but it typically carries symbolic (even political) weight. 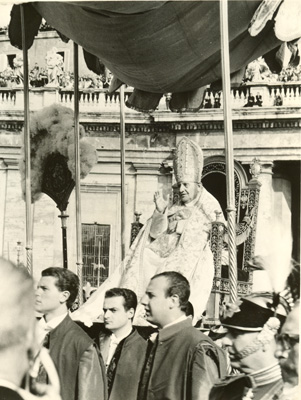 (RNS) Pope John XXIII is carried on a papal throne to the opening session of the Second Vatican Council in 1962. Religion News Service file photo.

Cardinal Joseph Ratzinger became Benedict XVI, in part to honor Benedict XV who sought to broker peace during World War I, and St. Benedict, a leading light of European Christianity. Cardinal Karol Wojtyla became John Paul II in 1978 to honor his short-lived predecessor John Paul I, who had picked his name from his two immediate predecessors, John XXIII and Paul VI.

The only name that tradition holds is off-limits is Peter, in deference to the first pope, St. Peter.

Here’s a list of the most popular papal names to help him get started. If the new pope decides to go with the most popular and become John XXIV, watch out. John XXIII (1958-1963) revolutionized the Catholic Church with the Second Vatican Council, and things have never been the same since.

The 10 Most Unique Papal Names