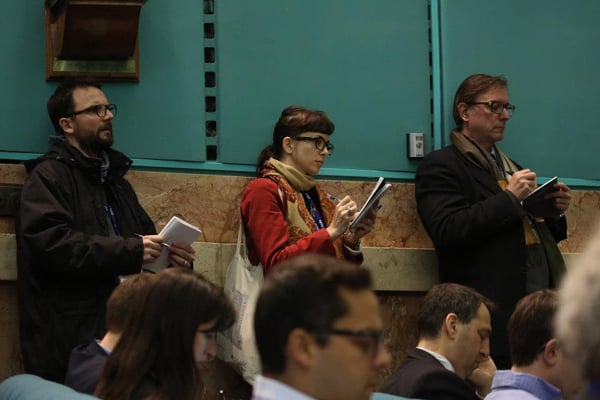 Reporters listen as Cardinal Seán O’Malley and Cardinal Daniel DiNardo of Houston spoke to the media on Tuesday, March 5, at the Pontifical North American College. Photo courtesy George Martell / The Pilot of Boston.

VATICAN CITY (RNS) Tensions among the Roman Catholic cardinals meeting here to choose a new pope appeared to escalate on Wednesday (March 6) as the American prelates in Rome canceled their daily press briefing under pressure from colleagues who are frustrated over news coverage of their secret talks.

The cardinals also announced that they still had not been able to agree on a start date for the conclave, in which 115 electors will cast their ballots for a successor to Pope Benedict XVI.

The effort to control the flow of information from the daily pre-conclave “General Congregation” meetings marked a sharp reversal from the unprecedented openness that had characterized this first papal conclave of the digital age.

While all the cardinals swear an oath not to reveal details of their conversations, the Vatican press office has been giving a daily briefing each afternoon on the discussions, which are aimed at identifying the main challenges facing the church and helping the cardinals decide who among them might be best suited to confront those problems.

An hour after the Vatican briefing, at least two American cardinals would follow with a press conference of their own at the North American College, the elite U.S. seminary in Rome that overlooks St. Peter’s Basilica.

The American briefings were virtually the only time reporters could hear directly from the cardinals themselves. Because of the U.S. cardinals’ straightforward style, their press conference was drawing growing interest from the more than 5,000 journalists who have flocked to Rome for the conclave.

That clearly ruffled the feathers of some other cardinals, notably the Italians who still feel they have certain territorial privileges when it comes to events in Rome. On Wednesday, an hour before the U.S. briefing, reporters received an email saying it was canceled and would not be held again. 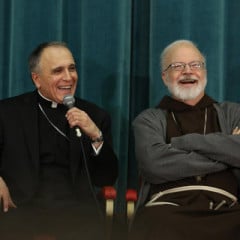 (Left) Daniel N. DiNardo, archbishop of Galveston-Houston, Texas and (right) Sean P. O’Malley, archbishop of Boston. An hour after the Vatican briefing, at least two American cardinals would follow with a press conference of their own at the North American College, the elite U.S. seminary in Rome that overlooks St. Peter’s Basilica. Photo courtesy George Martell / The Pilot of Boston.

The U.S. cardinals “got slapped down,” the Rev. Thomas Reese, a Vatican expert and conclave analyst for the National Catholic Reporter. “They are a convenient scapegoat.”

“Italians are leaking to their favorite journalists, while Americans want to play fair, they want to give information to everyone at the same time. And they are punished for that.”

A spokesman for the U.S. Conference of Catholic Bishops, Don Clemmer, defended the cardinals’ openness, saying that they “believe in sharing non-confidential information with the media, and they would never violate that confidentiality.”

But, Clemmer added, the U.S. cardinals backed the decision to scrap their briefings in light of news reports that were relaying other confidential details from the discussions.

“A number of cardinals, including the U.S. cardinals, didn’t like the breach of confidence, and they felt they could not speak freely in the General Congregations if everything was being published in the newspapers,” he said.

The about-face was especially surprising because the Americans had been praised in the Italian media and elsewhere for their open approach. On Tuesday, Giovanni Maria Vian, the editor of the Vatican’s semi-official newspaper L’Osservatore Romano, said church officials had “much more confidence” in the media than during the last conclave, in 2005, when the cardinals were told from the start not to talk to the press.

But ongoing leaks in the Italian media, combined with the high visibility of the U.S. cardinals, appeared to irk other cardinals who feared that this sacred process of discernment was beginning to look like a political campaign – and one that was being dominated by the Americans.

“We are not dealing with a convention or a synod,” the Rev. Federico Lombardi, the Vatican’s chief spokesman, told journalists Wednesday. The General Congregations and the conclave are “a journey” that benefits from a “tradition of privacy” that allows the cardinals to speak and act freely, he said.

STILL NO START DATE FOR THE CONCLAVE

Adding to the tensions among the cardinals is the question of when the conclave might start. The cardinals appear to be at odds over that issue, as well, with some – including many of the Americans – saying they want to take their time with the preliminary discussions, while others may want to speed the process up to prevent other camps from organizing behind one candidate or another.

The last of the 115 cardinal electors (only cardinals under 80 can vote in a conclave) was scheduled to arrive in Rome on Thursday, at which point they would be able to begin fixing a date for the voting to begin. The cardinals also said they would add a late afternoon meeting to their schedule on Thursday, an indication that they may want to speed things up.

The Rev. Thomas Rosica, a Canadian priest who is serving as the Vatican’s English-language spokesman during the interregnum period between popes, also said Wednesday that “what’s beginning to emerge (from the talks) is a profile of the next pope – what are the expectations and hopes for the next pope.”

But those are also the kind of sensitive details that the cardinals may not want broadcast beyond their own meetings. The irony of the news blackout, however, is that it may only serve to generate more leaks, and more of the speculative pieces that annoy the cardinals.

“If the Vatican won’t give the media proper information, then all the creative writing and conspiracy theories start coming out,” said Reese. “You have got to feed the lions – if not they will bite you!”