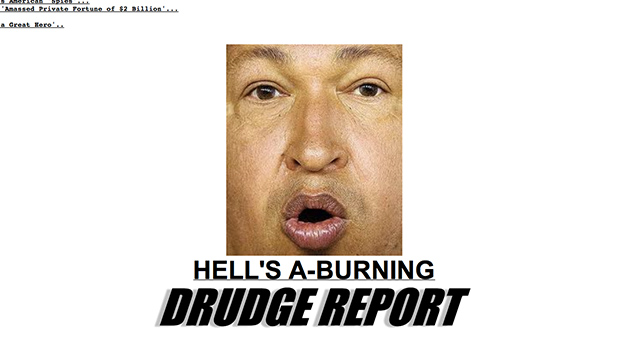 When news of Hugo Chavez’s death was first released, some people broke out their party hats. More than 200 patrons of El Arepazo, a Venezuelan restaurant outside of Miami, celebrated late into the night. Jim Treacher of The Daily Caller penned a column entitled, “Buh-Bye, Hugo Chavez,” saying, “The Vice President [of Venezuela] claims Chavez’s cancer was induced by his enemies … I don’t know about you guys, but I’m happy to take credit.” And under a giant picture of Hugo Chavez’s face, the editors at the Drudge Report posted the following caption: “HELL’S A-BURNING.”

They weren’t the only ones. Some Christians joined in too, using Twitter to announce their jubilation.

Todd Starnes is a Fox News Radio Commentator who is an outspoken Christian. He formerly served as assistant editor for Baptist Press and Communications Director for Union University, a Christian college in Jackson, Tennessee. He sent several tweets including one that said, “Hugo dead. The good news is now Saddam, Osama and Adolf have a fourth for Canasta” and “Hell is burning a little bit brighter tonight.”

Starnes, in the words of Baptist Press, “seeks to help the cause of Jesus through his work.”*

Loren Heal of the Heartland Institute, who describes himself as a “logical Christian,” tweeted, “A moment of silence [for] Hugo Chavez. OK, I spent my moment picturing you enjoying hell, jackass.”

And we wonder why many non-believers think Christians are judgmental and hateful?

Sadly, even some Christian pastors responded in kind. One student minister at a Christian church tweeted a link to a story about the president’s death adding, “The world is BETTER OFF!” He also retweeted a snarky note from the leader of a faith-based advertising agency, which said, “Sympathies to Danny Glover, Sean Penn and President Obama in the loss of Hugo Chavez.”

I can’t help wondering what kind of students this ministry is producing. Is this what we can expect from the future leaders of American evangelicalism?

While Hugo Chavez was alive, he was one of the world’s most polarizing figures. He declared a socialist revolution in his country, and his administration was notoriously corrupt. Though poverty rates in Venezuela were cut in half during the populist’s time in power, he made a name for himself as a heavy-handed dictator and America hating socialist. The man is now dead at 58 years old, two years after being diagnosed with cancer, an event which leaves Christians wondering how to respond.

Should Christians celebrate the death of this man knowing that his oppressive rule is now over?

I asked myself this same question nearly two years ago upon hearing that Osama bin Laden had been killed by Navy Seals in his Pakistan hideout, and I penned an article for Relevant Magazine wrestling with the issue:

I’m reminded of the words of Ezekiel: “As surely as I live, declares the Sovereign LORD, I take no pleasure in the death of the wicked, but rather that they turn from their ways and live” (33:11). The outcome that God desired and we should have too is that while Osama bin Laden was still breathing, he would have rejected doing any more evil and confessed Christ. This would have been cause for a true celebration—even the angels in heaven would have rejoiced (Luke 15:7). Anything short of this is a tragedy.

When justice is served to those who wish only to harm others—as it was last night—we may perhaps express relief. Relief in knowing innocent people woke up to a safer world this morning. But relief … not celebration. God loves those innocents, and I believe He desires to see them free from fear and violence. Yet even as our spirits lift knowing that this man will do no more evil, our eyes should burst forth with weeping knowing that bin Laden will likely spend eternity like he spent his life: separated from the true God.

Today, Jesus-followers cannot rejoice over news that Hugo Chavez has passed away. We exhale, perhaps, but do not rejoice. Instead, we pray that God will bless Venezuela & its people. We hope that freedom will begin to burst forth in this country even as they mourn the death of their leader. And we remind ourselves of our own depravity, recognizing that you don’t have to be president of Venezuela to harm others. You can simply log onto Twitter.

As it turns out, we all need grace.

* Editor’s Note: This post has been amended to clarify that Starnes’ desire to “help the cause of Jesus through his work” is the characterization of Baptist Press, not Starnes himself.