VATICAN CITY (RNS) A hierarchy looking to make a clear statement about where the troubled church is headed chose on Wednesday (March 13) the first member of the influential Jesuit order to be the next pope. Yet they also chose Cardinal Jorge Mario Bergoglio, a humble man who lives simply and took the name Francis (also a first) that evokes the founder of another great religious order. 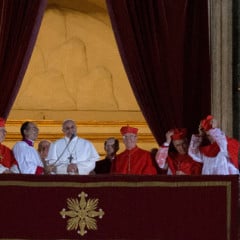 The College of Cardinals picked the first non-European in modern times, as well – yet he is the son of Italian immigrants and grew up in Argentina, perhaps the most European of any country in Latin America.

And the cardinals above all wanted a pastoral figure who would project an image of vigor and warmth to the world after the eight-year reign of Pope Benedict XVI — an introverted, gaffe-prone German theologian who was 78 when he was elected and retired last month at 85, saddled by the burdens of this very public office.

Yet in his stead they chose a soft-spoken 76-year-old who has been rapped for rarely cracking a smile — an image that Bergoglio did little to dispel with his low-key introduction as Pope Francis to the expectant crowd in St. Peter’s Square on a rainy Roman evening.

“Buona sera,” Francis said in deliberate, word perfect Italian, with just a slight Spanish accent. “You all know that the duty of the conclave was to give a bishop to Rome. It seems that my brother cardinals have come almost to the ends of the earth to get him … but here we are.”

So what, in fact, does the election of Francis say about the Catholic Church at this point in its history?

A global church in transition

Above all it signals that this is a huge church going through a historic transition, a growing flock of 1.2 billion souls whose senior leadership, in Rome and around the world, remains uncertain and even divided about how to address the rapid changes they are witnessing, and how to confront the many challenges they are facing — or which ones take priority.

The church in the Southern Hemisphere is growing and accounts for 70 percent of all Catholics, yet the home office is in Rome, and the College of Cardinals itself remains dominated by Europeans and especially Italians. The church is also facing challenges from rival faiths and Christian traditions, on the one hand, but a growing disinterest in religion or even loss of faith on the other. And Roman Catholicism remains an institutionally minded religion in an age that distrusts big organizations and prefers spirituality to beliefs. 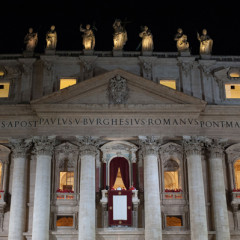 So the cardinals have again tried to get back to basics in order to face the future, but without taking too many risks.

In 2005, for example, Cardinal Joseph Ratzinger said he wanted to be named after St. Benedict, the founder of Western monasticism, in order to recall the church — especially in secularizing Europe — to its roots in small, prayerful communities of orthodox faith. Yet Benedict remained a scholarly, somewhat remote figure who could never translate his love of doctrine into a compelling message.

Now, in 2013, Bergoglio has brought to the papacy a passion for the poor and an example of humility and simple living that can draw the notice of an inattentive world — just as those attributes have since the early days of Christianity, on up through the great era of church reform in the Middle Ages.

As St. Francis of Assisi said, “Always preach the Gospel – use words if you have to.”

That was a theme picked up later by the Jesuits, who were born in the Counter-Reformation and went on to become the largest and most powerful order in the Catholic Church, evangelizing the New World and running universities but also becoming the champions of the poor in Latin America and elsewhere.

The Jesuits spoke truth to power, frequently running afoul of various regimes — and even sacrificing their lives — but also drawing the ire of church authorities in Rome who often saw them as too prophetic and insufficiently obedient.

Yet it was that willingness to live out the beliefs of the Gospels that also won people’s hearts more than words did, and there were signs that the cardinals meeting here in the last two weeks recognized the power of that witness as well.

“This mission of mercy has been entrusted by Christ to the pastors of his Church,” Cardinal Angelo Sodano, dean of the College of Cardinals, said on Tuesday at a Mass sending the electors into the conclave. “It is a mission that must be embraced by every priest and bishop, but is especially entrusted to the Bishop of Rome” — the pope.

In retrospect, that seemed to be a clear message that a humble church that lives like Jesus is the only way to reconnect with the modern world. Doctrinal edicts and theological principles, even couched in the most pastoral language, do not convince and church leaders cannot command.

In the early 1980s, the Catholic intellectual Alasdair McIntyre wrote an influential book about recovering faith in the modern world, called “After Virtue.” He ended his essay by declaring that people “are waiting not for a Godot, but for another — doubtless very different — St. Benedict.”

On Wednesday, it seemed that the College of Cardinals decided to go in another direction, gambling that the world is instead waiting not for a St. Benedict but for another — doubtless very different — St. Francis.

Whether they have found him in Pope Francis is another question. The new pope will have to reform the scandal-plagued Roman Curia with a bracing dose of his own humble style, and he will have to convince a leery public that the Catholic Church can live up to the same words its leaders preach to the pews.

It is another radical choice, another return to the church’s roots, yet one that the cardinals hope ends better than the last papacy.