VATICAN CITY (RNS) On his first day on the job, a new pope’s every act is parsed by millions who try to divine what kind of leader the head of the world’s largest religious community will be.

Cardinal Jorge Bergoglio seemed to be very much aware of this on Thursday (March 14), his first day as Pope Francis, and his gestures seemed to set the tone for a different style of papacy from the one of his predecessor. 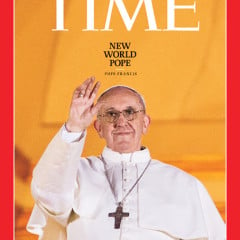 “We’ll get used to a new way of doing things,” said the Rev. Tom Rosica, a Vatican spokesman.

The signals, in fact, were there since the very first moments of his pontificate.

Bergoglio’s decision to be the first pope to take the name Francis was clearly meant to send a powerful message — one that the cheering crowd in St. Peter’s Square seemed to grasp immediately as French Cardinal Jean-Louis Tauran announced the name from the balcony of the basilica.

The Vatican’s chief spokesman, the Rev. Federico Lombardi, explained that the pope chose his name after Francis of Assisi, the saint of the poor who preached a radical return to the gospel to a medieval church steeped in pomp, luxury and power struggles with worldly leaders.

A few minutes after the announcement,  the new pope emerged and performed what Giovanni Maria Vian, editor of the Vatican’s semiofficial newspaper L’Osservatore Romano, called an “unprecedented and shocking” move: before imparting his blessing, he asked the crowd gathered in St. Peter’s Square to silently pray over him.

In fact, “unprecedented” seems to be the word most frequently used to describe the initial actions of the new pope.

Not only is he the first Latin American pope, the first Jesuit pope, and the first non-European pope in more than a millennium, Francis seems to be the first pope bent on shaking the ritualized world of Vatican traditions and taboos.

Returning from an early morning visit on Thursday to the Roman Basilica of St. Mary Major, Bergoglio reportedly asked his driver to make an unplanned stop at the Casa del Clero, a residence for priests where he spent the weeks ahead of the conclave.

After gathering his belongings, he personally thanked the staff and, to the gasps of papal aides, asked to pay his bill “to give a good example,” according to Lombardi.

The Vatican spokesman dished up many such details in his daily briefing with journalists on Thursday: after the blessing from St. Peter’s Basilica, Francis shunned the official Vatican state car that had been prepared for him, and rode back to the Santa Marta residence in a van with the other cardinals.

After a round of toasts at dinner following the election, Francis told his electors: “May God forgive you for what you have done,” according to Lombardi.

‘Each pope has his own life’

That simple, informal style is bound to raise more than a few eyebrows in the Vatican.

“Each pope has his own life,” Lombardi told journalists who asked whether Francis’ choices – such as eschewing an official motorcade and traveling in a normal Vatican police car on Thursday – will pose a security problem for the Vatican.

“Vatican security is at the service of the pope and they know it. They try to interpret what the pope wants. … They know that it’s not up to them to run the game but to the pope.”

But while many of Francis’ first moves seemed directed at blowing fresh air into staid Vatican rituals, on Thursday he also seemed capable of adding substance to style.

At an afternoon Mass in the Sistine Chapel with the 114 cardinals that elected him, he said church leaders “must always walk in the presence of the Lord, in the light of the Lord, always trying to live in an irreproachable way.”

The pope’s homily was short but heartfelt, using simple imagery as a parish priest would.

In a move that will reinforce his already good standing among Jewish leaders, Francis sent a short message to the chief rabbi of Rome, Riccardo Di Segni, to invite him to his installation Mass on March 19. “I strongly hope I can contribute to the progress in Catholic-Jewish relations experienced since the Second Vatican Council,” the pope wrote, according to Vatican Radio.

“We are in for more surprises,” said the Rev. Walter Insero, spokesman for the vicar of Rome, Cardinal Agostino Vallini, who stood at Francis’ side on St. Peter’s balcony.