(RNS) Jesuits are bound by oath not to seek higher office in the Roman Catholic Church, and now one of them has been elected to its highest office: Bishop of Rome, Vicar of Christ, Pontifex Maximus. 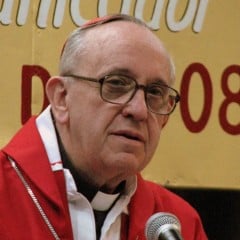 Pope Francis, the first Jesuit to become pope, not only represents a paradox for the papacy, but also the larger history of the Society of Jesus, as the Jesuits are formally known.

“On the one hand, Jesuits aren’t supposed to be in positions of authority,” said the Rev. Joseph Fessio, a Jesuit and founder of Ignatius Press. “On the other hand, they’re supposed to be obedient to the church.”

The Jesuits have played a key role in the history of the church. For centuries, they have served as its leading missionaries, founded its most prestigious universities and committed themselves to alleviating the deepest poverty.

St. Ignatius Loyola, a Spanish soldier, founded the order in 1540 after being wounded in battle and having a religious conversion during his convalescence. Jesuits are sometimes known as “God’s Marines,” after Loyola’s military history, and their missions worldwide.

Yet despite their prominence — at 18,000 members, they are the church’s largest religious order — Jesuits have had a complicated history with the institutional church and the hierarchy in Rome. With the first Jesuit pope, things just got a bit more complicated.

With their emphasis on missions work and intellectual pursuits, Jesuits often work on the margins of the church, sometimes overstepping boundaries set by Rome. It’s a point of pride among some Jesuits that they frequently challenge authority and seem to have a predisposition for coloring outside the lines.

“Since their founding, Jesuits have consistently offended people … But if there’s a barricade in the street, there’s going to be a Jesuit on both sides of that barricade,” said David Collins, a history professor at Georgetown University.

The left-leaning liberation theology movement that swept across Latin America in the 1970s and 1980s — including Francis’ native Argentina, where he headed the Jesuit order from 1973 to 1979 — is just one example. Bergoglio opposed it; many of his priests openly supported it.

Here in the United States, the New York-based Jesuit magazine America frequently challenges the hierarchy, so much so that one of Pope Benedict XVI’s first acts after his election was to order the removal of the Rev. Thomas Reese as editor.

“This is all new ground,” Reese said Thursday in Rome, where he’s working as an analyst on the papal transition for National Catholic Reporter.

“We never had a Jesuit pope, so I think we are all trying to figure out how this works, and it was a total surprise to everybody: surprise to the Jesuits, surprise to the media, probably a surprise to Pope Francis. This is something we’ll just work out as time goes on.”

Jesuits have also been accused of wielding too much influence, a concern that led Pope Clement XIV  to suppress the order in the 1700s. (Pope Pius VII restored the society in 1814.) The Superior General of the Jesuits is informally known as “the Black Pope” because of the power the position has held in the past.

In the early 1980s, when the Jesuit Superior General was sidelined by a stroke, Pope John Paul II stepped in with his own appointee, rather than allow the Jesuits to elect their own leader.

“That was his right as pope, but it still discouraged many Jesuits at the time, wrote the Rev. James Martin, an editor at America and the author of “The Jesuit Guide to (Almost) Everything,” in a piece for CNN. “With a Jesuit pope, that cloud has been, if not removed, then lifted much higher.”

Patrick Hornbeck, a theology professor at Jesuit-run Fordham University in New York, said Jesuits are accustomed to the tensions.

“Jesuits are on the frontiers and in the heart of the Catholic church,” he said. “And when you’re doing work on the margins, there’s going to be some natural friction with what’s happening in the center.”

Normally, if a Jesuit is appointed a bishop, he must first seek permission from his Jesuit superiors before he can accept the job. So what happens when a Jesuit is tapped to be pope?

“Most people think when the College of Cardinals comes and asks you to take on a job, that’s the voice of God telling you this is your new mission in life,” Reese said. “It’s pretty hard to say no to that.”

Collins said he hopes that new pope will bring some of his Jesuit training and tradition to bear during his papacy.

“Jesuits work hard to cultivate spiritual depth, and pragmatism. We get a glimpse of a little bit of that in (Bergoglio’s) time as bishop. He has a vision of simplicity and connection with the poor and marginalized,” Collins said. “I hope another part of what shapes his papacy is that pragmatic, let’s-get-it-done attitude.”

(Alessandro Speciale contributed to this report from Vatican City)