(RNS) What would an “atheist Lent” look like? A group of young nonbelievers are finding out, observing the Christian practice minus its religious context. 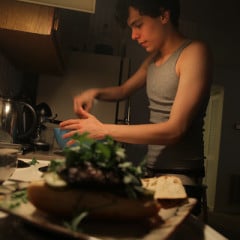 Vlad Chituc, 23, stirs Quinoa Tabbouleh near an already-made portobello burger at his apartment in Durham, N.C., Wednesday, March 13, 2013. Chituc, an atheist, is participating in Lent by converting from vegetarian to vegan, something he hopes to continue indefinitely as an act of good morals and good health. RNS photo by Ted Richardson

They have given up alcohol, animal products, and various Internet and cellphone interactions. One has vowed to make a daily Lenten practice of telling those he encounters how important they are to him.

But their observance of the 40-day period in which many Christians abstain from worldly desires in a bid to come closer to God has upset some atheists who say borrowing religious traditions is antithetical to nontheism.

The exercise has also illustrated a divide in the nontheist community —  between older atheists who see religion as inherently evil and younger atheists who are more open to interactions with religious belief.

“I really like the idea of Lent,” said Chelsea Link, 23, a Boston-based Humanist who is abstaining from alcohol. “It’s giving yourself a set amount of time to break a bad habit or form a new good one, and that seems like a really healthy practice. But we are not doing it because God told us to; we are doing it because there is a benefit to us.”

The idea of atheist Lent came from Vlad Chituc, a 23-year-old atheist blogger, who was inspired by the Swiss-born Humanist Alain de Botton, whose recent book, “Religion for Atheists,” suggests adapting religious rituals can create community and meaning among nonbelievers. 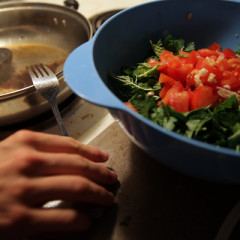 Vlad Chituc, 23, prepares Quinoa Tabbouleh and a portobello burger at his apartment in Durham, N.C., Wednesday, March 13, 2013. Chituc, an atheist, is participating in Lent by converting from vegetarian to vegan, something he hopes to continue indefinitely as an act of good morals and good health. RNS photo by Ted Richardson

“Religions have been working on how to live as good human beings for thousands of years,” Chituc said. “So it made sense to me that they have figured out some stuff that those of us trying to live good secular lives can learn from.”

Chituc observed his first Lent last year by eating a vegan diet. His success was limited, but he was inspired by the mindfulness of the experience.

“Atheists love to talk about abstract intellectual values like logic and reason,” he said, “but I realized that there were other things I needed to think about and I started being more aware of them.”

This year, Chituc, a lab manager in Durham, N.C., invited several fellow atheist bloggers to join him in observing Lent. A half dozen agreed, and they are tracking the experience on the blog NonProphet Status. All but one are under the age of 25.

Their posts have upset some atheists, including Tom Flynn, executive director of the Council for Secular Humanism. He wrote an online column refuting the idea and calling Lent, “one of the most profoundly anti-humanistic features of Christianity.”

In a telephone interview, Flynn singled out Lent as dangerous because it suggests atonement can be gained by giving something up — like meat on Fridays — instead of by making amends to those who have been wronged. And because atheists are not bound to a liturgical calendar, they can practice abstention any time. Vlad Chituc, 23, gets ready to eat his Quinoa Tabbouleh and portobello burger, much to the interest of his dog “Toad”, at his apartment in Durham, N.C., Wednesday, March 13, 2013. RNS photo by Ted Richardson

“More broadly, we have to be cautious in borrowing traditions and forms from the churches,” Flynn said. “There is an awful lot in congregational practices that hark back to an earlier pre-democratic, pre-Enlightenment time and that can bring a lot of baggage that is contrary to secular ideals.”

Chituc, meanwhile, is unimpressed with that argument. Instead, he is concerned he might offend religious observers of Lent.

“They might think it is trivializing to say all Lent is about is giving something up,” he said. “It is obviously more than that to them, so I am trying to say we are not trying to capture the meaning of your tradition, we are trying to make the most of our lives, and we have found something meaningful and useful in what you are doing.”

Virginia Kimball, a Catholic theologian at Assumption College in Worcester, Mass., who mentors people in Lenten practices, sees nothing wrong in atheists borrowing Lent. The desire to find meaning in ritual, she said, is a universal human desire.

“I give every credit to these young people who are humanists and atheists because they are sensing that human life is more than just animal processes and that is worthy of the great philosophers,” she said.

Chris Stedman, author of “Faitheist,” a memoir of his journey from evangelical Christianity to atheism, has joined Chituc in observing Lent. He thinks young atheists are more accepting of religious forms and believers than their older counterparts because they have grown up in a more diverse environment than previous generations.

Link, the Boston Humanist who’s giving up alcohol, agrees. She said she is distancing herself from organized atheism because of the hostility she feels it exhibits towards religion.

“I think there is definitely a transition going on,” she said. “A lot of younger atheists are saying, ‘I don’t believe in God either, but I don’t understand why you are foaming at the mouth about it.’”

News
Chicago church’s plan to fast from ‘whiteness’ for Lent gets pushback
Follow us on Facebook!
Submit your photos to RNS