LONDON (RNS) When journalist Henry Morton Stanley found the world’s most famous missionary barely alive at the tiny village of Ujiji on the shores of Lake Tanganyika on Nov. 10, 1871, he gave the English language one of its most famous introductions: “Dr. Livingstone, I presume?” 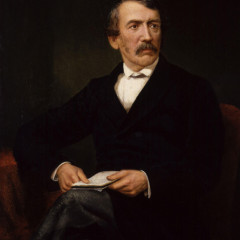 As Britain marks David Livingstone’s 200th birthday (pictured here) on Tuesday (March 19), Christians are being reintroduced to one of the greatest missionaries and explorers of the 19th century. Photo courtesy Wikimedia Commons/National Portrait Gallery in London

As Britain marks David Livingstone’s 200th birthday on Tuesday (March 19), Christians are being reintroduced to one of the greatest missionaries and explorers of the 19th century. A new book, meanwhile, introduces a darker side to Livingstone’s globe-trotting career and the corrosive effect it had on his marriage.

That 1871 meeting in the heart of Africa is the stuff of legend.

In 1864, Livingstone — already one of the world’s most famous men because of his trek across Africa and the 1855 “discovery” of the Victoria Falls that straddles modern-day Zambia and Zimbabwe — mounted an expedition to discover the source of the Nile River.

As months stretched into years, nothing was heard from the famed explorer.

Rumors swirled in London that he was dead. “Where is Livingstone?” yelled newspaper headlines. The public demanded an answer. By 1871, the hunt for Livingstone had reached fever pitch.

After eight months of back-breaking travel, Stanley arrived in Ujiji to learn that Livingstone was alive but far from well.

“I did not know how he would receive me,” he later wrote. “So I did what cowardice and false pride suggested was the best thing – walked deliberately to him, took off my hat and said, ‘Dr. Livingstone, I presume?’”

“Yes,” he said, with a kind smile, lifting his cap slightly.

And Livingstone answered: “I feel thankful that I am here to welcome you.”

Born into extreme poverty in Blantyre, Scotland on March 19, 1813, Livingstone started work as a mill hand at the age of 10, working up to 14 hours a day in temperatures that often reached 90 degrees.

Livingstone studied to become a medical doctor, and at age 27 he was accepted as a missionary to Africa. Soon after his arrival in 1840, he set three goals: to explore the continent, convert Africans to Christianity (he managed only one) and help end the slave trade. 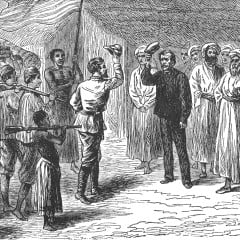 The letters he sent back to the London Missionary Society helped fuel the movement to end the slave trade, which he often described as “the world’s open and running sore.” His work sowed the seeds for the modern Anglican Communion, the global outpost of the Church of England scattered across the British Empire.

The former Anglican bishop of Botswana, Musonda Mwamba, added: “Livingstone identified very much with our people. He fell in love with Africa. He was one of us.”

Livingstone remains popular in his native Scotland and England, but also in Africa, where leaders are usually quick to tear down any street name or building that reminds them of their British colonial past. The Livingstonia Mission in Malawi was established by missionaries from the Free Church of Scotland in 1875, and remains a Christian learning center.

When Livingstone died at age 60 in 1873, two years after his meeting with Stanley, his heart was buried under a tree and his body was carried 1,500 miles to the coast by two loyal African servants, Susi and Chuma. It was then shipped by the Royal Navy to London, where it was later taken to Westminster Abbey for burial.

Tim Jeal, author of the classic 1973 biography “Livingstone,” believes the man was the victim (or recipient) of positive Victorian “spin.”

“It’s unfortunate that Livingstone was hijacked by the myth that grew up around him,” Jeal said. “Henry Stanley was a very gifted journalist who re-invented Livingstone as a near saint and he deliberately didn’t write the bits about him that were nasty.”

One of the nasty bits is detailed in a new book, “Looking for Mrs. Livingstone,” by Scottish historian Julie Davidson that chronicles Mary Livingstone’s lonely and brokenhearted descent into alcoholism.

Born to prominent Scottish missionary Robert Moffat, Mary met her future husband during his first trip to Africa and they were married in 1845. The couple had five children, but Mary endured several miscarriages. At the height of his fame, Livingstone sent his wife and children back to Scotland so he could explore on his own.

“Without him, she was wretched and vulnerable, couldn’t manage money, was tempted to drink too much and became increasingly embittered,” Davidson said.

Ravaged by the bottle, Mary begged the London Missionary Society for an advance on her husband’s salary in order to feed and clothe her children. Her petitions were usually greeted with contempt.

When Livingstone heard rumors that Mary was having an affair with a handsome 30-year-old minister, he demanded she leave the children in Scotland and join him in Africa at once. She set sail from Southampton, England, to Cape Town and rejoined her husband in 1862.

The couple was reunited, but Mary had lost her faith and belief that Christian missionaries in Africa served a useful purpose. Nine months later, she was dead from malaria. 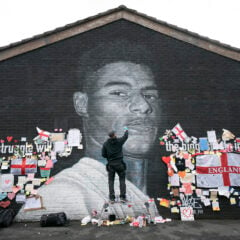