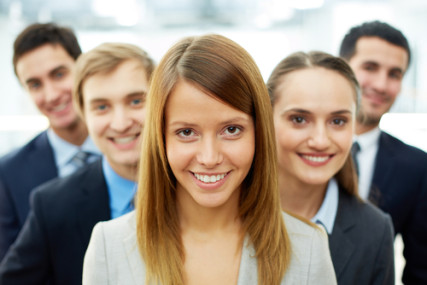 Some encouraging signs this month of increased visibility and leadership opportunities for Mormon women.

The Salt Lake Tribune reported last night that the scuttlebutt swirling on Facebook is indeed true: Mormon women are scheduled to pray at next month’s General Conference for what is likely the first time in LDS history.

Although the Church’s spokesperson did not confirm or deny the report, saying merely that the decisions on speakers and prayers had already been made, the Trib sounded mighty confident about its definitive headline. So I’m assuming that it has corroboration from other sources:

The Salt Lake Tribune has learned that LDS women are scheduled, as of now, to offer invocations or benedictions . . . .

For those who say that this is a tiny concession — a crumb from the master’s table, a tokenist acknowledgment — I would counter that heightened visibility for women in leadership is indeed important. Every time young women see the generation above them in leadership, it matters.

What’s more, it has happened at least in part because women have been asking for precisely this. Beginning with Neylan McBaine’s outstanding speech at FAIR last summer and also including a targeted letter and email campaign last year, the drive to have women pray in Conference started with women themselves.

And that matters tremendously. (For more behind-the-scenes news and opinions, see this great post today on Feminist Mormon Housewives.)

In other positive news for Mormon women, here are four other news items that have happened in the last week or so:

1) The LDS Church sponsored a “side event” at the UN in early March as part of the United Nations’ Commission on the Status of Women. Sharon Eubank, the first woman ever to head up LDS Charities, spoke about improving the lives of women around the world by expanding access to health care and ending violence against women. In her remarks she discussed the legacies of Eliza R. Snow and Ellis Shipp, two nineteenth-century Mormon women who saw the need for improved medical care for women on the frontier and worked the problem by sending fellow Mormon women back east to medical school. Rock on, Sister Eubank.

2) Twilight novelist Stephenie Meyer has outed herself as a feminist. She even used the F word in an interview! (No, not that F word, you sewerhead.) She says:

“I think there are many feminists who would say that I am not a feminist. But, to me … I feel like the world is a better place when women are in charge. So that kind of by default makes me a feminist. I love working in a female world.”

3) Internet discussions have revealed that some local wards are having young women (12-18) serve as ushers in sacrament meeting. An exciting, and long-overdue, development.

4) And finally, the new sister missionaries are hitting the streets in droves, with the first wave coming out of the MTC for postings around the globe. Now that the age limit has been lowered, missionary applications have surged from prospective missionaries in general and young women in particular. This change in policy is going to have far-reaching impact on the leadership and confidence of thousands of Mormon women in the decades to come.

A good couple of weeks, all in all. Keep fighting the good fights, my sisters. Lean in.

The image of female and male leadership is used with permission of Shutterstock.com.

Flunking Sainthood
Softening Mormon patriarchy, one correction at a time
Follow us on Facebook!
Submit your photos to RNS