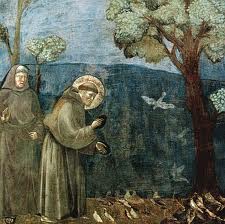 Anyone who follows the hierarchy of the Catholic Church knows that Job One over the past few years has been something called The New Evangelization. Pope Benedict created a Pontifical Council to advance it. But Pope Francis has sent signals that he's not entirely down with the program.

The stated purpose of TNE, outlined in Benedict's apostolic letter Ubicumque et Semper, is to re-evangelize the people of historically Christian countries so that they can mount a missionary effort to turn back the tide of secularism in today's world. The core of the project is doctrinal--promotion of the Church's catechism "as an essential and complete formulation of the content of the faith for the people of our time."

The hard edge of TNE is evident in the U.S. Catholic Bishops' enunciation of the "intellectual tasks" of TNE, which features their doctrine committee's 2011 condemnation of Fordham University theologian Elizabeth Johnson's popular Quest for the Living God.

This does not seem to be Francis' style. He has already singled out for praise a book on God's mercy by Cardinal Walter Kaspar, who has drawn the ire of conservative rigorists. In addressing the journalists who covered his election, he was careful not to impose the sign of the Cross on those of other faiths and non-believers. He has spoken of making common cause with secular people of good will.

Over at NCR John Allen pushes back against the growing sense that Francis is a kind of anti-Benedict by pointing out that, in today's talk to the Vatican diplomatic corps, the new pope cited his predecessor's critique of the "tyranny of relativism."

The message seemed clear: Pope Francis will try to live up to his namesake, Francis of Assisi, as a man of the poor and of peace, but that doesn’t signal any retreat from the moral and cultural positions associated with the papacies of John Paul II and Benedict XVI.

Well sure, no one expects Francis to come out of the closet as a moral relativist. But the point he was making to the diplomats had to do with the need to build bridges to those who do not share our positions:

There cannot be true peace if everyone is his own criterion, if everyone can always claim exclusively his own rights, without at the same time caring for the good of others, of everyone, on the basis of the nature that unites every human being on this earth.

Those others include people of other faiths and also "non-believers, so that the differences which divide and hurt us may never prevail, but rather the desire to build true links of friendship between all peoples, despite their diversity." Contra Allen, Francis was using the principle of our common nature to insist not on his own tradition's truth claims but on the need not to let differences get in the way of peace.

It may be worth noting that five of the 10 cardinals Benedict appointed to serve on the New Evangelization Pontifical Council--Ouellet, Ravasi, Scherer, Schönborn, and Scola--were leading candidates to succeed him, and that Bergoglio was not among them. If I had to guess, Pope Francis will seek to advance his faith more by moral example than by catechetical word. Call it TNE 2.0.