WASHINGTON (RNS) Secretary of State John Kerry is calling for the release of an Iranian-American minister from a Tehran prison, a welcome step for advocates who had accused the State Department of being “AWOL” on the case. 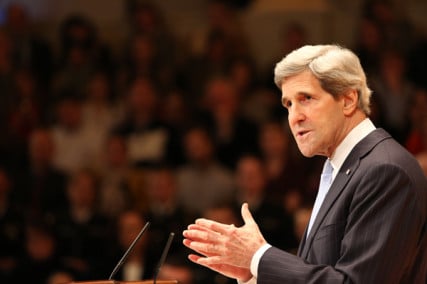 Supporters of an Iranian-American minister who says he is being tortured in a Tehran prison hailed Secretary of State John Kerry’s call for his release. Photo courtesy US State Department

“I am deeply concerned about the fate of U.S citizen Saeed Abedini, who has been detained for nearly six months and was sentenced to eight years in prison in Iran on charges related to his religious beliefs,” Kerry said in a statement released Friday (March 22).

“I am disturbed by reports that Mr. Abedini has suffered physical and psychological abuse in prison, and that his condition has become increasingly dire.”

“The best outcome for Mr. Abedini is that he be immediately released,” Kerry concluded.

The American Center for Law and Justice, a conservative Washington law firm that is representing Abedini’s wife, welcomed his involvement.

“By speaking out directly on behalf of Pastor Saeed, Secretary Kerry is taking our government’s most aggressive action yet in working to secure the freedom of this U.S. citizen,” said Jordan Sekulow, executive director of the ACLJ.

Kerry and his department came under fire at a March 15 Capitol Hill hearing on Iran’s treatment of religious minorities when the State Department did not send a representative, citing “scheduling conflicts.” Naghmeh Abedini, who lives with her two children in Idaho, met with State officials after the hearing.

“I am hopeful that this will put more pressure on the Iranian government to act and free Saeed so he can return to our family in the United States,” she said in a statement after Kerry called for her husband’s release.

In a letter posted on the ACLJ’s website, Saeed Abedini, 32, spoke of being beaten and housed in a “dark room void of any natural sunlight.”

“I did not recognize myself” when he looked in a mirror after being beaten, Abedini said. “My hair was shaven, under my eyes were swollen three times what they should have been, my face was swollen, and my beard had grown.”

The ACLJ said his family received the letter, written on scraps of newspaper, on March 21.

The day before Kerry’s statement, Ambassador Eileen Chamberlain Donahoe, the U.S. representative to the U.N. Human Rights Council in Geneva, called for Iran to release Abedini and “and others who are unjustly imprisoned.”

News
Confusion over Iran’s religious police as women drop hijab
Follow us on Facebook!
Submit your photos to RNS