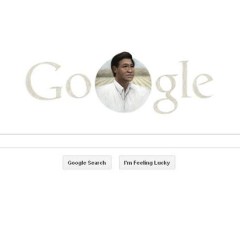 Hope everyone had a lovely Cesar Chavez day!

Some Christians were upset that Google chose to honor the Mexican-American labor icon — instead of Easter on Sunday.

The brainy crowd at First Things, on the other hand, says it was fitting to render onto Cesar.

They might not have been as happy if Google had doodled Hugo Chavez.

Over in Syria, Christians experienced real Holy Week hardship, dodging mortar shells and gunfire as they wondered where next Easter might find them.

Pope Francis celebrated his first Easter as pope, fresh off the controversy over his washing of women’s feet during a Maundy Thursday ritual.

By the way, if it’s against “church law” to invite women to participate in the rite, someone should tell the U.S. Catholic bishops.

Word is, Francis now plans to wash the feet of every single soul on planet Earth.

Cardinal Dolan of NY says the church “has not been too good” at separating its opposition to gay marriage from a general attack on gays and lesbians.

President Obama attended Easter services at an Episcopal church near the White House and heard a sermon that criticized “captains of the religious right,” according to the AP.

Mormon Marie Osmond says having a gay child has made her pro-same-sex marriage.

Some atheists are looking to shed their “grumpy Gus” image, our own Kimberly Winston reports.

Will image matter if atheists keep suing over things like the WTC cross?  A judge ruled that the cross should stay because it helps tell the 9/11 story.

The U.S. Air Force has its first female rabbi, The Forward reports.

Hindus celebrated Holi this weekend, and our ace photographer Sally Morrow has the colorful video.

Is religiosity in kids a symptom of mental illness? Maybe, but Time doesn’t bring enough info to bear.

My favorite line: “Some children suffer from scrupulosity, a form of OCD that involves a feeling of guilt and shame. ”

Or, as I call it, “My Catholic Childhood.”

You don’t have to be particularly scrupulous to receive our Religion News Roundup. Just sign up below. It’s free.