HUNTINGTON, Indiana, April 2, 2013 – A week ahead of schedule, Catholic publisher Our Sunday Visitor unveils the first English-language profile of the new pope, Pope Francis (Our Sunday Visitor, 224 pages, with 16 pages of color photography, $16.95) in both paperback and Kindle versions.

Acclaimed Church historian and biographer, Dr. Matthew Bunson, senior correspondent for Our Sunday Visitor and author of over 45 books, has already done scores of media interviews worldwide on Pope Francis. He is poised to discuss the new Holy Father, including his engaging leadership style, powerful preaching approach, much-talked-about gestures toward the poor and the forgotten, and decision not to reside in the Apostolic Palace apartments.

Bunson’s account on the new pontiff is based on years of research and observation of Cardinal Jorge Mario Bergoglio (now Pope Francis) among the College of Cardinals, as well as of Pope Emeritus Benedict XVI.  He also penned the first English-language biography of Benedict XVI in 2005. 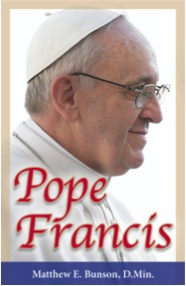 The book is split into three parts to get a sense of what led to the selection of Pope Francis, and what it means regarding where Pope Francis goes from there. First, Bunson puts forth a comprehensive analysis of the unprecedented final days of the pontificate of Pope Benedict XVI. Next the book features an enlightening perspective on the interregnum and the biggest issues facing the Cardinals as they headed into the conclave. Finally, more than 150 pages are devoted to Pope Francis himself including:

With its research conducted in five different languages into the lives and ministries of the world’s leading Cardinals, their backgrounds, writings and homilies, Pope Francis not only shows why Cardinal Bergoglio was ultimately elected as the Church’s 266th pope, but what lies ahead for this servant of the Church.  The book also features 16 pages of color photography of the new pope, past and present.

As the world's largest English language Catholic publisher, working closely with the Vatican as its North American distributor of the official Vatican newspaper, L'Osservatore Romano, as well as over a dozen books from Pope Benedict XVI, Our Sunday Visitor is uniquely suited to publish the premier papal biography by supporting Bunson's efforts with additional resources, key contacts, and vast institutional knowledge. For Our Sunday Visitor, Pope Francis is seen as a service to Catholics and non-Catholics across the globe for getting to know their new leader and inspiring everyone to follow his lead in bringing the light of hope to all.

Bunson is also a professor of Church History and a consultant to news organizations all over the world, including USA Today, CNN and ABC News, and has appeared on countless radio and television programs, including MSNBC, Fox News, EWTN, Relevant Radio, the BBC, NPR and France 24.

For an interview with Dr. Matthew Bunson, please contact Christine Valentine-Owsik at: (215) 230-8095 or [email protected]

ABOUT OUR SUNDAY VISITOR

The world’s largest English-language Catholic publisher, Our Sunday Visitor serves millions of Catholics globally through its publishing, offertory, and communication services. Established in 1912, Our Sunday Visitor publishes a wide range of books including Bibles, biographies of the saints, books by Pope Benedict XVI, children’s books, devotionals, bible studies, inspirational works, and curriculum. Our Sunday Visitor is a not-for-profit organization, returning a portion of net earnings back to the Catholic community through the Our Sunday Visitor Institute.  For more information, visit www.osv.com.

For the last 20 years, Dr. Matthew E. Bunson has been active in Catholic Social Communications, including writing, editing, and lecturing on a variety of topics related to Church history, the papacy, and Catholic culture.

In 2005, Dr. Bunson authored the first biography of Pope Benedict XVI in English. He is also the co-author of the upcoming Encyclopedia of the U.S. Catholic History. Since 1997, he has served as general editor of Our Sunday Visitor’s Catholic Almanac. In addition, he has been editor of The Catholic Answer Magazine since 2010 and is a professor of History and Church History for the Catholic Distance University in Virginia.

During the 2005 papal interregnum and conclave, as well as the 2013 papal transition, Bunson served as a special consultant to USA Today and has appeared as a guest on many television and radio programs. Aside from his Doctor of Ministry degree from the Graduate Theological Foundation, Bunson holds a Bachelor’s degree in History, and two Master’s degrees in Theology. He is currently engaged in doctoral studies for a Ph.D. in Church History.