VATICAN CITY (RNS) Pope Francis on Wednesday (April 3) said women play a “fundamental role” in the Catholic Church as those who are mostly responsible for passing on the faith from one generation to the next. 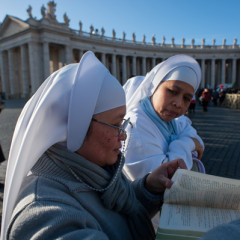 Nuns attend the inauguration Mass of Pope Francis at St. Peter’s Square on Tuesday (March 19) at the Vatican. RNS photo by Andrea Sabbadini

While the new pope stopped far short of calling for women’s ordination or giving women more decision-making power in the church, his remarks nonetheless signaled an openness to women that’s not often seen in the church hierarchy.

“In the church and in the journey of faith, women have had and still have a special role in opening doors to the Lord,” the Argentine pontiff said during his weekly audience in St. Peter’s Square.

On Thursday (March 28), Francis surprised Catholics – and drew the ire of traditionalists – when he included two women in a foot-washing ceremony at a youth prison in Rome.

Critics say the rite is a re-enactment of Jesus’ washing the feet of the 12 male apostles, and the inclusion of women might reopen the debate over the ordination of women to the priesthood.

As Cardinal Jorge Bergoglio, the future pope clearly stated his opposition to women priests. Still, advocates for women’s rights in the church hope Francis will give women more leadership positions within the church.

“There are some lay people in the Vatican leadership,” said Sister Christine Anderson, a British nun who trains women leaders in Catholic organizations throughout the world. “There is no reason why (women) couldn’t be there too.

“Many women have more theology than some priests. So it’s not that we are not trained. … I think it’s really that we just have not grown up yet as a church,” she added.

Sister Chris Schenk, executive director of FutureChurch, a Cleveland-based group that advocates for a greater role for women in the church, said Francis has been “doing great” at the symbolic level since his election, but “the proof will be in what steps the Vatican takes to begin to incorporate women’s voices and experience at all levels of Church ministry and decision-making.”

In his Wednesday audience, the pope said “the mission of women, of mothers and women,” in the church is “to give witness to their children and grandchildren that Christ is Risen,” a line that left Schenk “disappointed.”

For Schenk, women are more than just mothers, and “there are many women leaders of faith communities around the world.”  She hopes Francis will allow women to become permanent deacons, the last step before the priesthood – a role that is currently open to married men.

“This will effectively end the silencing of Catholic women in our churches,” she said.

Ahead of the conclave that elected Francis, German Cardinal Walter Kasper called for the creation of a new “deaconess” role within the church that would have different tasks from that of deacons.

For Anderson, the controversy over women priests or deacons should not overshadow the real question of women’s leadership within the church.

During his Wednesday audience, Francis highlighted the role of women in the church’s earliest days, noting that the Gospels call them the first witnesses of Jesus’ resurrection.

At the time, women’s testimony was considered unreliable, so if the story of Jesus’ resurrection was “invented,” the pope said, “it would not have been linked to the testimony of women.”

Instead, “the evangelists simply narrate what happened: the women were the first witnesses. This tells us that God does not choose according to human criteria.”