(RNS) A new film about Jackie Robinson, titled “42″ — the number he wore during his historic career — tells the triumphant story of how the Civil Rights icon integrated professional baseball by playing for the Brooklyn Dodgers. But there’s a mysterious hole at the center of this otherwise worthy film. 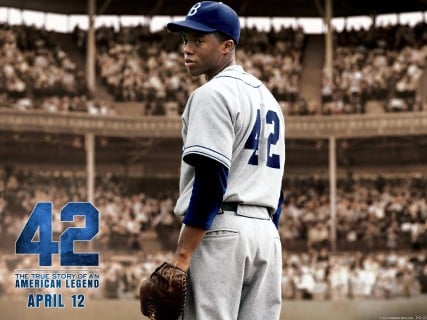 A new film about Jackie Robinson, titled 42 — the number he wore during his historic career — tells the triumphant story of how the Civil Rights icon integrated professional baseball by playing for the Brooklyn Dodgers. Photo courtesy http://42movie.warnerbros.com

The man who chose Robinson for his role, and masterminded the whole affair, was Dodgers General Manager Branch Rickey, played by Harrison Ford. In their initial meeting, the cigar-chomping Rickey makes it clear that whoever will be the first African American in major league baseball will be viciously attacked, verbally and physically. So Rickey famously says he’s looking for a man “with guts enough not to fight back.” He needs someone who will resist the temptation to retaliate. Robinson agrees to go along with it.

But where did Rickey get that crazy idea and why did Robinson agree? The film doesn’t tell us, but the answers to these questions lie in the devout Christian faith of both men.

Why Robinson was chosen

For starters, Rickey himself was a “Bible-thumping Methodist” who refused to attend games on Sunday. He sincerely believed it was God’s will that he integrate baseball and saw it as an opportunity to intervene in the moral history of the nation, as Lincoln had done.

And Rickey chose Robinson because of the young man’s faith and moral character. There were numerous other Negro Leagues players to consider, but Rickey knew integrating the racist world of professional sports would take more than athletic ability. The attacks would be ugly, and the press would fuel the fire. If the player chosen were goaded into retaliating, the grand experiment would be set back a decade or more.

Rickey knew he must find someone whose behavior on and off the field would be exemplary, and who believed “turning the other cheek” was not just the practical thing to do but the right thing. In their historic meeting, to underscore the spiritual dimension of the undertaking, Rickey pulled out a book by Giovanni Papini, titled Life of Christ. He opened to the passage about the Sermon on the Mount and read it aloud.

We know that Robinson’s passionate sense of justice had gotten him into trouble earlier in life. But the patient mentoring of pastor Karl Downs convinced him that Christ’s command to “resist not evil” wasn’t a cowardly way out but a profoundly heroic stance.

When he met Rickey, Robinson was prepared for what lay ahead and agreed. But it was a brutally difficult undertaking. Robinson got down on his knees many nights during those first two years, asking God for the strength to continue resisting the temptation to fight back, or to say something he would regret.

But the filmmakers of “42″ were evidently uncomfortable with all this and simply avoided it. To put it in baseball terms, they decided to pitch around it.

Of course, Hollywood has been skittish about faith and religion since at least the late 1960s. Even when it’s almost impossible to avoid, filmmakers find a way. The Johnny Cash biopic “Walk the Line” omitted the central role Christian faith played in how Cash overcame drug addiction. Even in 2007’s “Amazing Grace,” about British abolitionist William Wilberforce, the story of his conversion and the huge role faith played in his political efforts is essentially left out.

And now in 42, Hollywood’s done it again, check-swinging a bloop single past the infield when a fence-clearing clout — or at least extra bases — was easily possible.

Omitting the role of faith in this story does a serious disservice to history — and to the memories of Robinson and Rickey. But it’s also financially foolish. The recent megasuccess of “The Bible” miniseries and the cool $600 million earned by Mel Gibson’s “The Passion of the Christ” in 2004 are just two reasons why. The audience for faith-friendly films is huge and growing.

Which brings us back to another reason Rickey did what he did. He believed bringing African Americans onto the baseball field would bring them into the stands, too, and ticket sales would increase. Which is precisely what happened.

So isn’t it time Hollywood integrated faith into stories where it rightfully belongs? Why should such stories be excluded from the mainstream in a nation that’s filled with people of faith? If filmmakers do the right thing — and break the “God line”— they’ll find there are countless millions who’d cheer stories like that. And who’d pay to see them too.

(Eric Metaxas is the author of Bonhoeffer: Pastor, Martyr, Prophet, Spy. He writes about Jackie Robinson in his new book “Seven Men and the Secret of their Greatness.” This column originally appeared in USA Today.)