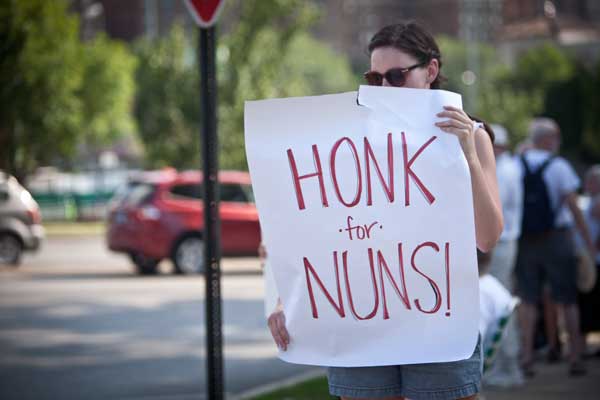 Anna O’Connor holds a sign “Honk for Nuns” to passing traffic during a rally to honor American nuns at J.C. Nichols Memorial Fountain on the Country Club Plaza in Kansas City, Mo. on Tuesday June 19, 2012. The event was organized by local residents and the nationwide organization Call to Action, a Catholic movement working for equality and justice in the church and society. RNS photo by Sally Morrow

VATICAN CITY (RNS) Nearly a year after the Vatican announced a makeover of the largest umbrella group for American nuns, Pope Francis has directed that the overhaul of the Leadership Conference of Women Religious continue.

The decision, while not entirely unexpected, could nonetheless bring an end to Francis’  honeymoon with the many American Catholics who had viewed the crackdown on nuns as heavy-handed and unnecessary.

Archbishop Gerhard Ludwig Mueller, who heads the Vatican’s Congregation for the Doctrine of the Faith, met on Monday (April 15) with the LCWR’s leadership for the first time since Francis’ election on March 13.

According to a Vatican statement, during a recent discussion of the case with Mueller, Francis “reaffirmed the findings” of the Vatican investigation and the “program of reform” for LCWR that was announced on April 18, 2012.

In what was seen as one of the defining acts of Pope Benedict XVI’s papacy, the Vatican’s doctrinal office issued a “doctrinal assessment” that criticized the LCWR for not speaking out strongly enough against gay marriage, abortion and women’s ordination.

The Vatican also chided the women for “serious doctrinal problems” among many LCWR members, and said LCWR conferences suffered from “a prevalence of certain radical feminist themes incompatible with the Catholic faith.”

Monday’s meeting was Mueller’s first with the LCWR since Benedict appointed him to the post last summer, and he thanked the nuns for their “great contribution” to the Catholic Church in the U.S., especially “in the many schools, hospitals, and institutions of support for the poor” that were founded and staffed by religious sisters.

But the Vatican’s doctrinal chief also emphasized that organizations such as the LCWR remain “under the direction of the Holy See,” and that their task is to promote “cooperation” with local bishops and bishops’ conferences. 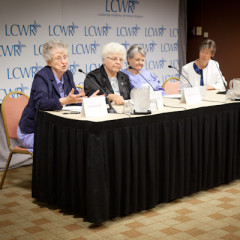 The LCWR, which represents most of the 57,000 Catholic sisters in the U.S., had called the accusations “unsubstantiated” and expressed “deep disappointment” with the Vatican makeover. In a statement issued after Monday’s meeting, LCWR leaders called the meeting “open and frank.”

“We pray that these conversations may bear fruit for the good of the Church,” it added.

LCWR had congratulated Francis on his election for his “great dedication to the mission of the church during his leadership in Argentina.” The group said it looked forward to “working with him in carrying forward the Gospel message.”

Some Catholic observers said Francis’ background in a religious order — the Jesuits — could impact his views of women in religious orders, both in the U.S. and around the world.

Beyond the Monday meeting, the Vatican appears to be getting down to business as Francis crossed the one-month mark of his papacy. On Saturday, he named an informal cabinet of eight cardinals to advise him on running the church and on reforming the scandal-ridden Roman Curia, the church’s central administration.

The group, which includes Cardinal Sean O’Malley of Boston, will meet for the first time in early October in Rome, but the Vatican stressed that the pontiff “is already in contact with the cardinals.”

In the run-up to the conclave that elected Francis, several cardinals had voiced concern about the mismanagement and infighting in the Curia, which is mostly staffed by Italian churchmen. 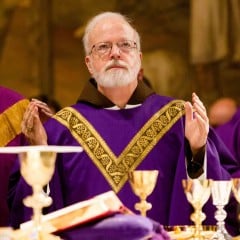 According to a Vatican press statement, the pope decided to create the cardinals’ cabinet in order to follow up on a “suggestion that emerged during the General Congregations,” the cardinals closed-door meetings that preceded the conclave.

Only one of the eight cardinals chosen by Francis comes from Italy, Giuseppe Bertello, who currently oversees the Vatican City State.

The other seven lead in different regions of the world. They are:

Maradiaga will coordinate the group’s work, while Bishop Marcello Semeraro of Albano, Italy, will have the role of secretary.

In a brief meeting with journalists on Saturday, the Vatican’s chief spokesman, the Rev. Federico Lombardi, stressed that the group will in no way “diminish the role” of the Curia or its responsibilities.

He said that while the Curia remains in charge for the day-to-day task of “helping the pope in the running of the church,” the eight cardinals will “advise” the pope when they are requested to do so.

According to Lombardi, the creation of the cardinals’ group is a “signal of the pope’s reflection and attention on the issues facing the organization of the church.”