(RNS) Reports this week that the late Pope John Paul II may be on the verge of sainthood after a second miracle was credited to his intercession aren’t a huge surprise: When he died eight years ago, crowds were already clamoring for his canonization, and Pope Benedict XVI quickly waived the usual five-year waiting period to get the process rolling. 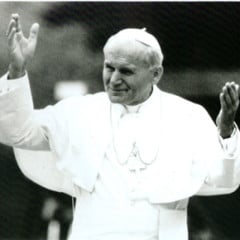 Pope John Paul II gestures in a still from the PBS frontline show, “John Paul II: The Millennial Pope.” The pontiff, who has always attracted media attention is the subject a new book as well the PBS television show airing Sept. 28.

But the news that Pope Francis, just six weeks on the job, has cleared the way for the long-stalled canonization of martyred Salvadoran Archbishop Oscar Romero is a stunner that sends another important signal about the new pope’s priorities.

“Sainthood is often as much about politics and image as anything else,” said the Rev. Harvey Egan, a Jesuit priest and professor emeritus of theology at Boston College.

“It’s not surprising to me that this present pope being from South America, having the same inclinations as Romero, would unblock the process and say ‘Push his cause through,’ and I think rightly so.”

Almost from the moment that Cardinal Jorge Bergoglio was chosen as the first pope from the Southern Hemisphere, hopes soared among Romero’s many supporters that the Argentine pope’s dedication to the poor would make him a believer in Romero’s sainthood.

Romero was a vocal champion of the poor and for human rights in El Salvador; during the country’s bloody civil war, he was  gunned down by a right-wing death squad in 1980 while celebrating Mass. He was immediately hailed as a martyr, becoming an icon of the church’s struggle for social justice and against oppression.

But that support also raised red flags at the Vatican, where Pope John Paul II and his top doctrinal cop, Cardinal Joseph Ratzinger – the future Benedict XVI – thought the devotion to Romero was too closely tied to left-leaning causes like liberation theology. 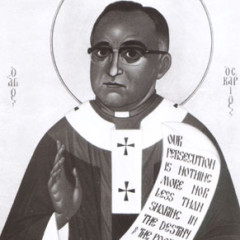 An icon shows the late Archbishop Oscar Romero of El Salvador, who was assassinated 25 years ago. RNS file photo

As a result, Romero’s cause for canonization never gained momentum. The process was formally opened in 1997, but even those involved in the case said nothing was happening.

But after Benedict’s surprise resignation and Francis’ even more surprising election a month later, Archbishop Vincenzo Paglia, the Vatican official charged with pushing Romero’s cause, announced on Sunday (April 21) that he had met with Francis the day before, and Romero’s cause was now “unblocked” and could proceed.

Because Romero was assassinated, he could be declared a martyr if the Vatican determined that he was killed because of his faith rather than solely for political reasons. If classified a martyr, the church could bypass the normal rules and beatify him. Then he’d need only one miracle — not the normal two — to be named a saint.

These days, the miracles are usually unexplained medical cures; in 2005, a French nun was reportedly cured of Parkinson’s disease after prayers were said to John Paul on her behalf. That miracle led to his beatification in 2011, the step before formal canonization as a saint. This week an Italian Catholic magazine reported that a Vatican panel of seven medical experts approved the verdict of a miraculous healing of an unnamed woman.

The report has prompted speculation that John Paul could be named a saint as early as this October, around the 35th anniversary of his 1978 election. 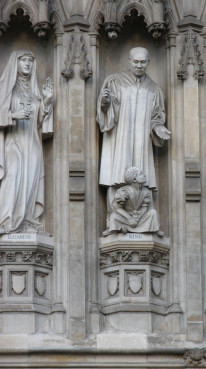 Pairing the canonizations of John Paul and Romero is a scenario that would raise eyebrows, but the idea is not unprecedented in the politics of saint-making.

In 2000, John Paul himself beatified both Pope Pius IX, a staunch traditionalist considered an enemy of modernity, and Pope John XXIII, who convened the Second Vatican Council (1962-65) and helped usher the church into the modern era.

In 2009, Benedict paired an announcement advancing the canonization process for his controversial wartime predecessor, Pius XII, with a similar decree regarding John Paul II, who was considered a great friend to the Jewish community.

Pairing the canonizations of the patron saint of liberation theology with the pope who tried to suppress it would be unconventional — but perhaps not for Francis, who already has proven himself to be the most unconventional of popes with a set of priorities all his own.