NEW YORK (RNS) A former adviser to Sarah Palin and an attorney with a long record of advocating conservative causes, will become the first spokeswoman for the president of the U.S. Conference of Catholic Bishops, the USCCB announced Monday (April 29). 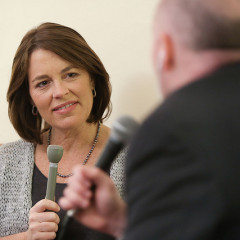 Kim Daniels (pictured here on March 13, 2013), a former advisor to Sarah Palin and an attorney with a long record of advocating conservative causes, will be the new spokesperson for the president of the U.S. Conference of Catholic Bishops. Photo courtesy George Martell/The Pilot Media Group via Flickr (http://flic.kr/p/e2TAVn)

The addition of Kim Daniels, who is a leader of the conservative media lobby, Catholic Voices USA, seems aimed at revamping the hierarchy’s communications strategy, which many bishops say has been hampered by a lack of coordination and an authoritative spokesperson.

Under the new structure, Daniels will speak for the president of the bishops’ conference — currently New York Cardinal Timothy Dolan — while the USCCB’s media office will continue to speak for the bishops as a whole.

Daniels’ hiring also looks like an effort to satisfy Dolan’s goal of finding an “attractive, articulate, intelligent” laywoman to help recast the hierarchy’s image, which many feared was starting to be seen as unfriendly to women because of legal battles like the fight against the Obama administration’s contraception mandate.

Daniels has experience in that field, having worked for years with the Thomas More Law Center, a conservative legal group, where she fought, for example, for the rights of pharmacists to claim a conscience exemption from dispensing morning-after pills. Such religious liberty battles have become a public policy priority for the bishops, and having Daniels on board gives another veteran voice to the bishops’ campaign.

Yet the hiring — Daniels has been working on a “contract basis,” according to the USCCB — also raises many questions that the USCCB’s brief press release did not answer.

One is whether Daniels will deflect controversies or become a lightning rod herself.

Not only did she work for the Thomas More Law Center, which has a reputation as one of the more strident groups on the political right, but Daniels was also a paid adviser to Palin as the former Alaska governor tried to remodel herself following her candidacy as John McCain’s running mate on the 2008 Republican ticket that lost to Barack Obama.

Daniels — who also did legal work for the McCain campaign, according to The New York Times — was described as “Palin’s personal domestic policy czar” in 2010 and prepared daily briefings and speeches for her. But Palin has continued to alienate herself from all but her most loyal fans on the movement’s right flank, and it is not clear where Daniels’ relationship with Palin stands today.

Moreover, Daniels’ hiring could come off as exploiting her gender. A year ago Dolan said that the USCCB would do better to hire an “attractive, articulate, intelligent” laywoman to present its message because, as he put it, “In the public square, I hate to tell you, the days of fat, balding Irish bishops are over.”

Yet Daniels, a mother of six, will also have to be credible, which means she would need to have a clear mandate. Daniels will work under the USCCB’s general secretary, Monsignor Ronny Jenkins, not in the USCCB’s media shop.

“Kim Daniels is not in the Communications Department,” Sister Mary Ann Walsh, who has been the main spokeswoman for the bishops, said in an email. “As head of the USCCB Office for Media Relations I speak to the media in that capacity.” As a result, it’s not certain how Daniels will affect the communications strategy of the hierarchy — whether as a behind-the-scenes policy person, or as a public face for the bishops’ policies.

It seems like new territory for everyone. The president of the USCCB has never had a personal spokesperson, and her hiring appears to be a compromise solution to a complex problem. During a meeting of all the bishops last June, there was an intense debate — indeed, the longest discussion of their two-day meeting — over whether having a single person speak for all the bishops would undermine their individual authority.

Hiring a spokesperson “would make half of us redundant within five years,” argued Bishop Timothy Doherty of Lafayette, Ind.

But Archbishop Wilton Gregory of Atlanta worried that hiring a spokesperson without real authority to speak quickly and decisively on fast-moving events would be counterproductive. “The spokesperson has to feel the confidence to make statements that won’t be undermined by one of us,” Gregory cautioned.

A final wrinkle: Dolan’s three-year term as USCCB president ends in November, and a new president may want to use Daniels in a different capacity, or not at all.