NEWARK, N.J. (RNS) Amid calls for a Vatican investigation, Newark Archbishop John J. Myers is facing fierce criticism for his handling of a priest who attended youth retreats and heard confessions from minors in defiance of a court-ordered lifetime ban on ministry to children. 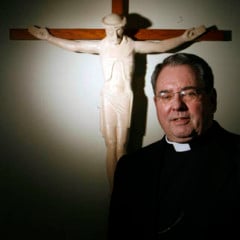 At St. Mary’s Catholic Church in Colts Neck, where the Rev. Michael Fugee had been spending time with a youth group, angry parishioners said they were never told about Fugee’s background, and they questioned Myers’ defense of the priest, the subject of a lengthy story in The Star-Ledger.

“It’s complete craziness that the church can let this happen,” said John Santulli, 38, a father of two at St. Mary’s. “I’m a softball coach, and I need a background check just to get on the field. Every single person I spoke to today said, ‘Oh my God. I didn’t know about this.’ It’s incomprehensible.”

Fugee, 52, is a priest of the Archdiocese of Newark and under Myers’ supervision. His work at St. Mary’s, however, was in the neighboring Diocese of Trenton, where Bishop David O’Connell has ordered the pastor of St. Mary to bar Fugee from any church activities, a spokeswoman said in a statement.

The bishop of the neighboring Diocese of Paterson, Arthur Serratelli, has likewise said Fugee was on a retreat at Lake Hopatcong without his permission.

For the first time in his many years as an advocate for victims of clergy sex abuse, Mark Crawford, state director of the Survivors Network of those Abused by Priests, called on the archbishop to resign, characterizing Fugee as the latest in a string of problem priests shielded by Myers.

“The archbishop continues to insist it’s fine for Fugee to work with children. It’s a very dangerous message,” Crawford said. “When will it be enough? When someone gets hurt? What does it take when you have a man who has admitted groping a child on more than one occasion?”

The Star-Ledger, too, called for Myers to step down in an editorial, saying the archbishop “has shown a pattern of leniency toward pedophiles, indifference to potential victims, and a haughty disdain for those who dare to question his judgment.”

Fugee was convicted in 2003 of criminal sexual contact for allegedly fondling a 14-year-old boy’s genitals on two occasions. Three years later, an appellate court vacated the verdict, ruling the trial judge should not have allowed jurors to hear the part of Fugee’s confession in which he described himself as homosexual or bisexual.

The rest of the confession was not called into question.

Rather than retry Fugee, prosecutors allowed him to enter a rehabilitation program for first-time offenders, on the condition that he undergo counseling for sex offenders and sign an agreement barring him from any work in which children are involved. The archdiocese’s vicar general, on behalf of Myers, signed the agreement as well.

Yet The Star-Ledger found Fugee has apparently violated that pledge with impunity, attending retreats and hearing confessions and traveling with members of the St. Mary youth group to Canada.

Jim Goodness, a spokesman for Myers, denied Fugee had broken the agreement because he was under the supervision of other priests and St. Mary’s two youth ministers, who are longtime friends with the priest.

“Father Fugee remains a priest who is allowed to be in ministry,” Goodness said Monday (April 29). “There is no change in his status at this point.”

Prosecutors have now launched an investigation into Fugee’s activities; that probe remains underway. If he is found to have violated the agreement, Fugee could face civil penalties, criminal charges or both, said Assistant Bergen County Prosecutor Demetra Maurice, assistant chief of the special victims unit.

Others are calling on the Vatican to launch an investigation of its own.

The Rev. James Connell, an influential Wisconsin priest who has pressed the church for greater transparency on issues of sexual abuse, emailed a letter to the Congregation for the Doctrine of the Faith, the Vatican office that has dealt with the abuse crisis in the Roman Catholic Church.

Connell, a canon lawyer and the former vice chancellor of the Archdiocese of Milwaukee, asked for an investigation into whether Myers violated canon law by failing to notify Rome of the abuse allegations against Fugee.

Connell also questioned whether Fugee should have been returned to ministry at all given the priest’s initial confession and then his willingness to enter the rehabilitation program. Connell calls that decision another admission of wrongdoing.

“The truth in this crisis has to come to light or we will never have true justice,” Connell said in a telephone interview. “We cannot expect there to be healing for the victims and survivors if we do not have that truth.”

The controversy has stirred the ire of rank-and-file Catholics with no connection to Fugee or St. Mary’s parish. Carolann Aschoff, a family attorney from Roseland, N.J., fired off her own letter to Pope Francis and started an online petition demanding Fugee’s reassignment and other measures for greater accountability and supervision in the church.

“Ignoring the agreement they made — ignoring common sense, ignoring prudence, ignoring the protection of children — is really beyond belief,” Aschoff said. “They’re being reckless, and no one should be reckless with children.”