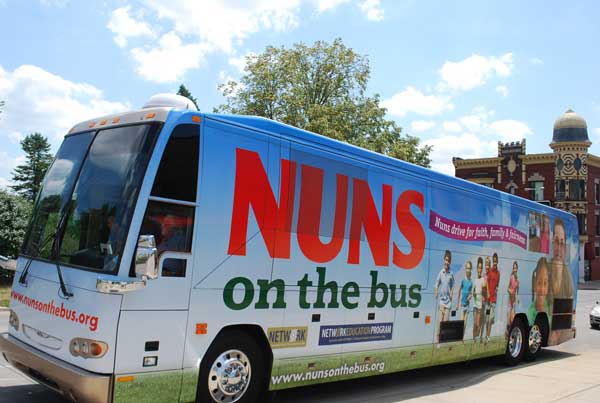 Nuns on the Bus arrives in downtown Janesville, WI on Tuesday June 19, 2012. RNS photo by Phil Haslanger
May 1, 2013
David Gibson

NEW YORK (RNS) The “Nuns on the Bus” are revving up their engines for another national campaign, only this time the Catholic sisters are taking their mobile platform for social justice along the country’s Southern border to push Congress to pass immigration reform. 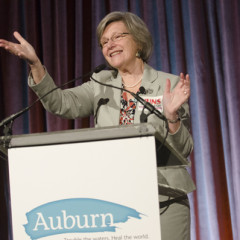 “The ‘Nuns on the Bus’ is going on the road again!” Sister Simone Campbell, head of the social justice lobby Network, told an enthusiastic gathering of faith leaders and charity activists at a Manhattan awards ceremony Wednesday (May 1). Photo by Angela Jimenez for Auburn

“The ‘Nuns on the Bus’ is going on the road again!” Sister Simone Campbell, head of the social justice lobby Network, told an enthusiastic gathering of faith leaders and charity activists at a Manhattan awards ceremony Wednesday (May 1).

“This time we’re going out for common-sense immigration reform,” she said to rousing applause.

Details of the latest tour are still to be announced, but the bus trip is expected to start at the end of the month, beginning in New York and winding up in California by way of Florida and the U.S. border with Mexico. The tour is to last about three weeks and comes at a crucial time for a potentially historic immigration reform bill that has run into roadblocks in Congress despite largely bipartisan support.

Campbell said she hopes that the timing of the tour, combined with popular support for immigration reform, will help the venture gain at least some of the attention garnered by their first tour last summer, when the bus -- "wrapped" in the "Nuns on the Bus" logo -- traveled 2,700 miles through nine states. Then the goal was to publicize the plight of the poor and unemployed as Congress considered a new federal budget bill.

The bus stopped at cities along the way, largely in recession-hit Midwestern states, where the sisters and the activists who joined the tour were met at their rallies by growing crowds and media attention.

The “Nuns on the Bus” became both a cultural touchstone and a political rallying point for Democrats during the presidential campaign; the sisters were compared to rock stars and Campbell appeared on news shows and “The Colbert Report,” and she was a prime-time speaker at the Democratic National Convention that nominated President Obama.

Campbell believes the right moment and the right issue are coinciding again, and like many longtime immigration reform advocates she is willing to back the current bill despite reservations.

“We want to amend it, yes, but we want to pass it. We don’t want to nitpick it to death. That’s what we did in 2007,” she said, referring to the previous attempt to overhaul immigration, which ended in failure.

The new “Nuns on the Bus” tour could also provide an opportunity for a breakthrough in church politics, since the nation’s Catholic bishops have also thrown their weight behind immigration reform, pushing for changes but putting a priority on getting the bill passed. 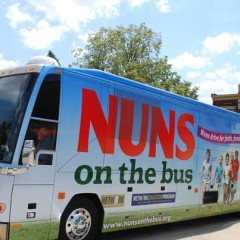 The bishops and the American nuns spent much of the past year at loggerheads following the announcement that the Vatican was investigating the main leadership group of U.S. sisters -- along with Network -- charging that the nuns were infected with strains of “radical feminism” and were focusing on social justice concerns at the expense of opposing abortion and gay marriage.

Many U.S. bishops also opposed Network’s lobbying on behalf of Obama’s health care reform plan, while others did not look kindly on Campbell’s social justice views and her activism during the presidential campaign.

But Campbell said Wednesday that she and the American bishops are on the same page on immigration reform, and she has invited them to join her group at stops along the way later this month and in June. “They don’t have to ride on the bus,” she said. “They can come stand with us at the events.”

Campbell made her announcement at a benefit breakfast sponsored by Auburn Theological Seminary in New York, which gave a “Lives of Commitment Award” to Campbell and two others.

They were: Lauren Bush Lauren, member of famous clans in politics and fashion who has dedicated herself to fighting world hunger; and Rep. Tammy Duckworth, D-Ill., an Iraq veteran who was the first disabled woman elected to the U.S. House of Representatives and an advocate for veterans and economic justice.