VATICAN CITY (RNS) In a bid to improve its checkered record on financial transparency, the Vatican on Tuesday (May 7) signed a cooperation agreement with the U.S. agency that fights against financial crimes. 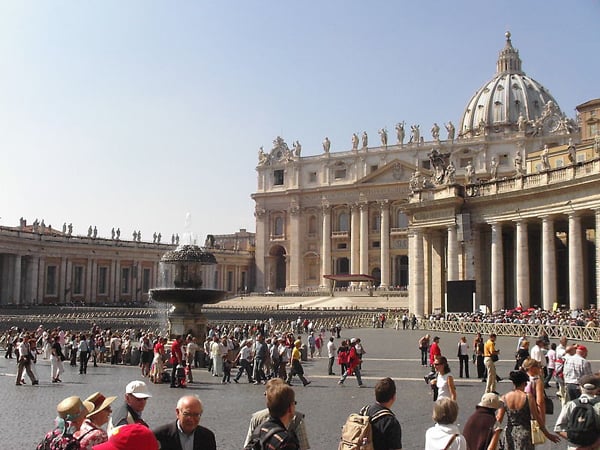 St. Peter’s Square – Rome. During the process to elect a new pope, Cardinals will stay in the Casa Santa Marta, a $20 million hotel-style residence inside the Vatican walls built by Pope John Paul II. Cardinals may not leave the Vatican grounds until a conclave concludes. RNS photo courtesy Wikimedia Commons (http://bit.ly/XqMJiW) / Public Domain.

The Vatican’s Institute for the Works of Religion, known as the Vatican Bank, has a long history of secrecy and scandals, and it has reportedly been involved in several shady operations during the course of its history. In recent years, top bank officials have been put under investigation by Italian magistrates for alleged money laundering.

For decades, the Vatican Bank operated outside of international oversight, thanks to the Holy See’s status as an independent state.

Facing increasing international scrutiny, the Vatican set up an independent financial watchdog, the Financial Intelligence Authority, in April 2011 as part of its effort to bring its financial practices in line with international standards.

The move was partially a consequence of new rules set by the European Union that threatened to shut the Vatican out of financial markets if it didn’t comply with international regulations against money laundering and the financing of terrorism.

The new memorandum of understanding between the Financial Information Authority and the U.S. Treasury Department’s Financial Crimes Enforcement Network will allow the Vatican to “strengthen its efforts to fight money laundering and terrorism financing globally,” according to a Vatican statement.

“This is a clear indication the Holy See and the Vatican City State take international responsibilities to combat money laundering and the financing of terrorism very seriously, and that we are cooperating at the highest levels,” said the director of the Vatican agency, Rene Brulhart.

“The Vatican has shown that it is a credible partner internationally and has made a clear commitment in the exchange of information in this fight.”

The Financial Intelligence Authority has signed information-sharing agreements with three other countries, and 20 more similar accords are currently being negotiated.

The Vatican Bank has assets estimated as high as $9 billion. Last year, it contributed with a $61 million gift to the Vatican budget.