(RNS) Oklahoma’s devastating tornado stirred up a theological debate that was set off from a series of deleted tweets referencing the Book of Job. 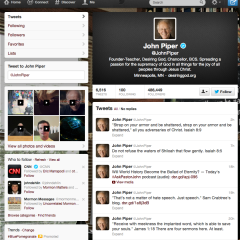 Popular evangelical author and speaker John Piper regularly tweets Bible verses, but two verses he tweeted after the tornado struck some as at best insensitive and at worst bad theology:

“Your sons and daughters were eating and a great wind struck the house, and it fell upon them, and they are dead.” Job 1:19

“Then Job arose and tore his robe and shaved his head and fell on the ground and worshiped.” Job 1:20

In the Book of Job, God allows Satan to afflict “blameless” Job, killing his 10 children, livestock and servants. While Piper’s tweets didn’t mention the tornado by name, critics said it was too close, and inappropriate.

Piper, who recently retired from the pulpit of Bethlehem Baptist Church in Minneapolis, is a leading theologian of the neo-Calvinist movement that’s sweeping many evangelical churches. In essence, Desiring God staffer Tony Reinke wrote, Piper was highlighting God’s sovereignty and that he is still worthy of worship in the midst of suffering and tragedy.

In response, popular evangelical writer Rachel Held Evans blasted Piper’s “abusive theology of  ‘deserved’ tragedy,” and said Christians have to stop the idea of responding to tragedy by suggesting God is inflicting his judgment.

“The only thing we need to tell them is, ‘I don’t know why this happened but God is good and God loves us,’” she said in an interview.

However, she apologized in a follow-up post. “Piper’s tweet was vague enough that I don’t know that he was necessarily saying this point this time. Maybe it wasn’t the best time to call him out.”

Piper, who has nearly a half a million followers, was unavailable for comment but he tweeted a brief explanation, saying in part: “My hope and prayer for Oklahoma is that the raw realism of Job’s losses will point us all to his God ‘compassionate and merciful.’”

“John realized last night pretty quickly that what gives him comfort in the wake of tragedy is not what resonates with everyone,” David Mathis, executive director of Piper’s Desiring God ministry, wrote in an email on Tuesday (May 21).

“The Christian church has to return to a robust understanding of who God is,” Wilson said in an interview. “If we do, we won’t have to hash through this with every tragedy.”

Author Philip Yancey said that the worst thing Christians could do is to be like Job’s friends, who tried to explain why God allowed tragedy to strike Job’s family.

“God endorses the confusion and even outrage that we feel when mysterious things happen,” Yancey said. “When suffering happens, it forces us to confront life in a different way than we normally do.”

Megachurch pastor Rick Warren tweeted a few days after the tornado, “In deep pain, people don’t need logic, advice, encouragement, or even Scripture. They just need you to show up and shut up.#Love.”

This is not the first time Piper has generated theological debate through Twitter. After blogger Justin Taylor suggested Rob Bell’s “Love Wins” book was universalist, Piper tweeted “Farewell Rob Bell” with a link to the post.

Piper also came under fire after suggesting in a blog post that a small tornado during a conference of the Evangelical Lutheran Church of America was a “gentle but firm warning” as it debated its position on homosexuality.