(RNS) The decision by the Boy Scouts of America to accept openly gay Scouts has raised the question: Are atheists and other nonbelievers — the only remaining group BSA still bans — next?

No one is holding their breath, least of all Neil Polzin, an Eagle Scout who was fired from his job in 2009 as an aquatics director at a Boy Scout camp in San Diego after he admitted to being an atheist. 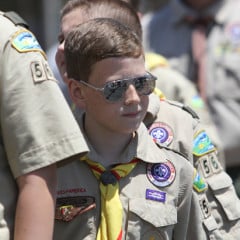 A Boy Scout marches with his troop during the Memorial Day parade in Smithtown, N.Y., May 27. RNS photo by Gregory A. Shemitz

“I don’t see that happening, at least not in the immediate future,” Polzin said. “The focus has always been on the Scouts’ discrimination against gays and it seems atheists were always on a back burner or not discussed at all.”

But that doesn’t mean nonbelievers — atheists, humanists and other nontheists — have abandoned their quest for inclusion. In the wake of the BSA’s May 23 vote that led to the inclusion of gay Scouts — but not gay scoutmasters — every major organization of nonbelievers has issued a statement condemning their continued exclusion.

A BSA official declined to comment, but issued a statement that said, in part, that since the organization had “just completed a lengthy review process, there are no plans for further review on this matter.”

The problem for atheists lies in an oath in which scouts promise to “do my duty to God and my country.” Some nonbelievers have suggested their sons change the word “God” to “good,” but the BSA has remained firm. Some atheist children have been asked to leave after years in Scouting when it was revealed that they did not believe in God.

That’s what happened to Margaret Downey’s son, Matthew, in the early 1990s. After seven years in the Scouts, he was forced to drop out — or lie about his disbelief in God. Downey filed a lawsuit on her son’s behalf, but it was soon made moot by the U.S. Supreme Court’s 2000 decision in Boy Scouts of America v. Dale which found that, as a private organization, the Boy Scouts can make their own membership rules.

Downey, now president of The Freethought Society, a group that advocates for nonbelievers, said she was not encouraged by last week’s vote.

“We have seen great success with the gay community, but they have fallen short of the goal” of total inclusion, she said. “We have an even more difficult road ahead of us because the nontheist community has been hated for so long that when we try to get respect and equality we are met with pure prejudice, and that is what we see the BSA doing.”

According to Andrew Koppelman, a law professor at Northwestern University and author of a book critical of the Supreme Court’s decision in the Dale case, religion was not a sticking point at the BSA’s founding in 1910. It became important during the Cold War fear of “godless communists” — the same time the phrase “under God” was added to the Pledge of Allegiance.

R. Chip Turner, national chairman of the BSA’s Religious Relationships Task Force, said after the recent vote that Scouting officials are committed to the “duty to God” language. “That is a core principle,” he said.

BSA bylaws declare the organization to be “nonsectarian,” and its bylaws and charter do not permit the exclusion of any boy — gay, atheist or otherwise. But sections in the Scout Oath have been interpreted to ban nonbelievers (“my duty to God”) and until recently, gays (“to keep myself … morally straight”).

For atheists to gain inclusion, Koppelman said, more than the Boy Scouts would have to change.

“Gays have changed from cultural pariahs to a group whose civil rights are taken seriously,” he said. “Atheists have been trying to do the same thing to some extent, but they have not been as successful as the gays. They would have to work hard to change the culture.”