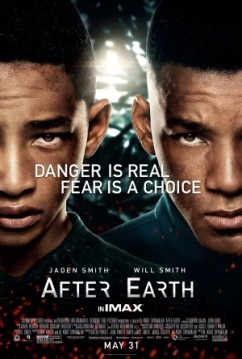 As the NYTimes reports, “After Earth” took in 18 percent less than the lowest of prerelease expectations and may have ended Smith’s reputation as a surefire action-adventure box office draw — not to mention hurting the budding career of son Jaden, his co-star. Oh, and how much further off track could M. Night Shyamalan’s career go? He used to pose big questions in intriguing ways, but he directed and co-wrote this movie, yet another flop for him.

The movie has been ripped in reviews, and may well add to the narrative of decline and crisis that has been surrounding Scientology: an exodus of members, tell-all books, lawsuits, celebrity scandals. Well, maybe Scientology IS like a real religion after all.

But the main difference may be that Scientology just isn’t watchable. “After Earth” appears destined to join John Travolta’s 2000 film “Battlefield Earth,” which aimed to introduce Scientology’s unusual cosmology to the public, as among the Worst Movies Ever.

This is ironic given the Hollywood DNA in Scientology’s genome — it draws celebrities like moths to a flame. It’s also odd in that biblically-based dramas — like the eponymously-named History Channel series, “The Bible,” are going gangbusters and spurring copycats.

Could it be that Scientology itself is the problem? Religions succeed in part because they tell a convincing story that undergirds the eternal truths they preach. Maybe Scientology doesn’t have such a coherent story, or one that is so easily told. Even “The Master,” the 2012 Paul Thomas Anderson drama that gives a fictionalized account of the life of Scientology founder L. Ron Hubbard (played by Philip Seymour Hoffman) got raves (and Oscar nominations) for acting and direction but still puzzled critics who weren’t sure what it was about.

Apropos, Ex-Scientologist Marc Headly explains some of the Scientology motifs in “After Earth,” including the display of “Robotic Emotions”:

Will Smith’s character is pretty much devoid of all emotions for the entire movie. While this may be part of his character or something that was directed in the script, in Scientology, one goes through great amounts of training and counseling to control one’s emotions and “mis-emotion,” as described by Hubbard. Anyone who has done even the smallest amount of Scientology training will recall sitting and staring at a person for hours on end without being allowed to blink, smile or turn one’s head. Will Smith pretty much masters that for the entirety of this movie.

Yeah, that’s not a formula for cinematic success, really.

Hence this passage from Will and Jaden Smith’s two-handed interview with New York Magazine:

Q: I’ve read that you believe life can be understood through patterns.

Will: I’m a student of patterns. At heart, I’m a physicist. I look at everything in my life as trying to find the single equation, the theory of everything.

Q: Do you think there is a single theory to everything?

Jaden: There’s definitely a theory to everything.

Will: When you find things that are tried and true for millennia, you can bet that it’s going to happen tomorrow.

Jaden: The sun coming up?

Will: The sun coming up, but even a little more. Like for Best Actor Oscars. Almost 90 percent of the time, it’s mental illness and historical figures, right? So, you can be pretty certain of that if you want to win—as a man; it’s very different for women. The patterns are all over the place, but for whatever reason, it’s really difficult to find the patterns in Best Actress.

Q: Do you see patterns too, Jaden?

Jaden: I think that there is that special equation for everything, but I don’t think our mathematics have evolved enough for us to even—I think there’s, like, a whole new mathematics that we’d have to learn to get that equation.

Will: I agree with that.

Jaden: It’s beyond mathematical. It’s, like, multidimensional mathematical, if you can sort of understand what I’m saying.

Q: Are both of you religious?

Will: No, we are students of world religion.

Maybe they need to study some more before their next film?

Donate Now!
Posted in
Arts & CultureBeliefsDavid Gibson: Sacred and ProfaneInstitutionsOpinion
Follow us on Facebook!
Submit your photos to RNS