“Nones,” Mainline Protestants, and Catholics are still the most likely to support same-sex marriage, but the percentages are up for every religious group. (Shutterstock.com/ http://tinyurl.com/kvcjeze)

A slideshow study released this week by the Pew Forum on Religion and Public Life shows that “Americans’ opinions on same-sex marriage have changed markedly since 2001,” when 57% of the overall U.S. population said they opposed the practice. Now, the tide has shifted so that half of Americans favor the practice and only 43% do not.

Particularly interesting is how the study breaks out by generation (essentially, the younger you are, the more likely you are to support gay marriage), gender (women are more in favor than men), and religion.

The highest rates of approval come from the rising numbers of “nones” in America, those who claim no religious affiliation. Roughly three in four now approve of same-sex marriage, up from about three in five in 2001. 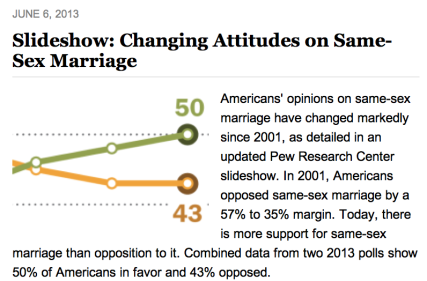 Screen shot of the Pew study released this week. The full slideshow can be seen at http://tinyurl.com/8ybqy5z.

Support among evangelical Protestants, both white and black, is higher than in 2001 but not at the same levels as other religious groups. In 2001, just 13% of white evangelicals favored same-sex marriage; now 23% do. And 32% of black Protestants approve of the practice, up only slightly from 30% in 2001.

Catholics and white mainline Protestants are almost in lockstep on the issue, with just over half approving.

I would have been interested to see where Mormons fared on this spectrum, but they are not included. (For a very thorough 2012 Pew survey of Mormons in American life, though, see here.)

On the political side, Republicans have made much of needing to court the “independent voter,” but indies approve gay marriage at a rate matching Democrats and almost twice that of Republicans. So on this social issue at least, the Republicans will have a tough sell in wooing independent voters.