WASHINGTON (RNS) As the House debates a bill to limit abortion, Republicans are reopening a subject that cost them dearly in 2012 and continues to present perils for the party’s attempt to appeal to women voters.

Even before the full House took up the bill Tuesday (June 18) to ban abortion after 20 weeks of pregnancy, Republicans had a sharp reminder of how sensitive the issue can be when Rep. Trent Franks, R-Ariz., appeared to say that rape rarely results in pregnancy. 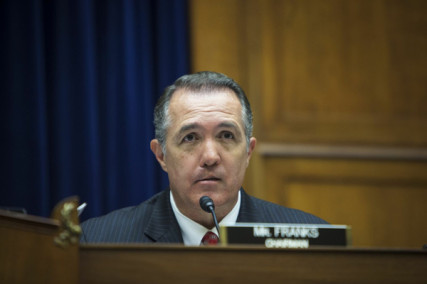 Rep. Trent Franks of Arizona speaks during a joint hearing of the Subcommittee on Economic Growth, Job Creation, and Regulatory Affairs and the Judiciary Committee Subcommittee on Constitution and Civil Justice. (May 2013) Photo courtesy Oversight and Reform via Flickr

“The incidence of rape resulting in pregnancy (is) very low,” Franks said at a June 12 committee hearing on the bill. Franks later said he meant that third-trimester abortions of pregnancies caused by rape are rare.

But for a party that has been blunt about its negative image with women, the controversy is like seeing a bad movie over again.

“Republicans should have learned a lesson as to how to talk and act more respectfully. Even this comes too close after the two previous problems. Stop anything on this topic that even comes close to being foolish and out of touch.”

The incident summoned up two previous embarrassments for the GOP: During his 2012 attempt to unseat Democratic Sen. Claire McCaskill, Missouri Republican Todd Akin said that women cannot get pregnant from “legitimate rape.” And in a February 2012 hearing over contraception coverage in employee health plans, Republicans called only men to testify.

The debate on the bill allows Democrats to continue the theme of a GOP “war on women” — House Minority Leader Nancy Pelosi called the legislation “disrespectful to the rights, health and safety of the American women.” And it will provide more microphone time during which Republicans may get into rhetorical hot water.

“Communications means taking your stand on the issues you believe in, but doing so in a way that brings people in instead of in a way that drives people out,” Fleischer said.

The bill may well pass the Republican-controlled House but would be unlikely to go far in the Democratic-controlled Senate.

In an interview with Roll Call, Rep. Charlie Dent, R-Pa., said it is a mistake for Republicans to bring the abortion bill up for a vote instead of focusing on economic issues. “The stupidity is simply staggering,” he said.

House Speaker John Boehner, R-Ohio, said the legislation was prompted as a response to the crimes committed at the Philadelphia abortion clinic run by Dr. Kermit Gosnell. “I think the legislation is appropriate,” Boehner said.

Republicans suffer because while Democrats have developed the “war on women” theme for their position on abortion, Republicans have no similar narrative for their efforts on the other side of the issue, says Marjorie Dannenfelser, president of Susan B. Anthony List, which contributes to anti-abortion women candidates.

“They’re shooting themselves in the foot because they haven’t created an overall narrative within which mistakes can be made.”

Republicans should be presenting their legislation in the context of protecting maternal and fetal health, she said, emphasizing “fairness toward the vulnerable – the vulnerable women in these clinics and the vulnerable late-term children who are being aborted.”

Akin’s “legitimate rape” comments, and a similar remark by Indiana Republican Richard Mourdock, were viewed by Republicans as costing them two reliable Senate seats in 2012. The 2014 elections, when Republicans again hope to take control of the Senate and make more gains in the House, are nearly a year and a half away.

Democratic groups will be sure to remind voters about the GOP efforts on abortion come election time.

“This isn’t about the Trent Franks of the world, this is about all the Republicans who are going to have to take this vote” on the House bill, says Marcy Stech of Emily’s List, which supports women candidates who favor abortion rights.

Posted in
Politics
Support RNS and get your donation doubled

News
Stay home, evangelical medical organization tells churches as COVID spreads
Opinion
The 2020 election was a referendum on race and Christian faith
Opinion
Joe Biden will remove the ‘bully’ from the bully pulpit
Signs of the Times
Once feared as Vatican meddling, Catholic ideas could help America move forward
News
Pope Francis attempts to tackle sexual abuse globally and in his own backyard