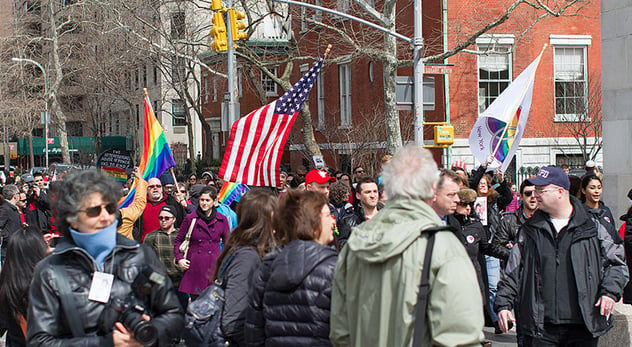 Such were the chants heard outside the United States Supreme Court today when it was announced that the highest judicial body in the nation voted 5-4 to strike down the Defense of Marriage Act (DOMA). That’s right. As of 10 a.m. EDT, there is no longer a federal law defining marriage as a union between a man and woman.

Of course, not every American is roundly rejoicing. Responses from the Christian community, which has become more divided over the issue in recent years, are mixed. Conservative Christians seem mostly  despondent while the progressives among them are mostly celebrating. I spoke with several prominent Christians from across the political spectrum today to get their reactions to the Court’s decision:

“This isn’t a matter of mere procedure federalism. The opinion grounds the unconstitutionality of DOMA in far-reaching categories of equal protection and human dignity. This moment offers opportunity for the church though. The gospel doesn’t need family values to flourish. The gospel advances best when it is in clear contrast to the culture around it. We may be in a time machine back to the Book of Acts culturally. Let’s be ready to get back to the Book of Acts spiritually too.”

David Gushee, Director of the Center for Theology and Public Life at Mercer University:

“US constitutional principles such as equal protection, in tandem with the fading plausibility of a traditional Christian understanding of marriage in secularizing North America, made today’s Supreme Court decisions inevitable. They also likely mean that a majority of US states will recognize gay marriages within ten or fifteen years. Christians can respond to this by howling in outrage, which some are already doing. Or they can decide to accept a clearer distinction between moral and legal norms and between church and state. They can consider whether to engage the contemporary conversation about how Christian principles of love and justice relate to sexual ethics and sexual minorities. And I hope Christians will realize the grave damage that their anti-gay activism has done to Christian witness in contemporary culture. Perhaps it is better to be known for what we are for rather than who we are against.”

“Today the Supreme Court ruled wrongly on both Windsor and Perry, but the decisions are not as bad as they might have been. The Court decided not to affirm same-sex marriage as a fundamental right, and left it to the states to determine the definition of marriage. The debate will continue at the local level, where already over thirty states have defined marriage as one woman and one man and a dozen have enacted same-sex marriage.”

Matthew Paul Turner, blogger and author of Churched: One Kids Journey Toward God Despite a Holy Mess:

“I’m thrilled by the Supreme Court’s decision to strike down DOMA. It’s a good and necessary step toward ensuring that our brothers and sisters in the GLBTQ communities enjoy equality under the laws of our country. And though I celebrate today’s news, I’m also very aware that this is just one step–a big step, no doubt–but just one step on a much longer journey toward equal rights within marriage. But I also know that, for a variety of reasons, religious and otherwise, many people are not celebrating today’s decision. So my prayer and hope is that God will grant all of us–regardless of which side we fall on–much grace for the journey before us, that we will learn to navigate future discussions about marriage equality with civility, respect, and humility. But most of all, may we pursue showing one another the same love that Christ shows to each of us. Because true equality is not defined by laws, it’s defined by the decisions and choices that each of us make. May God help us choose our next steps well.”

Albert Mohler, President of The Southern Baptist Theological Seminary and author of Culture Shift: The Battle for the Moral Heart of America:

“Today’s decisions are history-changing, but the DOMA decision is far more important than the decision in Proposition 8. Justice Kennedy’s majority opinion is, in its logic, a sweeping decision that makes the full legalization of same-sex marriage nationwide almost an inevitability. The Court’s decision in DOMA basically invites a future challenge to any state law that prohibits legal same-sex marriage. The Christian Church does not ask any human court what marriage is, and our main concern here should be the devastating social and personal costs of further undermining marriage. The great moral divide in this country over same-sex marriage, over marriage itself, and over sexual morality in general, is fully evident in these decisions and in the public’s response to them. Today, the Court took us to the precipice of same-sex marriage nationwide. For that reason alone, this day will be long remembered.”

Rachel Held Evans, blogger and author of A Year of Biblical Womanhood:

“For too long, LGBT people have been treated as second class citizens, both in the U.S., and even more tragically, in the Church. I’m happy for my LGBT friends and neighbors who see this as an affirmation of their equality as American citizens and dignity as human beings. Individual churches can still decide for themselves whether to marry gay couples, so this is not an infringement on civil liberties, but rather an extension of them. As sincere people of faith continue to disagree about how to respond to homosexuality, may we look to Jesus as our guide and be quick to listen, slow to speak, and slow to become angry.”

Jim Daly, President of Focus on the Family:

“The critical role of man-woman marriage is not diminished by these rulings today.  The essential need for children to have both a married mother and father is not lessened by the opinions.”

Justin Lee, President of the Gay Christian Network and author of Torn: Rescuing the Gospel from the Gays-vs-Christians Debate:

“Our work at the Gay Christian Network includes both those who support same-sex marriage and those who oppose it. It’s important for both sides to remember that, as C.S. Lewis once pointed out, marriage in the eyes of God isn’t always the same as marriage in the eyes of the state. I’d also caution Christians to focus more on people than on politics, and to consider the impact their words today may have on LGBT people who already think Christians hate them. This is an opportunity to show the love and grace of Christ in the midst of disagreement.”

“The typical Christian response has been to post on blogs, write articles, and send tweets to shout about our opinion and speak out against those who differ. That’s already happening. But, instead, I think we need to hold to what we believe and, without hiding our beliefs, we need to look for opportunities to have conversations, build relationships, and demonstrate grace. Regardless of the ruling from the Supreme Court, our churches have the same mission they did last week– to show and share the love of Christ.”

Many, like me, who’ve watched the public opinion polls in recent years predicted this day would come. Even among Christians, change has been afoot. According to Public Religion Research Institute (PRRI), 51% of white evangelical Protestants under the age of 35 support allowing gay and lesbian couples to marry, compared to 43% who are opposed. Three-quarters of Catholics under the age of 35 support same-sex marriage, compared to only 20% who are opposed.

“The Supreme Court decision today reflected the strong shifts we have seen in public opinion toward increased support for same-sex marriage, especially over the last decade,” Robert Jones told me. “What stands out most to me, since it is likely a window into the future of these debates, is the support among younger religious Americans for allowing gay and lesbian couples to marry legally, even among groups that have historically been the most opposed.”

For better or worse, the death of DOMA is only the beginning.