(RNS) In a centuries-old tradition, a young future deacon enters the Greek Orthodox sanctuary in Denver. The bishop blesses him in the name of the Father, Son and Holy Spirit.

Christopher Gilbert then is led by the priest three times around the altar, just as a groom leads his wife in an Orthodox wedding ceremony.

Gilbert, who has now become Deacon Chrysostomos, is marrying the church. But this marriage ceremony has an added symbolism.

That’s because the priest who leads the deacon is his also his father, the Rev. Matthew Gilbert of Salt Lake City’s Holy Trinity Greek Orthodox Church.

It is a poignant moment for the son.

“My first steps as a deacon,” Chrysostomos says, “were with him.”

And the experience will be replayed again in a few years, when Gilbert will lead another offspring, Aaron Gilbert, around the altar to take his own vows.

Was it nature or nurture that propelled two sons to dedicate their lives to the church as their priestly parent had? Father Matthew Gilbert leads the Agape Vespers service, which culminates the end of Holy Week festivities for the Orthodox Christian faith, at the Holy Trinity Cathedral in Salt Lake City on May 5, 2013. He is carrying a candle the symbolizes the light of Christ and is standing next to (left) a structure that symbolizes the tomb of Christ. Photo by Kim Raff | The Salt Lake Tribune

Being a priest wasn’t “something they saw and they liked,” said Denise Gilbert, Matthew Gilbert’s wife and the boys’ mother. “The two sons were literally born with an inherent desire to be priests.”

So genes may have had something to do with it.

For her husband, there was no ‘Aha!’ moment of decision, only an ineffable tug toward the priesthood.

Denise Gilbert also felt drawn to the priesthood from an early age.

“When I was a little girl, I would watch the priest serving the Divine Liturgy on Sunday mornings,” she says, “and I wanted a life like that.”

God heard “the desire of my heart,” she said, and drew her to Boston, where she met Matthew Gilbert, who had “a humility in him that I haven’t seen in very many others.”

Together, the couple reared six children — five boys and one daughter — in that church that gave them purpose and identity.

“God has been so merciful to us,” she says. “The least we can do is to give our children back to him.”

All six kids have chosen service-oriented careers — a nurse, a social worker, a public service lawyer, and the two priests. Another one is contemplating becoming an Orthodox monk, which would require him to live in a monastery.

Each path is different, even for the priest brothers — one has chosen lifelong celibacy and the other is engaged to be married. 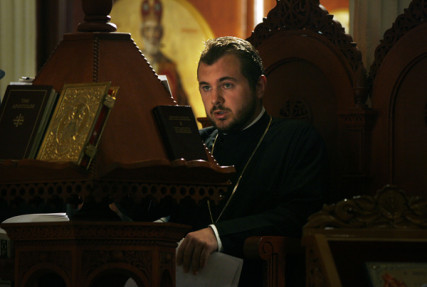 “Orthodox churches show no preference for one at the expense of the other,” according to the Orthodox Research Institute, an online reference library.

The church believes the choice dates to Christianity’s earliest days, when some of Jesus’ disciples were married and others were not.

The rules are clear: A priest can be married, but he must wed before he is ordained. If he divorces, he can remain a priest if he remains celibate. If he remarries, he loses his priesthood. Bishops, on the other hand, are still drawn from celibate priests (although most parish priests, such as Gilbert, are married). Monks are celibate too, and live together in communities.

The eldest child in the Gilbert family, Chrysostomos said the decision to be celibate was not difficult.

“I have felt called to this since I was a little boy,” he said. “I want to give my life to it for the rest of my days.”

When he was 11, young Christopher chanted during services when his father had no one else to do it. The son went on visits, met the sick and practiced intoning the holy Greek verses.

It was awe-inspiring, he said, to watch his gentle, keenly discerning dad act as “spiritual father” to the whole community, ministering to those in need during their most joyous times as well as through their deepest sorrows.

Now, the extroverted 28-year-old says, his father sometimes calls him for advice.

“Our roles have somewhat shifted,” he says, adding, “and matured.”

Soon it will be Aaron Gilbert’s turn.

Not long after he — the fifth child — was born, the family members settled first in Price, Utah, and then, in 1999, Salt Lake City.

Through it all, young Aaron sensed his own growing vocation for the priesthood, he said. “I always felt Christ calling me.”

So the quiet, studious young man graduated a year early from high school, so he could get started on his journey.

Aaron Gilbert left at 17 for Hellenic College Holy Cross Greek Orthodox School of Theology in Brookline, Mass., described as “the intellectual, educational and spiritual center of the Greek Orthodox Church in America,” where both his father and brother had studied.

He graduated this year and is home for the summer, where he — like his older brother once did — will accompany his father-priest through all his assignments.

Aaron Gilbert is similarly moved by watching his dad “doing God’s work with sincerity and earnestness.”

The Gilberts have a saying in their family: “Have love and travel the world while serving the church,” and that is exactly what the 21-year-old hopes to do.

He plans to marry in 2014 and be ordained a deacon soon after that.

The fourth child, Andrew Gilbert, may one day join his brothers in the priesthood, but as a monk.

Matthew and Denise Gilbert did not plan to have clergy among their children. It was not something they pushed or even encouraged.

But they do have another saying: What the child learns, the adult does not abandon.

That seems to have happened.

(Peggy Fletcher Stack writes for The Salt Lake Tribune, where a version of this story was published.)

News
In Greece, pandemic deprives refugees of vital link to food and locals
News
Émigré Russian Orthodox inch toward a return to Moscow Patriarchate
News
Virtual rituals give expat Greeks a chance to live out their faith from abroad
News
Greek Orthodox church in US gets 1st new leader in 20 years
News
Greeks bridle at historic deal to split Orthodox church from state
© Copyright 2020, Religion News Service. All rights reserved. Use of and/or registration on any portion of this site constitutes acceptance of our User Agreement and Privacy Policy, Privacy Statement and Cookie Notice. The material on this site may not be reproduced, distributed, transmitted, cached or otherwise used, except with the prior written permission of Religion News Service.