ST. LOUIS (RNS) Missouri Synod Lutherans from around the country will spend the next several days here for a national convention that will touch on a range of broad issues — from the future of Lutheran education to theological disputes over joint worship with other denominations. About 3,500 members of the Lutheran Church-Missouri Synod are expected to attend the convention, which begins Saturday (July 20) and runs through Thursday. Held every three years, the convention is the legislative assembly for the 2.3 million-member denomination, the nation’s second-largest Lutheran group.

The Rev. Matthew Harrison, recently re-elected as president of the synod, will chair the convention.

Harrison made national news in February, when he asked the pastor of a Lutheran church in Newtown, Conn., to apologize for participating in an interfaith prayer vigil in the wake of the Sandy Hook school massacre.

The synod’s constitution prohibits members from taking part in worship services that blend the beliefs and practices of Lutherans with those of other faiths and Christian denominations.

The prohibition on worshipping with other Christians stems from the synod’s 19th-century history in Germany, when its members were forced by the government to accept Calvinism against their will — and fled to the United States to preserve their religious freedom. 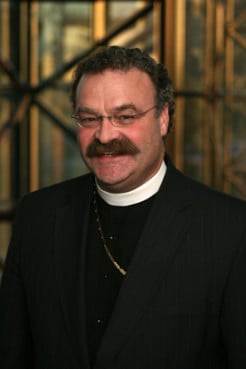 The Rev. Matthew Harrison was elected July 13 as the new president of the Lutheran Church-Missouri Synod. RNS photo courtesy LCMS

Harrison later apologized for his handling of the incident, which he called a “debacle.”

But the topic is still a sensitive one. The convention’s preparatory materials instruct that “we do not need to mention specifically” Newtown during the proceedings. The document also says Harrison’s office is preparing a study of the constitutional prohibition of blended worship that it “will roll out” in September.

“Arguing about Newtown on the floor of the convention will be counterproductive,” the materials say.

Two weeks ago, Harrison won a second three-year term with nearly twice as many votes — 66 percent of the total — as the other two candidates. Because of the changes introduced by his predecessor, the voting was conducted on the Internet for the first time in the church’s history.

Harrison’s fiery brand of conservatism was on full display in February 2012, when he declared during testimony before the U.S. House of Representatives, that the Department of Health and Human Services’ so-called contraception mandate was “a draconian violation of our First Amendment rights.”

Church officials said delegates will face plenty of work and debate. Among the issues: the synod’s record of disaster relief work, increased chances for evangelism in Africa, the 500th anniversary of the Reformation (coming in 2017), and ways to expand outreach to Hispanics.