The pope might have been talking about Fabio Mateus. 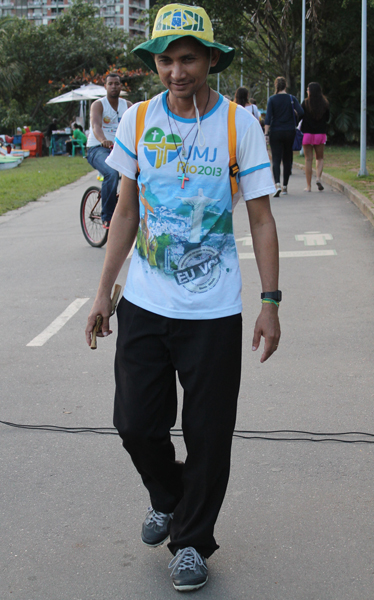 The 38-year-old married father of twin boys, made an extraordinary effort to see the pope. Saturday night he and millions of others slept on the beach following the vigil and watched the pink hue of dawn breaking on the Atlantic horizon.

It was the end of a long journey.

On March 15, Mateus packed a rucksack with a spare pair of sneakers, a raincoat, a hammock and $20 in his pocket, and started walking.

Mateus, who lives in Trairi, a city in northeast Brazil’s Ceara state, trekked 1,850 miles to Rio to see the pope.

Pilgrimages are a Brazilian tradition, built on a belief that to deepen religious experience a person must make sacrifices and suffer a degree of pain. About 8 million pilgrims visit Sao Paulo’s Basilica of Our Lady of Aparecida each year.

Mateus, who quit his job as an office administrator for a building company, said he preached the gospel message to everyone he met.

“The Lord revealed his mission to me about a year ago,” Mateus said. “He told me I should go to (World Youth Day), but I had to take a path like the New Testament apostles and preach the gospel in all the communities and homes I entered along the way.”

The number of Catholics in Brazil has shrunk to less than 65 percent of the population, and Mateus’ pilgrimage was, in part, an attempt, to rally slumbering believers.

“After seeing my friends leaving the church in my hometown for the past two years, I felt compelled to do something about it,” he said.

For 126 days, Mateus walked along busy motorways, refusing rides, and traversing about 24 miles a day, a grueling regimen of 10- to 12-hour marches. He arrived in Rio on July 18.

He said the example he set by walking in faith has been an awakening for many of the families and individuals he encountered.

By the time he arrived in Rio, news of his adventures had already gone before him. He was greeted by the organizers of World Youth Day and given a room to stay in Rio’s Metropolitan Saint Sebastian Cathedral.

“I was made to feel very special and the organizers even tried to arrange for me to see Pope Francis personally, but his schedule was so tight it was not possible,” Mateus said.

He did, however, get within two feet of touching Francis on three occasions when the pontiff left his popemobile to greet the crowds during his journey along Copacabana Beach.

Like thousands he participated in the activities and events that spanned the Catholic festival, including early morning catechisms held by the bishops and the free music performances around the city.

“My walk was about stepping out of my comfort zone, causing confusion by going beyond what the Catholic Church expected of me and challenging the role that it has in the communities I walked through,” he said.

Despite carrying a letter of recommendation signed by his parish priest asking other Catholic churches along the route to help him with food and shelter, Mateus said he didn’t always receive a warm welcome. He walked through four states — Ceara, Pernambuco, Bahia and Minas Gerais — before reaching the state of Rio, passing through 70 cities and towns.

“I had to string my hammock up between trees and sleep by the roadside during the night on a few occasions,” Mateus said.

He thanked God he did not encounter any danger or suffer any illnesses — not even calluses on his feet — along the way.

He was also grateful for media attention. Stories about him meant he was welcome in many homes; some drove out of their way to bring him food on the road.

“This journey has been an amazing pilgrimage for me. I have learned a lot about myself such as endurance and a deepening of my faith in God,” he said.

Mateus is already planning his next pilgrimage. Francis promised to return to Brazil in 2017, for the 300th anniversary of the apparition of the patron saint of Brazil, Our Lady of Aparecida.

“Pope Francis is an inspirational leader and I feel renewed and encouraged spiritually to keep on making a “mess” in my diocese,” he said, referring to the pope’s insistence that young people shake things up.

But before that, Mateus will be putting his feet up. He booked a bus ride home.