LUSAKA, Zambia (RNS) African Chief Jonathan Eshiloni Mumena will eagerly tell you about his ivory Star of David ring and the Texas flag on his tie. 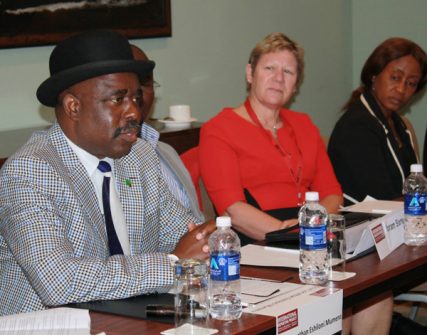 But Mumena’s real passion has recently turned to advocacy for adult circumcision to prevent the spread of HIV/AIDS.

In some African countries, tribes have shunned circumcision because it was seen as a Muslim practice or was simply considered primitive.

“We thought they were born differently and had to reconfigure the way they were,” said Mumena.

So the tribal chief was not prepared for his son’s declaration that he wanted to get circumcised. Mumena read the pamphlets on circumcision’s health benefits, which argue that the procedure cuts HIV transmission by 60 percent, and agreed with his 18-year-old son.

Mumena is among a growing number of Zambians opting for circumcision as a way to ward off HIV infection. In so doing, they are adding to the number of people who take on this ancient practice for cultural or religious reasons.

Mumena is also a Christian, and he is finding biblical justifications for circumcision.

“If it was good enough for God’s people in Leviticus, it is good enough for me,” he said. “I have made a stand for circumcision because of what the Bible has taught me. God demands good hygiene from his people as a way of living.”

Mumena attends an evangelical church and is also a lay preacher. His advocacy on behalf of circumcision has brought him attention from people like Microsoft founder and philanthropist Bill Gates, who has called Mumena one of Africa’s “true heroes.”

Circumcision has become a popular tool to fight HIV/AIDS and cervical cancer. In 2012, the Zambian Ministry of Health launched a national campaign to circumcise 2 million men by 2015. The U.S. President’s Emergency Plan for AIDS Relief has committed another $11.4 million to support Zambia’s efforts, on top of an original $18 million.

“Male circumcision is the best vaccine in Africa,” says Dr. Manasseh Phiri, a Zambian HIV/AIDS activist who was inspired by Mumena to get circumcised.

In Zambia, 13 percent of adults have been infected with HIV, compared with nations like Swaziland (26%), Botswana (23%) and South Africa (17%), according to the United Nations.

Circumcision is not just a male issue, Phiri said. Women are beginning to demand it as a way to stem cervical cancer from spreading.

“If we can change individual behavior at the bedroom level, we can have this cracked,” he said.

“We in the West right now are fixated on male circumcision in the same way we were fixated on bed nets for malaria,” Thuma said. “It’s only one of many things.”

Health experts also explain that circumcision is not a magic bullet. Some men assume that if they are circumcised, they have almost no risk of contracting HIV.

“Male circumcision is just part and parcel of all the strategies,” said Albert Mwango of Zambia’s Ministry of Health. “It is only useful if the other risk reductions are taken into account.” Other strategies include use of condoms, a controversial method for many faith-based health organizations.

It’s difficult to measure how many have followed in his footsteps, Mumena said, but he sees changes being made.

“I can safely conclude that we have had people circumcised from every tribe because now it has become the ‘in’ thing,” Mumena said.

Described as the best-dressed chief in Zambia by Thuma, Mumena offers some flair with his wardrobe. The Texas flag on the chief’s tie? He became an honorary resident of Abilene, Texas. And the Star of David jewelry? Like many evangelicals, he just loves Israel.

Mumena may cite his faith to promote circumcision, but he’s also eager to suggest it as a practice for everyone, irrespective of religion.

“It doesn’t matter whether we’re Christians, if we believe in the faith, or not,” he said. “HIV/AIDS respects no religion. It’s about survival.”

(Sarah Pulliam Bailey reported on HIV/AIDS, tuberculosis, and malaria in Zambia with the International Reporting Project.)

News
Kenyan Methodists defy ban on campaigning at church, saying ‘humans are political’
Follow us on Facebook!
Submit your photos to RNS