(RNS) When Marguerite La Joy Washington, a freshman at Dillard University, was gunned down in New Orleans, it had all the appearance of business as usual. Thousands of young blacks are killed in America each year. 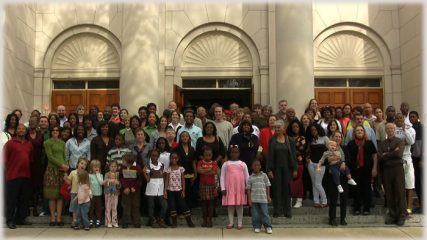 But if you had attended Marguerite’s funeral at First Grace United Methodist Church, where she taught Sunday School, you would have realized that something was different.

Instead of the nearly all-black affair you would expect in too much of America, the crowd — so large that it spilled out into the streets — was half white.

“It was a defining moment for our congregation,” the Rev. Shawn Anglim recalls. “The whole church was there. It was like they were saying, ‘This is our family. Our child.'”

The Trayvon Martin case, and the events surrounding it, have reminded us that America remains a racially divided nation. And while our faith traditions sometimes enable us to stretch beyond our ordinary vision and frailties, 11 o’clock on Sunday remains the “most segregated hour” in America, as Martin Luther King Jr. famously put it. Even today, only about 5 percent of the nation’s churches are racially integrated.

Then, there is First Grace.

First Grace is the story of two congregations — one black, the other white — that merged in the aftermath of a great storm and proved that King’s dream of “the beloved community” remains a possibility.

In the chaotic aftermath of Hurricane Katrina in 2005, a circuit-riding pastor and several brave lay people decided to take a chance. They would merge these two churches. First Methodist and Grace Methodist would become First Grace.

The first Sunday they worshipped together, there were only 60 of them. Half black, half white, all a bit nervous. Today, there are hundreds. They are even more diverse than before, and they are joyful. The pastor is white. The minister of music and chair of the church council are black. Latinos and Haitians hold other positions of leadership. They have an intentional community of young adults, black, white and brown, who actually live at the church. No one is hungry. No one goes without legal or medical care. No one is alone.

“There’s nothing special about the people at First Grace,” Anglim says. “They’re ordinary Americans just like anybody else. But they have decided to move in together. To become one body.”

How has First Grace bridged this societal fissure that seems so daunting to the rest of the county? “We listen,” Anglim says. “It is the first act of love.” He pauses, then continues: “People don’t realize how brutal they can be. We act according to the way our minds have been shaped by our parents, our culture, our personal experiences. For black people and white people, those differences can be vast. So we begin by listening. And we do things together.”

The church’s outreach ministries include a medical clinic, a halfway house, a feeding program and a new legal clinic. When you’re caught up in the mission, you don’t have time to worry about the color of somebody’s skin.

Anglim tells me that the parishioners at First Grace still struggle. Even fight. “But,” he says, “we know each other. We have names.”

Religious people like to speak of the “Kingdom of God.” First Grace could be what that kingdom looks like. It is black, white and brown. Rich and poor. Gay and straight. Democrat and Republican. I’ve visited their church, and when they “pass the peace,” greeting one another in the name of Christ, it is difficult to restore order. That’s how much they love being together. First Grace shows us that our multiracial nation not only can survive. It can thrive.

Oh, and there’s one more thing. Marguerite’s mother, Margaret Ferguson Washington, a civil rights veteran and pillar of the church, has a new friend. A young woman called Washington shortly after her daughter’s death and asked whether she had anybody to accompany her to the arraignment of the man accused of the attack. She did not.

“Might I go with you?” the young woman asked. Washington said she could. Since then, the young woman has accompanied her to every motion, every hearing, every court appearance. Seeing them together, and their natural affection, you might even get the impression that the girl is Washington’s daughter.

Except that she’s white.

(Oliver Thomas is a member of USA TODAY’s Board of Contributors and author of “10 Things Your Minister Wants to Tell You.”)

Opinion
From Katrina to COVID, American crises expose racial injustice again and again
Opinion
An American Muslim imam’s letter to the American Sikh community
Spiritual Politics
Jason Berry’s spiritual counter-narrative
Apple
Where are the condemnations of Harvey as God’s punishment?
Martini Judaism
Holocaust, climate change — when did we know, what did we do?
© Copyright 2020, Religion News Service. All rights reserved. Use of and/or registration on any portion of this site constitutes acceptance of our User Agreement and Privacy Policy, Privacy Statement and Cookie Notice. The material on this site may not be reproduced, distributed, transmitted, cached or otherwise used, except with the prior written permission of Religion News Service.