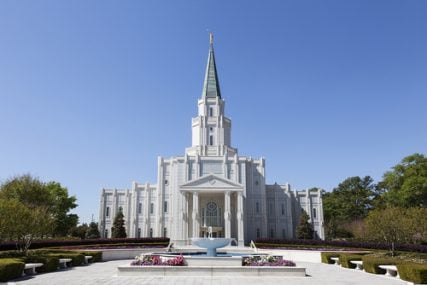 The LDS Church unveiled a new temple movie last week. It will be shown in temples around the world, including this one in Houston, Texas.

Last week, the LDS Church launched a new version of the temple movie that is shown during the endowment ceremony in all but two of 141 temples around the world. (In the Salt Lake City and Manti temples, the ritual is still performed by live actors.)

The new film will gradually replace one that has been used since 1990, which supplanted an earlier version that incorporated part of Disney’s Fantasia for the creation scenes.

Ears have perked up at this news. Why a new film? Why now? What has changed?

Not a lot, apparently. Whereas the last temple movie’s debut accompanied major changes to the text and action of the endowment ceremony itself, the Deseret News noted yesterday that the Church has confirmed there are “no changes to the script” this time around.

According to the blog Wheat and Tares, the new film features more pauses and makes the endowment ceremony take another fifteen minutes. Guy Templeton writes:

From what I understand, as the church has introduced more temples to Africa, they’ve discovered that some African languages require more words to get explain the temple ceremony.  So, the church has modified the entire ceremony, allowing more pauses to accommodate the African saints.  This makes the ceremony about 15 minutes longer.  Many temples had endowment ceremonies every 30 minutes, but due to the longer length of the endowment presentation, the church is encouraging temples to schedule sessions every hour.  Some temples are experimenting with scheduling to see if they can do sessions more often, but this is leading to challenges.

If this is true, I am delighted that the Church changed the entire movie to accommodate the Saints in Africa, where Mormonism is growing rapidly but where retention of converts is a huge problem. It seems to me that making the temple ceremony as accommodating as possible for the Saints there is exactly what the Church should be doing.

However, there is also a missed opportunity here. According to a few people I know who went to the temple last week, there are no visible changes that would make African or African American Mormons feel more at home in the ceremony.

In other words, every single person in the movie is still white. The production values are better, the music is improved . . . and that’s about it. As one person put it to me, “It’s exactly the same except that Adam, Eve, and Satan all have better hair.”

It would be lovely if Saints around the world could see themselves in the Endowment ceremony, just as white American Mormons are privileged to do every time they attend the temple. As Mormonism moves toward globalization, this is bound to happen eventually, whether through films that employ local actors of color or through following the live actor model.