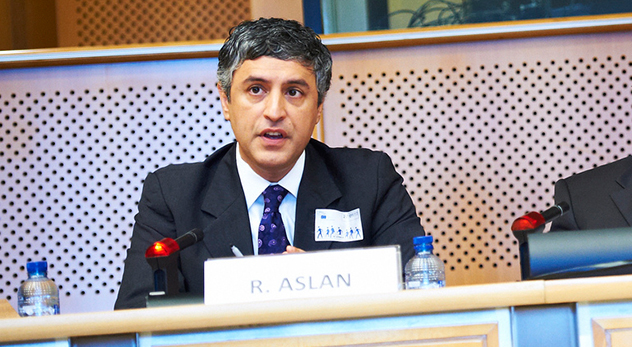 The real lesson Reza Aslan teaches us has less to do with history than you might expect. – Image courtesy of Security and Defence Agenda: http://bit.ly/19JB071

Ten excruciating minutes. This is all it took for Fox News to turn Reza Aslan into a New York Times bestselling author.

If you’ve been stranded on an island without internet access you may not have seen the interview where Lauren Green, chief religion correspondent for Fox News, repeatedly asked Aslan on her “Spirited Debate” segment whether he, a Muslim, was qualified to write an unbiased book on the founder of Christianity. It’s an admittedly bad question, but Aslan’s responses weren’t much better. Rather than offer substantive information about his book, the author of Zealot: The Life and Times of Jesus of Nazareth chose instead to recite his curriculum vitae. At times, it felt like he was applying for an academic fellowship rather than doing a cable news interview.

Aslan’s publicist couldn’t have planned it better. The video went viral— viewed more than six million times across platforms—while Aslan amassed thousands of new twitter followers and his book shot to number one on Amazon. A nasty interview on Fox News is the stuff every liberal author’s dreams are made of.

The results were less favorable for Green, who has been chided by commentators and Fox News haters throughout the media and across the web.

But Green’s trainwreck and Aslan’s triumph also represents a terribly missed opportunity for viewers. Had Green chosen a better set of questions or had Aslan opted for more informative answers, the public might have actually learned what Zealot asserts. In so doing, they would have seen more clearly that the book’s arguments aren’t all that shocking, novel, or new. They’ve been hashed and rehashed in the so-called “Jesus Wars,” efforts made by scholars over the last several centuries to understand the demystified, historical Jesus.

As Charlotte Allen noted in the L.A. Times, you’ll find similar arguments about Jesus in Geza Vermes’ Jesus the Jew (1973), John Dominic Crossan’s The Historical Jesus: The Life of a Mediterranean Jewish Peasant (1992), or among those involved with the Jesus Seminar of the 1980s and 1990s.

“You won’t find much new in Aslan’s book,” Allen said.

Ross Douthat, author of Bad Religion: How We Became a Nation of Heretics, argued in his New York Times opinion column that Aslan’s theses are even dustier: “Aslan’s book offers a more engaging version of the argument Reimarus made 250 years ago.”

Whether the arguments are 30 years old or 250 matters little. The fact remains that Aslan hasn’t added much ammunition to either side in the so-called “Jesus Wars.” Instead, the book is, in the words of Adam Gopnik of The New Yorker, “a pugnaciously written, unduly self-assured, and, on the whole, extremely conventional view of the historical Jesus, already familiar to those who keep up with contemporary Jesus studies.”

The most surprising thing about Aslan’s Zealot, as it turns out, is how unsurprising the book actually is. And yet, the furor created over this bit of new(ish) scholarship has created an opportunity for those who claim to follow the Biblical Christ to reflect on why they’ve chosen to do so.

Those who, like me, call themselves Christians, are not merely students of history, but rather participants in an ancient and mysterious faith. We are people who bury our faces in the shoulder of a real, historical Jesus who actually lived, yes. But we are also people who have ongoing interactions with a living, breathing God. Christians claim to follow a Jesus who didn’t just live in time past, but one who exists even today. This Jesus is still speaking and healing and working miracles. He is doling out the good gifts of grace and mercy and hope and even faith itself.

Recognizing that Christians serve a living God and not merely a historical figure is not a coy way of avoiding the debate. It’s a way of bridging the gap between the historian and the believer. As Luke Timothy Johnson of Emory University points out,

When someone is dead, even someone we knew alive, we may be able to learn more about him or her as time goes by…When someone is still living and we are in relationship with that person, our knowledge of that person is more multiform than in the case of someone dead. In addition to the documentary record and the memories of others—data available to us about all people, living and dead—new data is still coming in.

As a result of our continued contact, those who follow Jesus have a growing knowledge of God. His deeds have not ended, and his record is not complete.

To be a Christian means to assert that Jesus is a living God, not one of a hundred first century zealots or a dead dime-a-dozen philosopher. We pray “Come, Lord Jesus,” (Rev 22:20) and thereby confess that Jesus cannot be completely excavated with the tools of the historian. He must be experienced in the now.

Reza Aslan isn’t the first scholar to challenge the Christian conception of Jesus, and he won’t be the last. When the next one emerges, may those bear the name of Christ claim to follow a Lord who is more than a static, once-upon-a-time historical figure. He’s a living God who miraculously draws us in even all these years later.